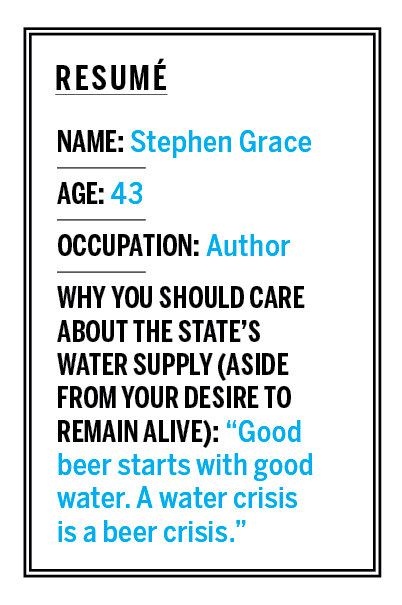 Having poured everything into Dam Nation: How Water Shaped the West and Will Determine its Future (a finalist for the 2013 Colorado Book Award), Stephen Grace figured that—at least when it came to water—he was dry. But then filmmaker Jim Havey asked him to write the script for a documentary about the past, present, and future of water in Colorado. The resulting film, The Great Divide, which premieres on August 31 on Denver’s NBC affiliate, produced enough material for a companion book of the same name. Here, the Salida-based author explains why current water usage doesn’t hold…well, why it’s got to change.

Early in the book, you mention the “illusion of profusion.” Is that what The Great Divide hopes to dispel?

Oh sure. There’s a wonderful film by Kirk Klancke, president of the Colorado River Headwaters Chapter of Trout Unlimited. He goes out on the 16th Street Mall and asks people where their water comes from. Nine out of 10 say the faucet—and they’re not kidding. It’s immensely complicated getting water to our faucets. And there are repercussions to how we use water.

What are those repercussions?

Most of [Colorado’s] population lives on the Front Range, but most of the water is on the Western Slope. Historically we’ve moved water from the west to the east, in so-called transbasin diversions. It helps us grow tremendous metropolitan areas and has fostered an incredibly productive agricultural sector on the Front Range. But there are consequences for that on the Western Slope.

What kind of trouble are we looking at?

Just below Windy Gap Reservoir, near Granby, the Colorado River is depleted. That’s changed the structure of the streambed and temperature of the water, creating effects such as the loss of 38 percent of the aquatic insect species; a native fish called the mottled sculpin is gone; and the local Gold Medal trout fishery is in serious decline.

What about for people? The state government predicts there will be a gap between how much water Colorado has and how much it needs by 2030.

That gap is real, and it’s been the impetus for an enormous amount of statewide activity culminating in Colorado’s Water Plan [a compromise among agricultural, environmental, recreational, and business interests for how to best share resources], which goes to Governor John Hickenlooper’s desk in December. Basically there are going to have to be serious changes in the state.

Let’s hope not. It’s almost inevitable that we’ll solve our water problems in a way that allows our civilization to survive. Right now, around 85 percent of the state’s water goes to agriculture. So you could take a lot of that and find ways to transfer it to cities. But most Coloradans don’t want to see agriculture disappear.

What are you optimistic about?

The Upper Colorado River Basin has been an area of conflict for many decades. But in 2013, Western Slope entities and Denver Water—groups that have been at odds, historically—hammered out the Colorado River Cooperative Agreement [to protect watersheds in the Colorado River Basin and divert more water to the Front Range]. These things are hard won. It’s not like it happened overnight, but it’s entirely due to the people involved and their level of commitment. I see problems on the horizon. I also see the evidence of very promising collaborative approaches and tremendous selflessness.

How did you become interested in water usage in Colorado?

I became something of a reluctant water writer. I was working in China and was bouncing some ideas around with my editor, who had just taken over a branch of a publishing house focused on the American West. And she said, “Hey, I think you should write about something focused on the American West. How about water, water issues, water rights?” And I thought, OK, well, that’s something I know absolutely nothing about. I started looking into it and basically fell down the rabbit hole. There certainly wasn’t any lack of books on American water, but I found most of them were written by specialists and were really daunting for the general public. I approached it as a layperson and unpacked some of the esoteric ideas of Western water law, the arcane history of water, and the science behind it. That was the genesis of DamNation.

How did Jim Havey talk you into this project?

Jim’s idea behind the film, and it’s a good one, is what drew me on board. He wanted to create a resource for Coloradans now and in the future to help them appreciate their water heritage and to give them some tools to understand water issues and how to move forward. Well, if we had a book for that, we can have another resource to supplement the film and tell the story in a different way.

What are some other water issues we should be worried about?

We’ve certainly been plagued by epic droughts in our past: the Dust Bowl days, the drought of the 1950s, and more recently the droughts of 2002 and 2012. All of these events really strained our resources and the agricultural industry to the tipping point. …If we go back even further, scientists have found that there were droughts in prehistory that were much more extreme than anything we’ve experienced in the historical records. Droughts of incredible, almost unthinkable severity—something like the Dust Bowl, but lasting half a century. It’s very likely that we’ll be visited by episodes like that again. What scientists have found is that when we settled the American West, when we built our cities and farms here, we actually were in an unusually wet period.