Lower attendance and less glitz marked this year’s Sundance Film Festival, which suited Colorado indie-film buffs just fine. In fact, several local industry leaders who made the annual trek to Park City, Utah, a couple weeks back were relieved to find a festival experience reminiscent of the “old” days: a focus on fresh voices, emerging talent and smaller budget films with a more authentic feel. Turning the cinematic lens back home, four Colorado film programmers share their favorite picks from this year’s festival. If we’re lucky, we’ll be seeing them in our local theaters sometime this year.

Britta Erickson, festival director Starz Denver Film Festival Art & Copy: This U.S. feature documentary directed by Doug Pray looks at the most influential creative forces in the advertising industry and explores the importance of spaces that encourage creative thinking. “I’ve always said that if I walk into an ad firm and there is no ping-pong, foosball or dog, then it’s not a legitimate agency!” Erickson says jokingly. The film was picked up by Arthouse Films for future distribution. 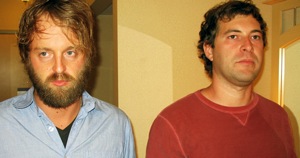 Humpday (pictured): This U.S. narrative feature written and directed by Lynn Shelton delves into the convoluted emotions between two straight guys who share a close connection. Told through witty and authentic dialogue–mostly adlibbed–the film takes a female look at a “bromance” testing its limits and maybe beyond (no spoilers here!). It won the Sundance Special Jury Prize for Spirit of Independence and was picked up by Magnolia. Pictured: Joshua Leonard and Mark Duplass co-star. Sin Nombre: This narrative feature debut, written and directed by Cary Joji Fukunaga, is a social-political thriller set on the U.S.-Mexico border. “It’s about the consequences of bad choices, where you see how a young kid can become a killer. It’s tragic, yet it’s also a love story beautifully told,” Erickson says. The film is the recipient of the Sundance Directing Award for U.S. Dramatic, and the Excellence in Cinematography Award for U.S. Dramatic. Pablo Kjolseth, director International Film Series, University of Colorado, Boulder 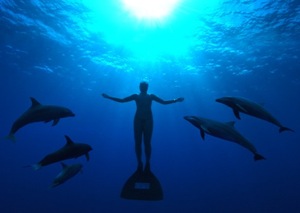 The Cove (pictured): Director Louie Psihoyos uses state-of-the-art technologies to expose the tragic capturing and slaughtering of dolphins in Taijii, Japan. “Part action and part adventure film, this fascinating documentary was made by a Boulder, Colorado-based crew, who argue that dolphins are intelligent, sentient beings with a consciousness and should not be slaughtered,” says Kjolseth. It received the Sundance Audience Award for U.S. Documentary. Johnny Mad Dog: This international narrative feature from France, Liberia, and Belgium was written and directed by Jean-StÃ©phane Sauvaire. It’s based on a book about a war in an unnamed African country, and its unrelenting depiction of the atrocities of war, as well as the use of real child soldiers as actors, makes for powerful and authentic storytelling, Kjolseth says. Stingray Sam: Directed by Cory McAbee, this six-part series, comprised of 10-minute episodes, is a musical space-Western designed for screens as small as your cell phone. This work was developed as part of Sundance’s New Frontier exhibit, showcasing different ways filmmakers are using new multimedia technologies to engage viewers. Michael Liss, director of development and film programmer Vail Film Festival 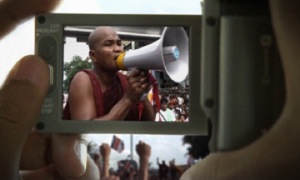 Burma VJ (pictured): In September 2007, Buddhist monks led a peaceful yet massive protest against Burma’s dictatorship regime–news the Burmese government tried to suppress by barring foreign media and shutting down the Internet. Directed by Danish filmmaker Anders Ã˜stergaard, this documentary features hand-held footage gathered by a courageous group of local reporters, known as the Burma VJs. The film received the World Cinema Documentary Editing Award. Sergio: Directed by Greg Barker and edited by Karen Schmeer, this documentary retells the rescue efforts that followed the historically defining moment when a bomb struck the U.N. headquarters in Baghdad on August 19, 2003. The film is a compelling example of an unsung hero who dedicated his life to human rights. It received the U.S. Documentary Editing Award. September Issue: Director R.J. Cutler delivers a rare insider account of the nine months leading up to the printing of the highly anticipated 2007 September issue of Vogue magazine. The film, recipient of Sundance’s Excellence in Cinematography Award for U.S. Documentary, closely follows Anna Wintour, who has reigned as the magazine’s notorious editor-in-chief for the past two decades. Chuck Lomis, senior manager of film evaluations Starz Entertainment 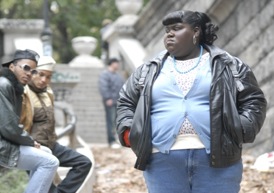 Push: Based on the Novel by Sapphire (pictured): Lee Daniels’ latest effort stars Mo’Nique, Mariah Carey, Paula Patton, and newcomer Gabourey Sidibe. This Harlem story of survival and hope swept this year’s Sundance awards, earning the Grand Jury Prize for Dramatic, the Audience Award for Dramatic and a Special Jury Prize for Acting presented to Mo’Nique. Push was produced by Colorado native Sarah Siegel-Magness. Pictured: Gabourey Sidibe as Precious Jones. An Education: Directed by Lone Scherfig with a smartly written script by Nick Hornby, this film stars young English actress Carey Mulligan–who is creating a buzz as the next “it” girl reminiscent of Audrey Hepburn. Also starring Peter Sarsgaard, Alfred Molina, and Emma Thompson, this coming-of-age film is set in 1960s London. It was picked up by Sony Classics and received Sundance’s World Cinema Audience Award in Dramatic and the World Cinema Cinematography Award in Dramatic. In the Loop, directed by Armando Iannucci, is a mockumentary-style comedy about the road leading up to the Iraq War told through the eyes of the Brits. As hilarious as similar genre flicks (think Best in Show), In the Loop stars James Gandolfini and was picked up by IFC Films. All photos are courtesy of the Sundance Film Festival.