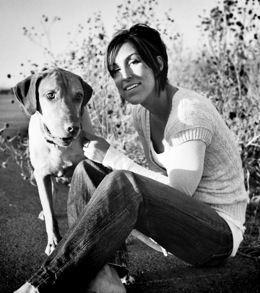 My family’s roots run deep through desert country, the perfect setting for a recurring nightmare like mine. It begins as I’m falling asleep in my childhood bedroom, looking sleepily out the window through the sheer purple curtains, the only barrier between my room and the outdoors.

I can see his glowing red eyes dotting the foothills. Slipping through the desert’s dry and dusty air, he silently winds his way to my house. Afraid to move from my bed, I glimpse a creature with the body of a man and a shrewd coyote head leaping onto my third-floor balcony. He sniffs the air and scans my dark room.

Is he looking for me? I can’t breathe. I watch. I wait. Then I feel his beady red eyes rest on my back. He knows I’m here.

Then I wake up.

This coyote man has fed my coyote-phobia for 18 years, but when a coyote attacked my good friend last week, I started to see things a little differently.

As they do every morning at 7 a.m., Amanda and her dog, Rufus (pictured), were playing Frisbee in the open space near their Broomfield home when two coyotes charged her.

Realizing that the pair wasn’t eager to join the Frisbee game, Amanda blocked the larger coyote with her arm as it lunged toward her, nipping her arm. She yelled for help, and Rufus came to the rescue.

“He was like a crazy dog trying to get them away from me. I was mostly worried about Ruf because they were trying to go after him too. But we’re both totally fine,” she told me about an hour later, over the phone.

The Denver Post told Amanda’s story that morning, and Rufus instantly became a hero across the Front Range. Coyotes, on the other hand, became more horrifying.

Coyotes are common in rural subdivisions like Anthem Highlands, Amanda’s north Broomfield neighborhood, where she spots mostly harmless coyotes “all the time”–and they’d never bothered her.

So why now? And more importantly, how can I avoid being attacked by coyotes–my worst nightmare?

Historically, coyotes have been the scorn of the West, perhaps because of their diehard persistence. For us city-folk, they’re like squirrels but more determined–and bigger. In fact, coyotes have been known to eat squirrels for dinner. They’re arguably the most adaptable animals in North America, and they don’t go away. Let me say that again: They aren’t going away.

When a coyote is killed, the pack will reproduce to bring its numbers up again. If they’re relocated, they will either find their way back to where they came from or die trying.

When neighborhoods like Anthem Highlands spread across wilderness or rural farmland, the coyotes stick around and adapt perhaps too well to the sprawling city.

“They aren’t shot at or shown any aggression by people who live in these neighborhoods,” says Jennifer Churchill, the public information officer for the northeast region of Colorado’s Division of Wildlife. “Farmers and ranchers will shoot at them so they are very afraid of humans in really rural areas.”

That’s not the culture, however, of Denver’s â€˜burbs.

Between February and March, the mating season, coyotes can be more aggressive and territorial. Human attacks in Colorado are rare, but this season there’s been more activity than usual. “Typically we see one [coyote attack] each year,” Churchill says. “We’ve seen coyotes getting into trouble earlier this year.”

Almost two months ago, on December 4, a coyote attacked a nine-year-old boy at Erie’s Vista Ridge Golf Course, which is literally across the street from Anthem Highlands. Shortly after the attack, the DOW found a coyote in the area, killed it, and took it to a laboratory for testing–a standard procedure after human attacks.

“Our primary concern is human safety,” says Churchill. “We try to target aggressive coyotes and remove them from the area.” When it comes to coyotes, “relocation” is not an option. After the shooters missed the first time, the DOW is still head-hunting the pair that assaulted Amanda and Rufus.

But before you go out to buy a shotgun and a hunting license, keep reading.

Taking the life of a coyote that has already attacked a human is insurance against the same one attacking another person. But even though aggressive coyotes will be killed when they’re found, Churchill and the Division of Wildlife are quick to point out that killing them doesn’t solve the problem.

On the very same morning that Amanda and Rufus were attacked, back at the state Capitol Senator Joyce Foster was trying to pass her “Coyote Control bill” to ease the mounting fears of her neighbors. They’re afraid of their pets and children being attacked by a growing population of coyotes that scout their southeast Denver neighborhood.

Indeed, coyotes are a community issue, says Churchill. And people have unintentionally encouraged coyotes to get comfortable in the places we now live. We’re half of the problem.

Dog food, trash, and even bird feeders attract wildlife, like coyotes, to rural neighborhoods. When coyotes live in close proximity to humans without the threat of being hunted, they’re less timid.

“If you see a coyote, even if they aren’t doing anything wrong, yell and scream, throw sticks and rocks at them,” Churchill advises. “Make them feel uncomfortable. I’m not encouraging people to harm them, but they need to be scared of people again.”

Coyotes are in the same genus–Canis–as dogs and red wolves. Canis latrans is a coyote. Canis rufus is a red wolf. Canis familiaris is a dog. Generally speaking, the only difference between Rufus, the dog, and the coyote that attacked Amanda is an understanding. A relationship.

Over time, Amanda and Rufus have learned to trust each other. They know each other. If we want to avoid being attacked by coyotes, understanding them and ourselves is the solution.

What happens when we don’t understand, when we refuse to coexist, is frightening.

The Coyote Project, an organization working to decrease human-coyote conflicts through education, lists some valuable guidelines about living in coyote country, including what to do if you see a coyote.

It’s the kind of advice that’ll make you rest easier. Maybe even throughout the night.