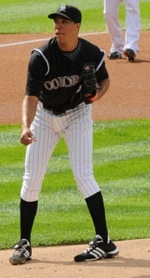 The Colorado Rockies wrapped their best-ever regular season yesterday, losing to the Los Angeles Dodgers, and finishing with a record of 92-70. The game felt more like a March game than an early-October game, writes Purple Row, with a mix of regulars and “scrubs” playing it out.

The Rockies entered the weekend with a chance to clinch their first-ever National League West division title but needed a sweep of the Dodgers to do it—about as likely as Nancy Pelosi and Glenn Beck making nice on Fox News.

But while the division win would have been nice and could have given the Rockies home-field advantage through the playoffs, the Rockies are guaranteed a playoff spot and will face the Philadelphia Phillies in a best-of-five-game series starting Wednesday.

Pitcher Ubaldo Jimenez (pictured) will start the first game of the playoffs for the Rox, signaling that he is the team’s ace of the future, writes Hall of Fame baseball reporter Tracy Ringolsby. Jimenez finished the season with a 15-12 record and a 3.47 ERA, the lowest in franchise history for a starting pitcher.

Aaron Cook will get the start in game two, but a major question mark hovers around the right groin of pitcher Jorge De La Rosa, the team’s winningest pitcher this season. De La Rosa tweaked the sensitive muscle during Saturday’s loss to the Dodgers, and it’s unclear whether he’ll even make the playoff roster.

“It’s not that bad,” he tells Ringolsby. “I will be ready. This is my first postseason. I will be able to pitch.”