Denver earns its “cow town” moniker each January when the National Western Stock Show (NWSS) returns. We put a steer, which can weigh more than 1,300 pounds, in the Brown Palace Hotel and Spa. We shut down 17th Avenue for a parade of horses and cows. And we flock to the 16-day show, which drew more than 700,000 visitors in 2019, to help carry on the tradition.

And what a tradition it is. The NWSS started in 1906 in the very spot where it still auctions off cattle, sells Western wares, and hosts rodeos. Last January, it was business as usual when I stopped by the show. Sitting in the Stadium Arena stands, I listened to a veritable master class in raising bovines as handlers dressed up in crisply pressed snap shirts and cowboy hats paraded around some of the world’s finest animals. But it was the setting—the arena itself—that seemed out-of-date with its flaking paint and faded brilliance.

Honestly, though, the Stock Show has lacked some of its old luster a while. So much so, that for years there were rumblings that the event wanted to move on, maybe even out of Denver. In 2011, former NWSS CEO Pat Grant spoke to 5280 about the conundrum. “There has been a lot of speculation about our future,” Grant said at the time. “We are finding ourselves seriously constrained and limited at our site.” He went on to talk about pressures from what would become the Central 70 Project, light rail expansion, and annual maintenance. “If we want to be a competitive, viable institution into the next century, I think we’ve got to make some significant and serious changes. The status quo is not an option.”

When the murmurs turned to full-blown headlines about the NWSS leaving town, Denverites came up with a plan—and the funding—to make sure that the show would go on. And it’s happening now.

It was certainly a possibility. Bound by seemingly immovable objects (I-70, railroad tracks, and the South Platte River), the NWSS had shrunk over the decades. Buildings and stockyards that had once been used year-round were often vacant or left unutilized, and aging facilities were expensive to maintain. Paul Andrews, NWSS president and CEO, says that two factors kept the show in the Mile High City: Mayor Michael Hancock and the citizens of Denver. Hancock, in particular, became a champion for keeping the show exactly where it has always been. The topic had broad support throughout the city and, in 2015, voters passed “2C,” which extended a lodger’s tax on hotel rooms and rental cars, to fund a portion of the project. That same year, Denver released a master plan to guide the project and the state legislature set aside $200 million for Colorado State University to establish new buildings at the site. Put together, the funding would cover much of phases one and two, but not the rest of the project.

What is the plan?

The idea is to turn the area, which will be called National Western Center (NWC), into a year-round destination for agricultural events, education, research, concerts, and more. It is a massive infill project that will grow the Stock Show area from 90 to 250 acres. (For comparison, Coors Field’s site is 76 acres and Empower Field at Mile High, including the parking lots, is 89 acres.)

The area will be home to the same amenities as the current Stock Show (trade show, rodeo, and auctions), but will add new buildings and venues. There will be artwork and installations dedicated to the state’s agricultural history. New roads will provide additional entrances and exits to the site. (Side note: RTD’s North Metro Rail Line, which will have a NWC stop, is slated to open in 2020.) It will also redevelop the riverfront, which is essentially inaccessible now. And it will establish bridges to cross the river and connect the Globeville neighborhood to the site. If that feels like a big lift, it is. “There is nothing like this, not only in the United States, but in the world,” Andrews says.

I hope you like acronyms and similar-sounding names, because this gets confusing: The City and County of Denver owns the land and will own most of the buildings. The National Western Center Authority, a nonprofit, will oversee the National Western Center (referenced above and known as the NWC). The NWSS,  also known as the Western Stock Show Association, will run the January show and rodeo, the Denver County Fair (which it owns), and April’s Rodeo All-Star. The NWSS will also book equestrian and livestock events throughout the year at the NWC. Finally, the Colorado State University System will build three buildings—named Spur—at the NWC.

First, let’s get oriented. If you’ve visited the NWSS in the past, you’ve probably spent most of your time below the railroad tracks. This is where the current Events Center and Hall of Education are located and these are the old buildings you may have seen driving by on I-70. The grand plan—which has eight phases—is to develop the areas above the tracks and bordered by the South Plate River in phases one and two. The remaining stages will develop an area called the Triangle (more on that below). 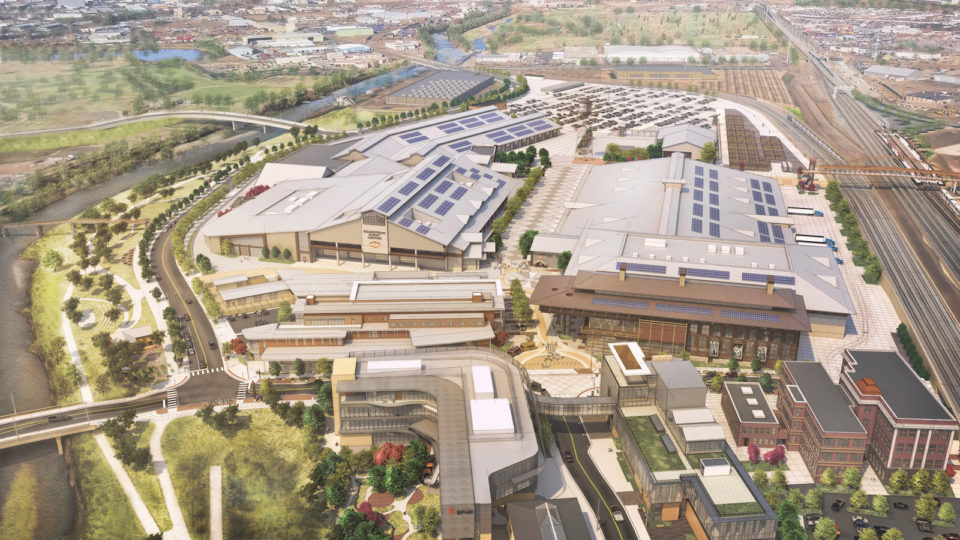 Unlike the current stockyards, the new pens will be movable to serve the Stock Show’s needs in the winter, but allow the area to transform into an open plaza or other configurations. The event center will house livestock auctions and other events throughout the year.

This building, which has barns and a stadium, will also host the NWSS’s trade show.

The Equestrian Center will “put us in the game for the largest equestrian events across the world,” Andrews says. “Today, I can’t even get in the hunt for some of those because our facilities can’t do what they need to do.”

One of the last pieces to be completed in the first two phases, the riverfront project will bury sewer lines and move railroad tracks to create a six-acre space along the waterway.

The show will go on

Rest assured that the NWSS will continue throughout the construction. Like a massive sliding puzzle, the Stock Show will move events as buildings go online and areas are updated. For example, demolition began on the stockyards in 2019, so about 40 percent of this year’s pens are temporary (and they’re still using old ones) while the new area is being finished. In that way, the Stock Show experience will be a little different each year until the NWC is complete.

Colorado State University System is constructing three buildings for learning and research at the NWC on a campus called Spur. The buildings—dedicated to water, health, and food—are slated to open in 2022 and will build on CSU’s long history with the NWSS (at one time, CSU would cancel classes so students could attend). “We’re building on three of the four corners that are going to be in the heart of the site,” says Amy Parsons, CSU System’s executive vice chancellor.

“When we set out to build our three buildings, we purposely hired three different teams because we wanted each one of them to design and build the buildings to be completely unique and speak to what is going to happen in these buildings,” Parsons says. The water building, which will be close to the South Platte River, will house water scientists and the Western Water Policy Institute.

This building, which will center on animal and human health, will host a veterinary clinic and more.

With a focus on the future of food and how to feed the world’s population, this building will have educational programming, green houses, and a soil-testing laboratory.

When will it all be done?

That’s also complicated. Phases one and two are slated for completion in 2024—if everything goes according to plan. And, as anyone who’s tackled a home renovation project can guess, completion dates on projects of this magnitude can be delayed. But that’s just the start of the construction. Phases three to eight, the effort to build out an area known as the Triangle, will take a bit longer.

What is the Triangle?

Plans for the Triangle—an area where many of the current NWSS activities occur that sits below the railroad tracks and extends to Brighton Boulevard—are still being formulated. The project is a “P3,” a public-private partnership, meaning that the city is looking for partner to help finance and develop the site. P3s have come under scrutiny after Denver International Airport fired its private partner on the Great Hall project last year. (In contrast, Union Station’s redevelopment was also a P3.)

A draft request for proposals was released in December, and two proposers are working on ideas. If the timing holds, the final plan would go to Denver City Council for approval in 2021 and construction would begin that year. The RFP establishes a few requirements, including renovation of the 1909 Stadium Arena and a new rodeo arena. Until that final arena is built, the NWSS will be incomplete. “The campus only works if all of this is done,” Andrews says. “We’re missing key pieces to make the Stock Show successful.” The Triangle could be finished in 2025.

So, this area will be under construction until 2025?

At least. Residents in the Globeville or Elyria Swansea neighborhoods will deal with near-constant construction, and that’s on top of the massive Central 70 Project, which is burying part of I-70 near the NWC.  The city and its partners have reached out to the community regularly for feedback and input, and efforts to hire locally are underway. After the construction equipment rolls out, though, the impact of the NWC on the surrounding residents will remain to be seen.