Mushroom season in Colorado begins in early April in the Front Range and extends through October, depending on the weather and elevation. Compared to other cultivated or farmed mushroom varieties, morels are typically quite elusive and are mainly found via foraging in the wild. This makes cultivated morels a rarer find at local farmers’ markets and grocery stores. But some intrepid growers are cultivating morels, with the hopes of making them even easier to find.

We spoke with Gary Heferle, co-owner of four-year-old Fresh From the Farm Fungi, who is passionate about using his in-depth mushroom know-how to undertake the challenging task of rearing morels in his own backyard in Littleton.

What Makes Morels So Unique (And Delicious)

Though indoor lab-cultivated varieties of mushrooms such as oyster and lion’s mane are the bread and butter of Fresh From the Farm Fungi’s business, Heferle became interested in farming more seasonally dependent wild mushrooms like morels after an experience foraging mushrooms with the Colorado Mycological Society.

Growing morels requires very specific soil and ambient temperatures, as well as moisture. Currently, Heferle is on his fourth rendition of his outdoor morel patch—which is about four feet wide by eight feet long—and considers it still in its experimental phase.

Heferle laid out the mycelium (the vegetative root system of the fungi, from which mushrooms grow) for his morel patch this past fall. He uses timers and sensors to track soil temperature and moisture to re-create conditions found in nature.

“Over the winter, it freezes, and this triggers the mycelium to harden off into bodies called sclerotia. They look like little truffles,” Heferle says. “And then in the springtime once the ground thaws again, the sclerotia has all the energy and that’s where the fruiting bodies will develop from.”

When soil temperatures begin to rise in the spring, the fruiting bodies of the morels develop and push their way to the surface of the soil. These growing conditions result in morels’ characteristically sponge-like appearance and unique honeycomb structure. The hollow fruiting bodies are also what gives morels their hearty texture and earthy, umami flavor that is highly desired and sought after by chefs and mushroom lovers alike.

For this reason, morels make excellent additions to hearty pasta dishes, including tomato or cream sauces, or as a side to accompany beef or potatoes. It is important to fully cook your morels (and most wild mushrooms) prior to giving them a taste. Heferle’s favorite way to cook morels is to sauté them in a pan with butter or fry them until they are crispy, and top them with salt, pepper, and green onion, or even a balsamic glaze.

Heferle describes his mushroom-cultivation journey as a weird hobby that turned into a business, and first made the connection to growing mushrooms due to his background in medical laboratory science and clinical mycology.

“I had experience with the petri dish cultures and maintaining the sterility of the cultures, which is probably the most important part of farming mushrooms: keeping the cultures healthy,” Heferle says.

In 2013, he started growing gourmet mushrooms in his basement with lab equipment and mushroom grow kits. Five years later, as interest in his fungi grew, he left his job at a microbiology lab, and he and his wife, Addie, founded Fresh From the Farm Fungi. Heferle still grows the mushrooms out of his home in a dedicated indoor cultivated mushroom lab and makes space in the backyard for trials with the seasonal morel patch.

Like the mushrooms, business continues to grow. Last fall the Heferles purchased a property in Sedalia, and are building out 1,500 square feet of mushroom growth space. The couple hopes to scale production in order to offer more mushrooms and varieties. Heferle has cultivated over 28 mushroom varieties with optimal flavor and textural properties. Some of his favorite varieties of lab-cultivated mushrooms are hearty lion’s mane and pink oyster mushrooms (known for their seafood-like flavor).

Heferle is not only passionate about fungi, but also loves to share his experience and knowledge. He documented his journey with Fresh From the Farm Fungi in his ebook titled Growing Gourmet Mushrooms for Market, which was published last month.

“I believe that if it can happen in nature, it can be re-created in the lab or in a controlled setting,” he says.

How to Hunt for Morels in the Wild 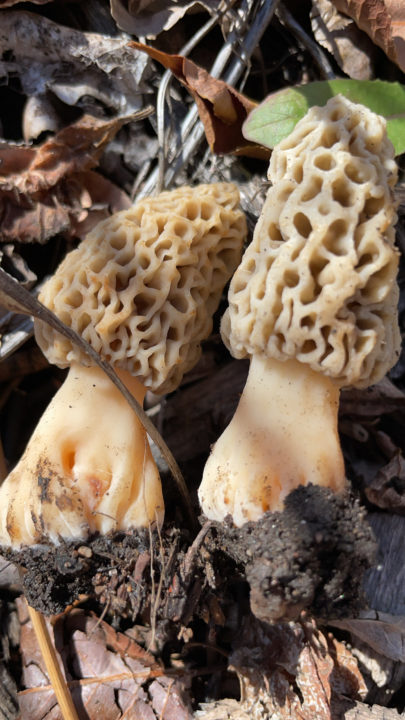 Morels are commonly spotted under cottonwood trees in riparian regions (forested areas adjacent to rivers and streams) in the Front Range. They are often associated with the root systems of old growth trees with lots of damage due to their key role in eating decaying wood of the tree.

Because morels are spring fungi, where they are found depends on the elevation, temperature, and rainfall patterns for the season. “Colorado is very unique because from May until October it’s mushroom season,” Heferle says “You can chase the elevation as the summer warms.”

There are many varieties of morels, including black, yellow, and burn morels (which look blackened). There can also be false morels, look-alikes, or a breadth of other varieties of mushrooms that could be poisonous.

While mushroom hunting can be satisfying and fun, it is important to do your homework prior to harvesting fungi in the wild. Hunting morels, or any other wild mushroom varieties requires education, guidance, and local permits to harvest wild mushrooms by the U.S. Forest  Service.

“If you are going out for your first time to forage morels, I recommend going with the Colorado Mycological Society or with someone who’s experienced,” Heferle says. “You’ll be more confident with identifying and being able to pick them.”

You can also learn more by buying a guidebook like the National Audubon Society Field Guide to North American Mushrooms by Gary Lincoff; downloading mushroom foraging apps; taking a class or foray with Forage Colorado; or attending the annual Telluride Mushroom Festival (August 17–21, 2022).

[Read A Guide to Hunting for Edible Mushrooms in Colorado]

Where to Buy Morel Mushrooms

While shroom hunting is a very specialized hobby, elusive morels can be found via local growers like Fresh From the Farm Fungi, and also can be found dried or frozen year-round.

Heferle’s cultivated mushrooms can be found in the spring and summer at the Cherry Creek Farmers Market, the Co-op at 1st grocery store, and via the Grow Girl Organics CSA in Arvada.