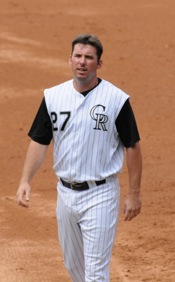 For a close-up glimpse at declining sports momentum, look no further than the Colorado Rockies, a team that’s dropped four straight games, including last night’s 10-2 embarrassment against the San Francisco Giants.

The Rockies have given up 19 runs in the last two games in San Francisco and scored only three runs, which makes it hard to win.

MLB.com points out various ways in which the Giants have momentum on their side heading into today’s final game in a three-game series and have closed the National League wild-card gap to just two-and-a-half games.

Things have gotten so rough lately it may make fans “question their faith,” writes The Denver Post’s Troy Renck. It’s hard to disagree with him, considering these facts: The Rockies have struck out 54 times in the past five games, and eight of pitcher Ubaldo Jimenez’s first 11 pitches were balls last night.

He threw 37 pitches in the first inning, which makes it hard to stay on the mound for any extended period of time. He loaded the bases with one out and could have slithered out of the jam when an easy double-play ball was hit to third baseman Garret Atkins (pictured). The ball bounced off his glove, and the game was basically over in the first inning.

Yes, the Rockies have lost their mojo. Several players have been missing, most notably all-star outfielder Brad Hawpe, who’s hitting just 9-47 with runners in scoring position, according to CBS Sports. Let’s see what happens tonight, but the prognosis is not good.