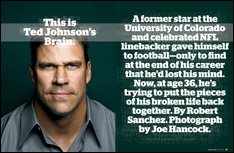 The impacts of repeated concussions suffered by NFL players is on the national stage, with the U.S. House Judiciary Committee holding a hearing on football brain injuries today.

The mental decline isn’t anything new, but it sure has been getting a lot of press lately.

5280’s Robert Sanchez profiled former University of Colorado football player Ted Johnson in August, telling the tale of a college star with a solid pro career whose multiple concussions ripped his life apart. The problem for players like Johnson is the NFL has by and large dismissed the issue, insisting there isn’t much proof football leads to increased mental illness.

The New York Times reports the NFL’s committee on concussions will issue a long-term study analyzing the issue in the coming years, but many epidemiology and neurology experts doubt the veracity and independence of the league’s study.

The Times points out that if the league’s study is allowed to become the definitive analysis, the public will not realize the seriousness of the issue, which is troubling in light of the million children who play high school football across the country.

Deadspin notes that many experts are calling the NFL’s study “a load of bunk,” writing that the scientific method behind the study is dubious and the league’s main researcher is the leading voice in discrediting the outside evidence supporting a connection between football and brain injuries. Deadspin also points out that half the doctors working on the study are employed by the NFL.