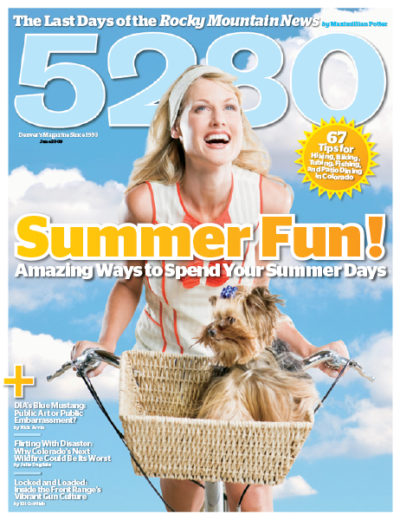 One unfortunate heartbreak led to the largest fire in Colorado history. On June 8, 2002, former U.S. Forest Service ranger Terry Barton burned a letter from her estranged husband in a fire pit west of Colorado Springs near Lake George. Distracted by her emotional duress, she claimed, Barton failed to properly extinguish it, and drought and high winds pushed the ashy remnants into flames that reached beyond her control. The ensuing Hayman Fire wasn’t fully doused until July 18, nearly 140,000 acres later. Barton served six years in prison for starting the fire, which burned 132 homes and 466 outbuildings, prompted more than 8,000 evacuations, and cost almost $240 million.

We asked Randy Hickenbottom, the district ranger for the South Platte Ranger District who arrived on the scene a day after Hayman started, for his take on a fire of this magnitude.

5280 Can you paint us a picture of the scene?
Randy Hickenbottom I hadn’t ever seen anything that darkened the sky like that. It looked stormlike even though there was no storm in the forecast. There were elements of red, orange, and yellow with black and gray—very eerie looking. Fires that big can look like a huge wall of flames—two or three hundred feet high—and sound like a train, an enormously loud pulsing, chugging sound that’s just weird. It’s so intense that your nasal passages, your sense of smell, shut down, but there’s still an acrid odor that stings. Your handkerchief can be your best friend.

5280 Were you initially nervous about the fire’s scope?
RH That second day it burned 19 miles, and the weather report called for similar conditions on the third day. Another 19 miles would have put it approximately in downtown Evergreen—where I lived at the time. So I called my wife and told her to think about what she might take with her. Fortunately, it did not continue like we predicted. But after the third or fourth day, we knew we were dealing with something unprecedented in Colorado history. We had to drive two hours from one end of it to the other.

5280 What goes through your mind when you’re that close to something so volatile?
RH When you’ve gone from initial attack to something that’s escaped, the situation changes. You’re no longer trying to solely suppress the fire. The focus becomes how you’re going to get people out of harm’s way, and the complexity changes dramatically. In a fire that’s moved through thousands of acres, you’re looking at multiple jurisdictions, political identities, and ranger districts. You transition from worrying about the fire to worrying about people’s safety. You’re wondering how much lead-time you need to provide, what’s the next trigger point for evacuation? The homes can be rebuilt; people dying—they can’t be rebuilt.

Some think setting controlled blazes is a reliable and legitimate land management practice; others believe it’s too risky. Both sides weigh in.

On an unseasonably warm day in mid-March, the sky above U.S. 40 between Fraser and Winter Park is gray and hazy. Flanking the road in the fields and woods, half a dozen thick plumes of smoke rise rather alarmingly from the brush. But these aren’t necessarily cause for concern; most likely, they’re controlled burns.

Colorado’s firefighters bring 98 percent of wildfires under control before they span 10 acres. Our continuous suppression of naturally occurring wildfire, however, actually thwarts a healthy ecological cycle and builds up ground fuel such as fallen trees and needles. Fire officials use prescribed, or controlled, burns to consume as much fuel as possible and minimize the likelihood of a cataclysmic incident. Not everyone agrees with the strategy, because even a controlled burn can run amok—especially in Colorado’s exceedingly dry, unpredictable climate. The two schools of thought:

Expert Accountability Fire pros initiate monitored and regulated burning based on the most ideal weather and wind conditions.

Fuel Reduction Lodgepole pines naturally burn every 80 to 100 years; most of Colorado’s mature lodgepole forests are overdue to burn because of constant fire suppression, and beetle-kill deadwood is exacerbating the risk to potentially catastrophic levels.

A Record of Success Officials prescribe hundreds of burns every year that rarely blow out of control.

Unpredictable Conditions Even meticulous planning doesn’t always trump the unexpected weather and wind that can rapidly inflate a fire’s scope.

Eco-Damage Fires of any kind can contaminate water sources, destroy habitats, release carbon, and stress vegetation that serves as feed for ranch animals.

Potential Loss The chances may be small, but a single escaped blaze can cause tragedy and millions of dollars in damage. Exhibit A: the Los Alamos fires in New Mexico, where hundreds of homes burned in 2000 after the National Park Service set a series of controlled burns that they couldn’t contain.

Undecided. “Fire is a controversial topic, whether it’s prescribed or wild,” says Steve Segin of the U.S. Forest Service, Rocky Mountain Region. “We’ve got a fire-adapted ecosystem, and if controlled burning is used with science and policies, and the procedures are followed, it can be very effective. But over the last five years, our tactics have changed, largely because of the number of people moving into urban interface,” where homes meet forest.

So You Think You’re a Hotshot?

Three of Colorado’s finest wildland firefighters, in their own words.

When the flames rage beyond the capabilities of local units, they set off a byzantine, zealously followed communications process that summons firefighting’s elite: aka, the hotshots. The 20-person Interagency Hotshot Crews—Colorado has five of the 105 crews nationwide—are deployed anywhere wildland blazes have the highest priority. Extensive and rigorous training ensures that they are strong enough—mentally and physically—to endure the harshest conditions for days at a time without relief. With up to 45 pounds of gear per person, the crews attack each fire with a carefully devised strategy, often hiking miles of perilous, smoky terrain, digging endless trenches, and clearing acres of ground fuel from the fire’s path. The labor is intense and exhausting, and seasonal hotshots—those on crews for six or eight months a year—don’t even get government health insurance. But year after year, they return to battle the blazes. Here’s why.

As a supervisor, I’m thinking about how I’m going to get 20 guys home safe and complete the task. It comes down to how I’m going to make it home to see my son and my wife. You’re married to the crew as well as to your significant other. You have two families, and you have to weigh the options. Right now the crew is important and I’ve got to take care of them; other times, the family comes first. Some people may look at it as crazy, but we’re public servants—not necessarily thrill seekers or adrenaline junkies. It’s a job, there are risks associated with it, and we have a specialty skill set: putting out fires and protecting life, property, and resources.

I was on a crew helping out in Arizona in 2004 when four guys were hit by lightning. Those are impacts you can’t plan for—even the weather service didn’t expect lightning in that area. We’ve had more close calls with the environment than with fires. You never know when a tree is going to fall or a rock the size of a Volkswagen comes down at 40 mph toward a group of guys. To plan for that, you need situational awareness—a 360-degree approach to the hazards. We plan for the worst; we don’t hope for the best.

We learn from past mistakes and try to be students of fire, always building on experience and making a mental “slide show” to just pull up and recognize certain things—weather conditions, fuel types, fire behavior—so you can adapt and react to your current situation.

In San Bernardino [California] in 2006, they lost five folks on the Esperanza Fire. Our crew got called in after the tragedy. Going to a week’s worth of funerals and memorials made an impression that won’t go away anytime soon.

It’s the hardest job I probably ever will have as far as being physically and mentally challenged and staying sharp and positive. You’re worn out, fatigued, away from home in close quarters, and living, eating, and sleeping with 20 other guys. It’s a crazy atmosphere, but it becomes the norm. It probably seems more dangerous and crazy to outsiders than it really is.

There are times when I think, “Wow, we’re really on the edge.” I can’t guarantee anyone’s safety, and rocks are rolling, trees are falling, planes are overhead. Digging line for miles and miles and miles, you wonder if you’re going to make it. There have been times when I’ve felt like my insides were going to fall out.

You work so hard and get so tired. But you [rely on] adrenaline. What drives us is a sense of personal satisfaction; when you can turn around and see your work, it’s something tangible we can all be proud of. A hotshot crew reminds me a lot of the military. I think it’s the family aspect that enables us to band together the same way.

For many of us, we’re driven by a fascination with a force of nature. Last year, we were on assignment, camped way up in the wilderness. The trees were full, and all of the sudden I looked up and it seemed like the trees were raining fire. It was incredibly beautiful, and seeing that made all those hours of pain and hard work worth it. It’s part of the natural world, which means there’s kind of a battle that you fight internally. I love trees…but there are too many of them in some places.

Having good home insurance is a must, but if you live in a high-risk fire area, these 10 tips could save your house.

2. Invest indual-pane windows and fire-resistant blinds, drapes, and other window treatments; the temperature of flames may be high enough to penetrate normal glass and burn the interior of the house.

3. Create further “defensible space” by clearing out fallen leaves, pine needles, and flammable plants within 30 feet of the home. Maintain shrubs and regularly mow and water the lawn.

4. Stack firewood piles at least 30 feet from the home, and clear gutters to prevent rapid spreading.

5. Remove limbs that come within six feet of the house, trim treetops to at least 15 feet from each other, and clear any low-hanging branches.

6. Turn on lights inside the house for increased visibility through thick smoke.

8. Connect a hose—stored in an easily accessible space with essentials like a ladder, shovel, and bucket—to outside spigots, and wet your roof and shrubs with lawn sprinklers.

9. Remove curtains and move patio furniture and interior furnishings to the center of rooms, away from windows and glass doors.

10. Be vigilant about checking the roof and attic for embers and smoke.