Two of our favorite words at 5280 are “bicycling” and “beer.” So when we heard that the Denver Beer Company (DBC) was teaming up with BikeDenver to concoct a new brew, we had to check it out. DBC owners Charlie Berger (on the bike) and Patrick Crawford demoed their swanky new bicycle-powered mill—invented by the creative, two-wheeled minds at Salvagetti Bike Shop—for us, but the public can take a ride this Saturday, April 7. Starting at noon at DBC, BikeDenver members will take turns pedaling and, in turn, grinding malted barley for the brand-new Incredible Pedal IPA. Tip: Anyone can join BikeDenver on the day of and start pedaling.

So when can you try the brew? Saturday, April 28. BikeDenver is hosting a spring ride at 11:30 a.m. in Wash Park, followed by a release party at DBC. The beer will be on tap at DBC and part of the proceeds will benefit BikeDenver’s efforts to promote bicycling in and around the city. Cheers to that! 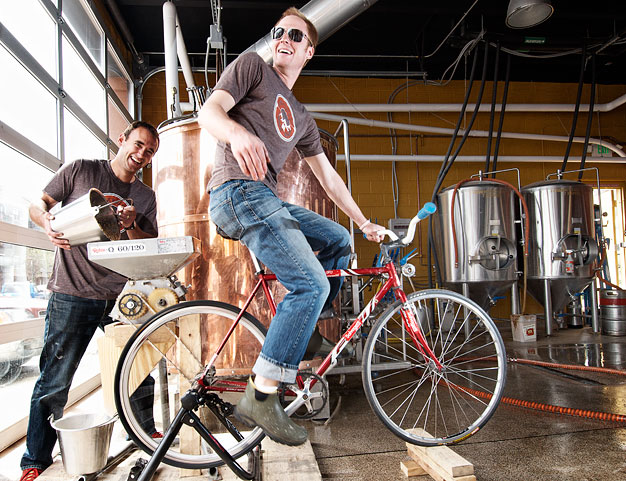