This is a Thompson/Center .50 caliber traditional muzzle-loader. It’s a gun my dad built from a kit. You load the gun from the muzzle, which was the traditional way of shooting before there were auto-loading mechanisms or even breechloaders. You’d have to pour your powder down the barrel and stuff a ball down the muzzle of the gun to be able to shoot it. It is the essence of shooting to me. You don’t just open a box of cartridges and stuff them into a magazine and shoot. You have to load the gun with every single component to shoot every time. I don’t know how old it is, honestly. I know that I really, really enjoy shooting it. It’s a grand old time. 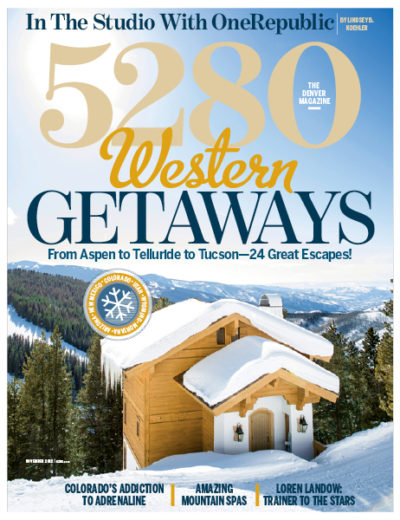 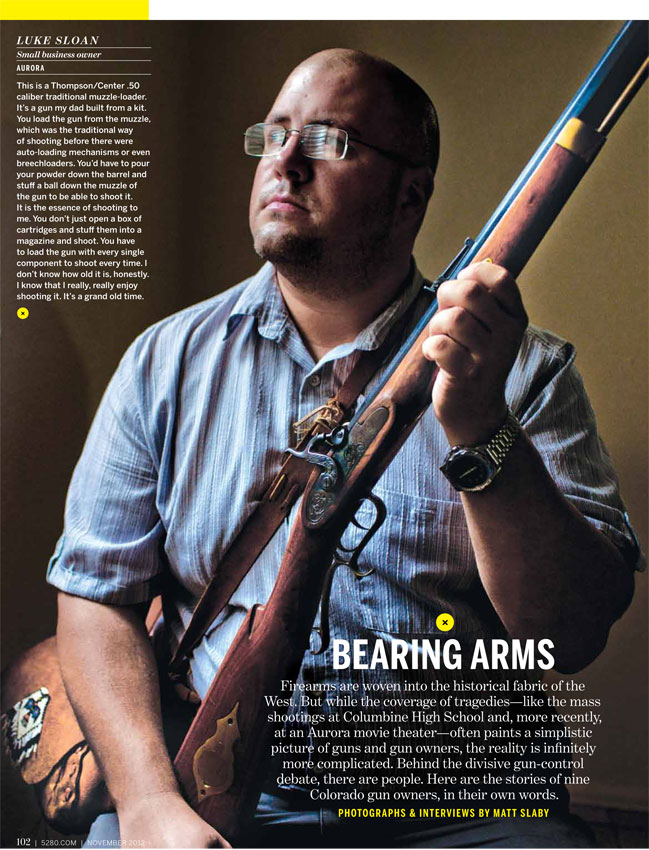 Martha Altman
Former employee at the Anschutz Medical Campus; plaintiff in the lawsuit that was brought against the University of Colorado Board of Regents in 2008
Broomfield

Guns are not in the forefront of my life. I have them, I’m comfortable with them. Guns allow me the choice of defending myself. I’m not always going to have someone around who will be able to protect me, and I have to do that myself. I was working at the Anschutz Medical Campus when the Colorado Supreme Court decision came down, and the first day it was legal to carry a gun, I drove on campus and I got out of my car with my weapon in my pocket. It was liberating. No one knows if I have it or not. My friends and family never ask. I may or may not have it, but people should just assume that I do. 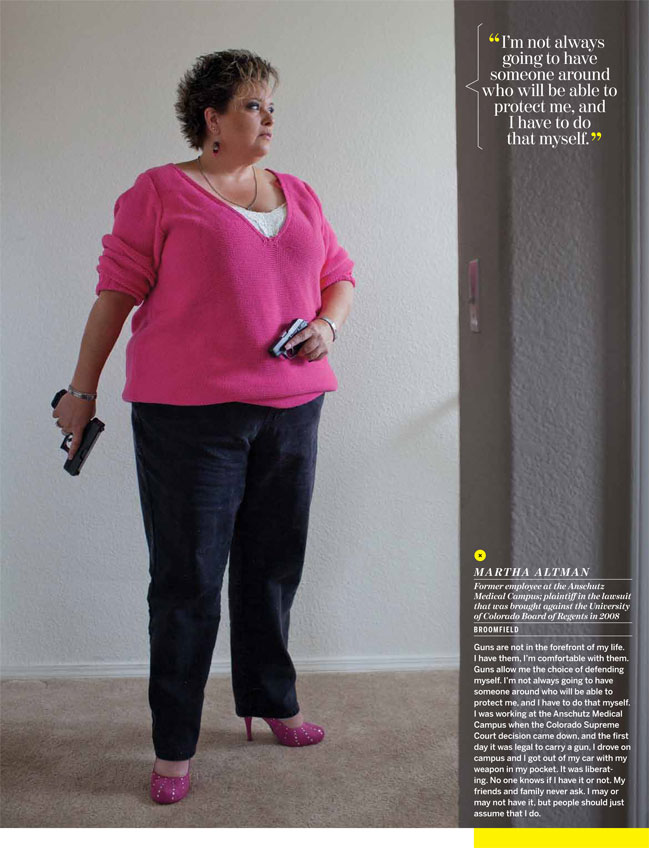 I don’t think everybody should own a gun. I’ve got a number of friends who are afraid of guns, and you do what you can to get them out of that mindset. They’re ignorant about it. They’re not stupid; they just don’t know. They’ve never been in a position to handle a gun. They’ve never been out to shoot a gun. I’d own a gun even if I wasn’t in the military, but about 75 percent of the military brethren who I hang out with don’t own guns, and don’t want to own guns. That’s their prerogative. They still like to go out and shoot; they just don’t want guns in the house. A lot of that comes from having kids, because most of them are married with children. And I understand. If you don’t like it, don’t buy it. 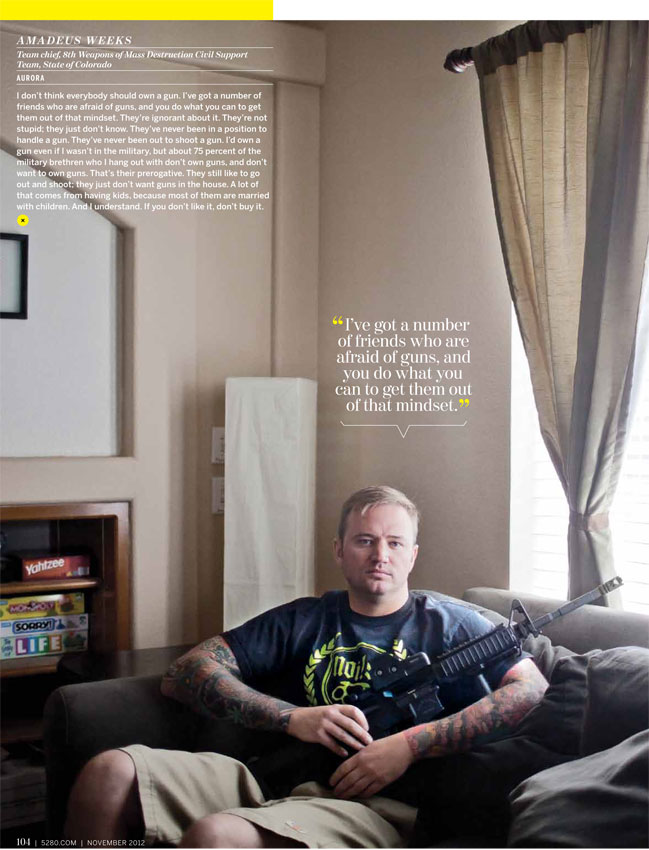 I have guns for hunting, for sport. If I knew that somebody in my family was in danger, I know that I could handle a gun. We have some handguns, and we’ve shot them on a range, and I could protect myself or my family, I suppose. But for me its pretty much the sport: the shotgun for the birds and the rifles for the big game. We have young grandchildren, but I’d like to teach them to hunt when they get older. I’d want them to know that if you want to do this, it’s not a game. It can be dangerous, so you have to do it correctly and everyone needs to go through the classes. I’d teach them how to handle the meat, how to be ethical. I don’t think that’s a bad thing. There are a lot of kids who don’t even know where a steak at the grocery store actually came from. 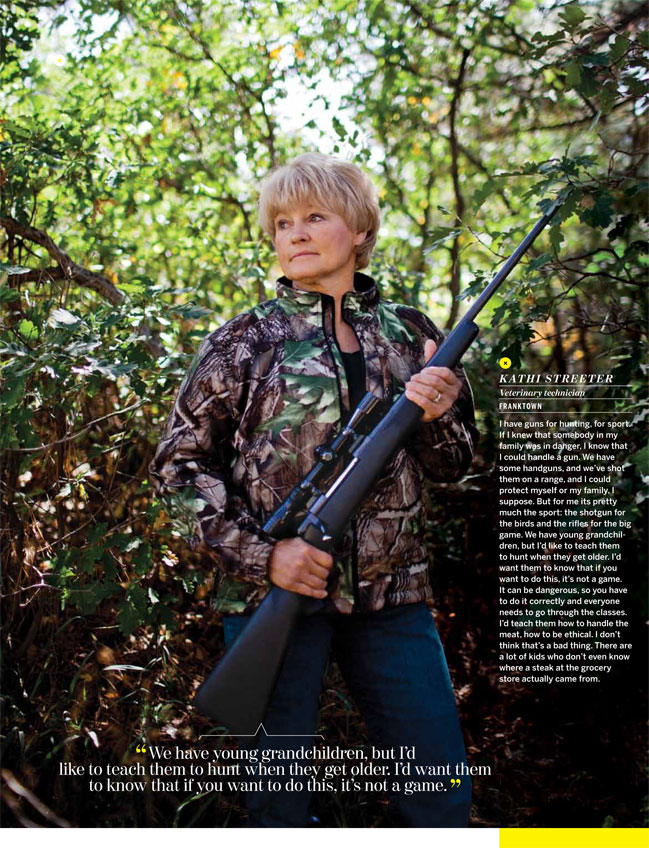 I’ve been interested in the gun industry and gun culture all my life, but the opportunity to go on television with guns was an opportunity for my family and me to put guns forward in a positive light. Far more lives are saved by the use of firearms than have ever been taken by somebody who used a firearm inappropriately. I think the root of the fear is a lack of knowledge. If people knew more about guns, then they wouldn’t be afraid. Some people are actually afraid that a gun will just go off and kill them. And that fear is just as reasonable as being afraid one of your cars is going to start up and run you over when you walk into your garage. It’s not possible. I can load up this Winchester lever-action rifle, set it down on the counter, and if nobody ever touched it, no one would have ever been hurt. Guns are a positive thing for America. This country needs to get back to its roots. We started out with guns; we’re gonna end with guns. 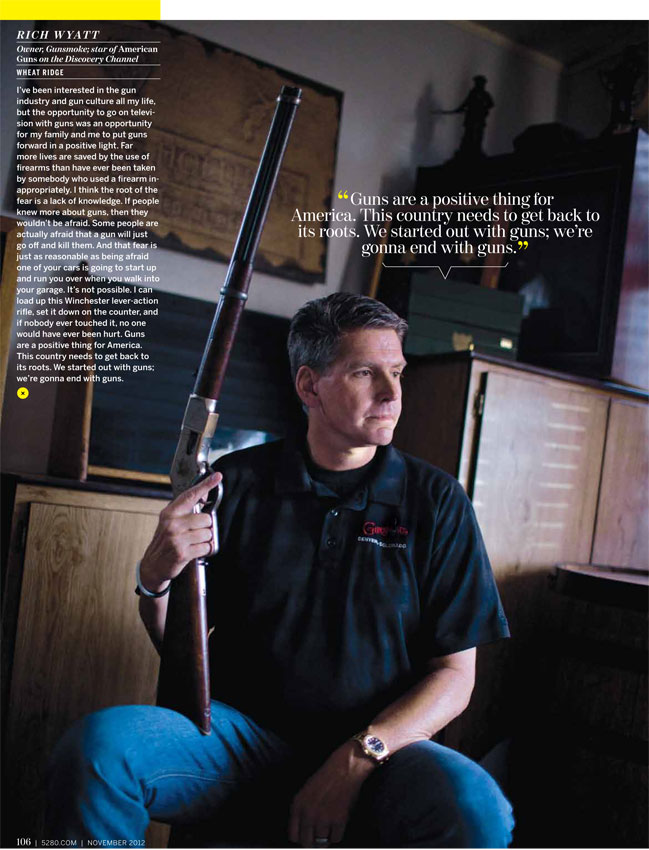 I’m a Civil War and Indian Wars re-enactor and have been doing that for about the past 13 years all throughout the United States. My interest in guns started pretty much at the beginning of my re-enactment career. We use blanks on our horses, but I eventually graduated to live ammunition. I was mostly interested in the historical aspects of guns. But I realized I wanted to become accurate and see if I could hit anything using live ammo, because you have no idea shooting blanks. So I purchased some modern pistols, and we’d go to shooting courses, either outdoor or indoor, and it was fun. It was something I found other ladies enjoyed. We’d go shooting and then go and get a manicure and then maybe a latte. It’s something that really can be a part of your life. 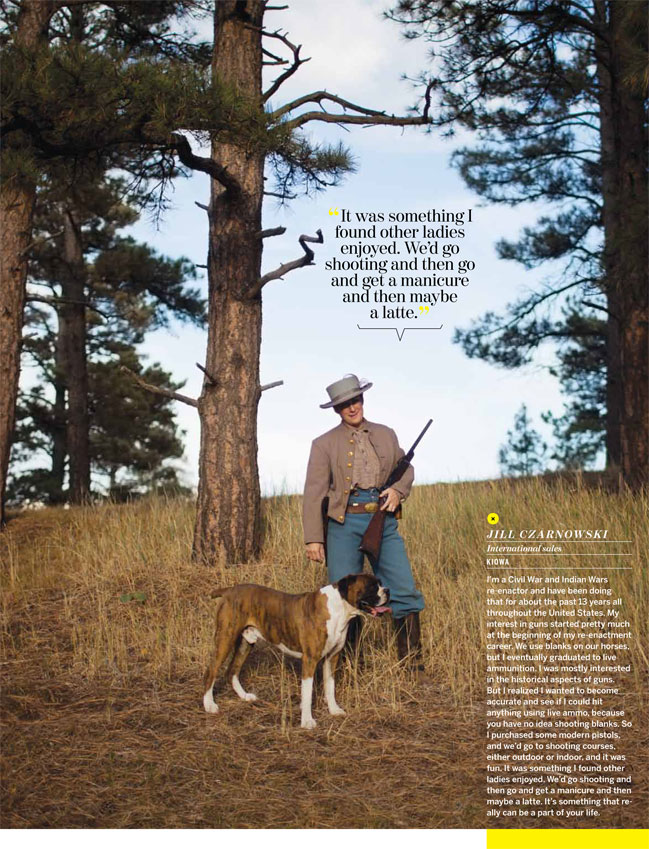 I represent a group of students called Students for Concealed Carry that sued the University of Colorado to overturn the university’s ban on licensed concealed carry on campus. That case started in 2008 and finally finished at the Colorado Supreme Court in March 2012, which overturned CU’s ban. Licensed concealed carry is now recognized as a legally protected right at the University of Colorado as it’s been for the past decade at Colorado State University. Guns represent a choice, and that’s why I represent the students in the CU case. Guns are about the choice to fight back if your life is threatened. I think that is a corollary of individualism: You own your life and you have the right to defend it and the right to defend the people that you love. With the gun ban, CU was saying to students, “You are no longer individuals when you step onto this campus. You don’t have the right to defend yourself anymore.” And I think that’s wrong. When you take away gun rights, you take away a little bit of that individuality, a little bit of that independence. 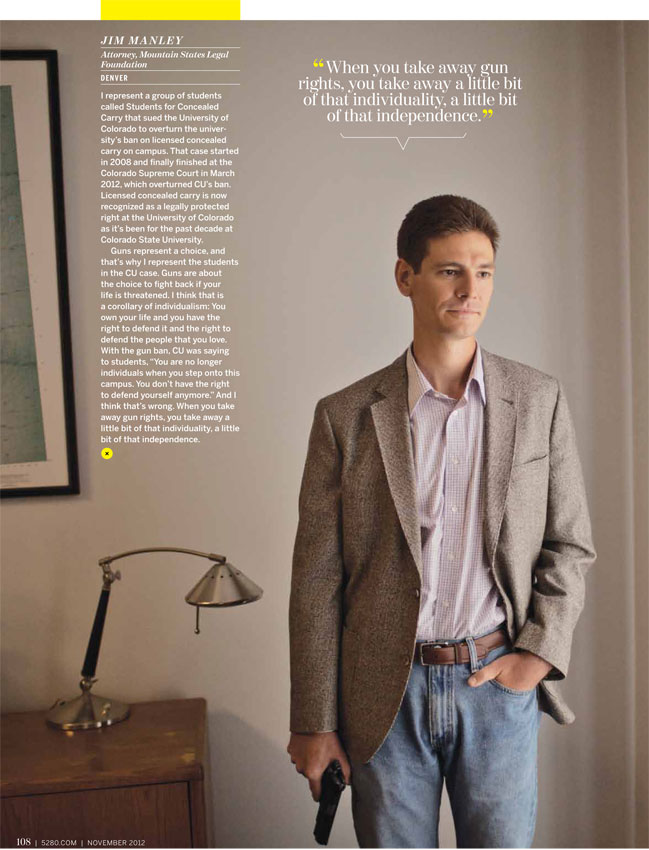 John: I own guns for my own personal protection and for fun and enjoyment. Dawn: We do Wild West shows, and we compete in Cowboy Mounted Shooting Association events. John: These are replicas of 1860 Colt models that were used in the old West. They are single-action revolvers: Every time you want to shoot, you need to cock the hammer and pull the trigger. Dawn: But, over everything else, guns to me mean protection. John: One night, I was lying in bed with Dawn, and I thought I heard our son, Justin, who was three at the time, fall out of bed. Then I heard the noise again, and I realized he didn’t fall out of bed twice. I grabbed my weapon and looked to our back door and saw a young man putting his shoulders into the door to break it down. I drew my weapon on him and got as close as I could safely and ordered him to the ground. He went to his knees and put his hands behind his head and I kept my distance. The whole time Dawn was on the phone with 911. We held him there till the police came and arrested him. Dawn: We live in suburbia, and you don’t expect that to happen at your back door. Out of all the places I would have thought I would have actually had to draw a weapon, I would have never thought that it would be in my home in Suburbia, Colorado. 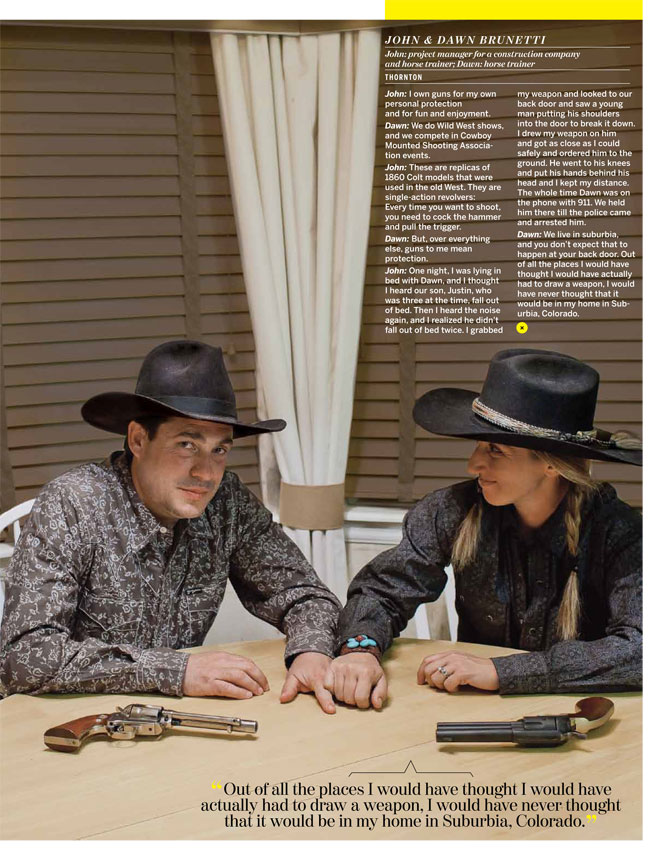