Architect Renée del Gaudio had fallen in love: In their search for a historic house in Denver, she and her husband, Ross Wehner, discovered a gorgeous Victorian in City Park West. Built in 1896, the home was a rare find—it was untouched by the late-20th-century spate of bad remodeling that stripped so many houses of their original materials and details.

“The house was fantastic, perfect, just what we wanted,” del Gaudio says today. And then she and Wehner saw the backyard: 2,400 square feet of concrete, with weeds pushing up through the cracks. The owner had planned to split the home into apartments, so he had turned the backyard into a parking lot for future tenants.
Del Gaudio and Wehner were undeterred. 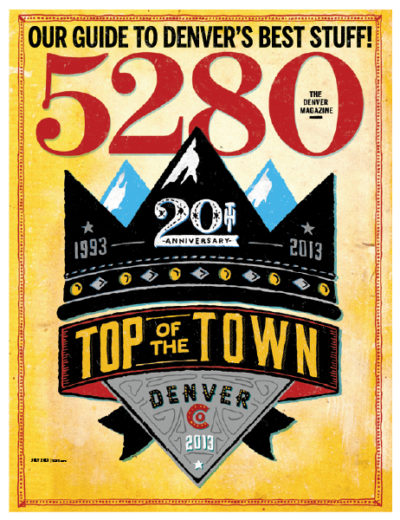 They bought the house, and del Gaudio set to work creating a design for the yard that would transform it into a modern, casual sanctuary in the city—a place where the couple could entertain their friends and the kids could play outside. “In our hearts, we’re mountain people,” she says. “The idea of living in a dense urban neighborhood was a little daunting, but we knew that if we could have a naturally beautiful place to be outside, we’d be happy.”

From the start, the pair knew they’d do the work themselves—with help from their family and friends. “I designed it so carefully that I wanted to execute it myself,” del Gaudio says. “It wasn’t anything we couldn’t do.” Wehner even removed all the concrete.

The pair spent two summers constructing the yard. The first year, they tackled the architectural elements: Layered decks made of ipe wood extend from the back of the house toward a dining area that is paved with bricks from the home’s original construction, which the couple found stacked in the basement. Del Gaudio laid the brick in the weeks leading up to the birth of their first child. “It’s meditative work,” she says. “It was a good job for a pregnant woman.” (We’ll have to take her word for it.)

Meanwhile, Wehner’s mother, a mason, built a brick-and-mortar cooking grill along the yard’s south wall, which gets shade in the afternoon. Denver furniture-maker Ethan Hutchinson, a friend, built the garden’s two gates—one at the yard’s front entrance and the other at the alley—from vertical-grain fir and translucent acrylic. Del Gaudio designed them to pivot on a vertical steel tube hinge. “I love the way the sunlight radiates through them,” she says. “You get light and privacy.” A contractor built the garden foundation and wall—virtually the only hired help the couple enlisted.

The next summer, the owners added plants and trees. With help from del Gaudio’s father, they built a 40-foot raised planting bed, installed it along the sunny north wall, and filled it with strawberries, vegetables, and herbs. Maiden grass grows between the decks to soften the look, del Gaudio says. A series of columnar aspen along the alley acts as a privacy wall. A honey locust, with its long limbs, gives shade all summer, and a goldenrain tree stretches out over the deck and signals summer with its early-season yellow flowers.

The project’s only hiccup was a wading pool for the kids. “We imagined it as a place where you’d soak your feet, sitting beside the garden bed,” del Gaudio says. The couple didn’t get the drainage right, “so it ended up filling with nastiness.”Even pros have to improvise sometimes: In this case, the duo bagged the pool idea and turned the structure into a sandbox instead.

When the work was done, the backyard became the family’s go-to spot: playroom during the day, dining room in the evenings, party spot on special occasions. Friends who visited in the summer months traded the home’s non-air-conditioned rooms for tents they pitched in the yard.

From their vantage point, the guests might have admired the distinctive combination of the home’s 19th-century architecture and the yard’s modern vibe. Del Gaudio herself loves the contrast. “In architecture in general, a mix of old and new is always more interesting than going 100 percent in either direction,” she says. “The contrast tells the house’s story. It shows that a modern family lives in this historic house. We feel like it’s our contribution to the home’s story”—one that delivers a very happy ending.