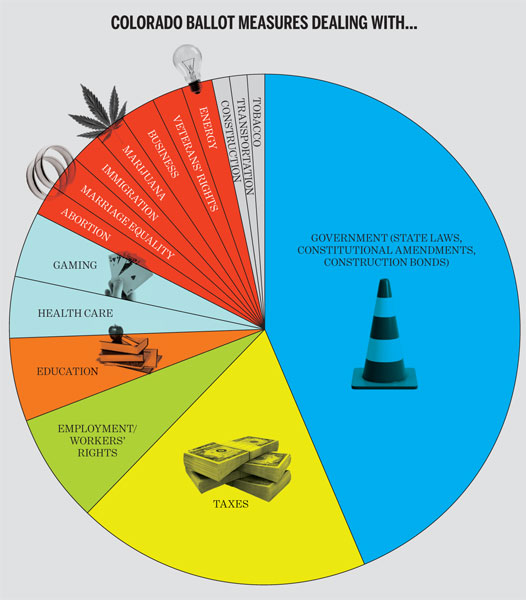 Voter’s Guide
The two referendum questions that (probably) won’t put you to sleep.
Initiative 22: Funding for Public Schools
This initiative would increase state income tax from 4.63 percent to 5 percent on the first $75,000 of taxable income (or $166.50 more per year for someone making $45,000) and to 5.9 percent on taxable income after that—adding an additional $950 million to the public education coffers. If the measure passes, it will also trigger a new formula for distributing state money to school districts—a model that hasn’t been changed since the early 1990s.

Proposition AA: Retail Marijuana Taxes
Last year, Coloradans passed Amendment 64, which legalized the sale and possession of small quantities of marijuana. This year, voters will determine how to tax it. Proposition AA imposes two new taxes on recreational weed—a 15 percent excise tax on wholesale prices and a 10 percent sales tax on retail transactions—and allows the Legislature to adjust the sales tax rate up
to 15 percent.