When Sushi Den opened in Platt Park on December 24, 1984, Stapleton was still an airport; Ronald Reagan had just been re-elected president; and the Soviet Union had recently boycotted the Summer Olympic Games in Los Angeles. That week, the Rocky Mountain News reviewed the cheese pizza at Edgewater Inn, and the Denver Post criticized the nachos supreme at Ichabod’s. Clearly, much has changed about Denver’s food culture in the past 30 years. Few restaurants exemplify this shift more than the new location of Izakaya Den—which brothers Toshi and Yasu Kizaki opened last June adjacent to Sushi Den, their stalwart sushi temple. 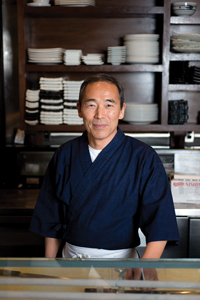 Recent meals at Izakaya Den revealed that it’s still possible to spot a woman using rubber chopstick helpers or a man who valets his Ferrari but can’t pronounce the Italian risotto balls named “arancine.” But the exquisitely designed restaurant is also flooded with diners of a more modern era. On one visit, standing in the entryway, alongside imported columns of silk butterflies, was a Japanese duo who had come for the snacklike fare typical of izakayas across the Pacific. Seated near red lacquered ceiling cubes holding 72-liter sake barrels (“izakaya” loosely translates to “sake shop to stay”) was a young accountant who drilled his server on whether the short ribs were seared or braised. Beneath the tranquil water-garden stairway that connects street-level dining rooms to a stunning upper level sat a Gen X West Coast transplant who mused that his “mezashi” (a pair of dried and charred sardines) reminded him of eating simply grilled fish with his great uncle, a commercial angler. Upstairs, not far from a retractable glass roof and a cluster of spherical chandeliers made of bent bamboo plywood, was a graying woman who surmised that the white pellets atop her grilled squid sumiso were millet. In fact, they were “arare” (a Japanese rice cracker), but it was an impressive guess that sounded more 2014 than 1984.

Over the course of many visits to Izakaya Den, my first set of questions and observations often began with the restaurant’s sake list. The definitive fermented rice sipper is no afterthought: Chef-owner Toshi’s comprehensive selection includes more than 30 offerings. The dry to sweet flavor profile of each bottle is clearly indicated on his list; and there is an encyclopedic collection of production styles, including “daiginjo” (a splurge that costs up to $128 a bottle here). Sake is poured into stemless glasses or time-honored wooden boxes without the slightest pretense. One evening a knowledgeable bartender was eager to answer my many inquiries and generously offered four different tastes.

On a happy hour stop, Izakaya Den’s house cocktails were equally intriguing, as was the dialogue that came with them. While mixing a martini of pear vodka, ginger liqueur, and fresh sage, the bartender told me that “ikanago” was a classic bar snack of miniature sand lance (sand eels). He went on to say that the Japanese like such chewy foods because they produce saliva, which aids digestion.

Whether it’s sake or cocktails that start your meal, diners will quickly realize that Izakaya Den—like its predecessor across the street—offers a collection of food menus: a tickable list of seasonal sushi and house rolls; cooked small plates; and a menu of global classics prepared through a Japanese lens. That bartender’s bowl of bite-size sand lance was just one of many dishes from the traditional izakaya menu that I’ll go back for. I’ll also order a slab of tempura “anago” (salt-water eel) again. It was so wide and plump that my companion and I asked if they accidentally sent us the wrong fish. (Yasu later told me that this eel from his home island of Kyushu is technically called “o-anago,” for “giant eel.”) And then there was the Kobe beef kinpura—a mélange of tender strips of beef, julienned carrot and burdock root, sesame seeds, and togarashi chile—which I find myself wishing was my everyday dinner bowl at home. I also loved the sushi bar’s “kaibashira”: a roe-topped, nori-wrapped bite of creamy, diced fresh scallop.

I was equally excited about Izakaya Den’s more global offerings. Seeing the words “kimchi,” “menudo,” “sofrito,” and “panzanella” share a menu is a welcome departure from the all-things-local concepts we’ve seen multiply in the last decade. I devoured especially crispy Brussels sprouts leaves tossed in enough lemon juice to balance fatty chunks of tare-braised pork belly. I monopolized two of three succulent, properly filleted shrimp with creamy jalapeño-infused grits. I slurped up the kitchen’s 48-hour lobster ramen with custom-made noodles. But other selections from this menu needed work. The rice at the center of the arancine was overcooked, and its tomato sauce tasted flat. Lobster patatas bravas were appropriately tender (both the crustacean and the spuds), but the potato lacked the all-important crispy outer layer. The bread rounds on the hoisin-duck crostini were too dry. But these were textural oversights that could be attributed to an off moment in the kitchen or the departure of the restaurant’s opening chef de cuisine.

What really gave me pause across several visits wasn’t these nitpicky details; it was the service. I’m not talking about the usual balance sheet of waitstaff scores and misses: At Izakaya Den, quick knowledge of the English name for Japanese words was among the pros, while forgotten orders headlined a list of cons. What left a more lasting impression on me were the entirely awkward server statements that were common to every single visit.

“This menu is…fishy,” two different waiters stumbled as they described the restaurant’s more traditional izakaya menu. “I only drink PBR,” another told us when we asked him to guide us through the restaurant’s beer selection. One night, a staffer pedantically spelled out: “When I say whole fish, I mean the head, the eyes, the tail….” Later, my date asked the waiter to describe the seafood dynamite, a terrine of baby scallops, baby shrimp, sliced calamari, and clams bathed in a mixture of Japanese mayonnaise and smelt egg. “I hope I don’t offend you,” the server said, turning to me. “They are baby fish.” “Why would that offend me?” I asked. The response: “Some people get offended.” In all fairness, Izakaya Den’s versatile menu can be complicated to explain, but it’s not like these servers were required to make squid guts or slimy mountain yams (two authentic dishes the Kizaki brothers intentionally left off the list of options) sound appealing.

Izakaya Den’s stunning space, impressive collection of sakes, wholly intriguing menus, and (most often) extraordinarily executed food are attracting sophisticated, adventuresome diners, but the restaurant’s waitstaff is noticeably struggling with how to interact with the modern-day customer. It’s unfortunate this group of guests is being given the same dialogue as the restaurant’s equally important cadre of 30-year Kizaki regulars. Both customer profiles are critical (especially in a 15,000-square-foot, 250-seat space), and Izakaya Den needs to be able to smoothly navigate conversations with both. 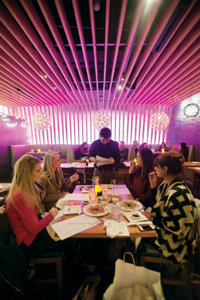 In the upper echelon of restaurants, it is a server’s job to suss out whether he or she is working with the Times Square tourist who’s read about the restaurant in her travel guides or someone who has driven all the way from Vail specifically to be transported by Toshi’s more unfamiliar Japanese fare. Servers at Izakaya Den could more effectively cater to all kinds of diners by first asking a few subtle but revealing questions. “Have you been here before?” “Are you in the mood for sushi, selections from our more daring izakaya menu, or our Western-inspired offerings?”

I believe Izakaya Den employees are capable of finding the confidence they need to bridge this service gap. Until then, meals here are much like looking through a kaleidoscope. With the restaurant’s many rooms and menus and server aptitudes, you can end up with a dining experience that is underwhelming or one that is brilliant. Here’s my suggestion for pointing your visit in the right direction: Ask the accommodating hostesses if there is room to be seated upstairs, tucked along the cozy banquette in the open, light-drenched front room; order things you’ve never heard of from the more eccentric izakaya menu; and, when the servers’ explanations get odd, stop asking questions and just look up the answers to those curiosities on your modern-day smartphone.