The Draw: A tavernlike menu rooted in the farm-to-table ethos

In Aspen’s Roaring Fork Valley, Mark Fischer is as revered as the area’s silver-screen residents. He isn’t just the owner of the most celebrated restaurants in Carbondale and Glenwood Springs (Town, the Pullman, Phat Thai, and the late Six89); this skillful chef is also credited with initiating the valley’s farm-to-table movement. He is an ardent philanthropist and hosts events that benefit Slow Food and the Colorado Avalanche Information Center. Fischer is a respected employer and expanded his restaurant empire in part to give some 130 teammates room to grow. And he’s an all-around nice guy with a keen sense of hospitality. (As if taking a page out of Danny Meyer’s Setting the Table—suggested reading for his staff—this is a man who once invited a puppy into his white-tablecloth dining room on a negative-temperature night.)

Even among Fischer’s mountain brethren, the chef could be called a risk taker. He races down Snowmass Mountain at Olympic speeds (until recently, without a helmet). He knows the ins and outs of seemingly every backcountry route within the shadows of Mt. Sopris. Despite repeated warnings that Glenwood Springs wouldn’t appreciate his food, Fischer forged ahead with the Pullman anyway—an elevated bistro concept that opening sous chef John Little calls “a gateway drug to the foodie world.” The gamble paid off: The Pullman is consistently packed with area regulars and has garnered national acclaim. But quite possibly the biggest risk of Fischer’s professional career was opening a 6,000-square-foot restaurant in Denver’s well-heeled Cherry Creek North.

Some 170 miles from the safety of his Roaring Fork Valley following, Cherry Creek is a neighborhood that has been dubbed a “restaurant wasteland” by food bloggers and industry insiders. Only one (Mici) of eight restaurants that opened in 2009 is still alive to celebrate its five-year anniversary. Yet Fischer bravely entered the scene in December 2011 with a second outpost of Carbondale’s popular Phat Thai. The Asian eatery faltered and closed in June 2013. Fischer blamed the space, which he said wasn’t intimate enough for the concept. With help from Little—whose resumé includes the Little Nell and Blackberry Farm—the persistent duo reopened as Harman’s Eat & Drink a few weeks later. Named for 19th-century Cherry Creek founder Edwin Harman, the restaurant is modeled after the Pullman and offers an all-Colorado beer list, in-vogue protein choices such as goat and rabbit, and details like Concord jam made from a friend’s backyard vines. In a neighborhood that loves its kale smoothies and chia seed pudding, the venture is a noble risk that has yet to pay off.

Chef de cuisine Little’s comfortable, tavernlike menu reads like a food lover’s dream. It’s all the things that have become cliché—local, seasonal, artisanal—but remain important. Little’s goat tostada (with tender white beans; firm, tangy, pickled red onions; a crisp chili-powder-dusted tortilla; and a cooling cumin crema) was memorable for its many textures and for its celebration of an underused meat. A salad of arugula, crispy-yet-soft roasted fresh artichoke hearts, sprouting sunflower shoots, and raw sliced sunchokes was yet another textural coup, even if the sunchoke was underseasoned. During a lunch, I loved the silky chicken liver mousse, served with a jam made from Palisade peaches, but tempura pickled green beans were over-steeped in steaming vinegar. During a dinner, my date and I agreed the citrus aïoli, which came with an otherwise laudable bowl of crispy Brussels sprouts, was oversweetened with agave.

Entrées were equally varied, demonstrating Little’s skill on the one hand and the young restaurant’s myriad hurdles on the other. A butternut squash agnolotti successfully featured the winter star two ways: mixed with mascarpone to fill thin pillows of house-made pasta and in roasted chunks resting alongside toasted hazelnuts, julienned apples, and fried sage in a velvety fennel purée. An oval gratin of macaroni and cheese loaded with fragrant Gruyère, fresh herbs, and the crunch of mustard 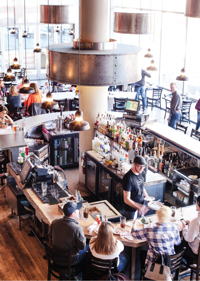 breadcrumbs was one of the best takes on the comfort classic I’ve ever had. And during a lunch visit, I was impressed by a sandwich of red wine–braised short rib and melted fontina set between two monster slices of house-baked bread. But a bowl of (one too many off-tasting) mussels was topped with French fries that needed a little more time in the fryer. A braised pork shoulder was served over dry spaetzle. During one brunch, the stewlike salsa on my chilaquiles was not at all “fresca.”

The beverage program at Harman’s is as thoughtful as the food, if equally inconsistent in execution. Bottles of red wine, all priced under $100, are listed before whites since they pair best with the menu. Market-inspired cocktails are balanced, and their clever names ignite an evening with interesting conversation. (The Baby Doe, a drink made with Colorado’s CapRock Gin, is labeled for a flamboyant woman of Colorado’s silver-mining era.) But Harman’s smart beverage program would be even stronger if it looked the part. A pale ale came in a stemless wine glass, and cocktails came in hefty water tumblers instead of sexy coupes or slender Collins glasses.

Both the menu and beverage program have significant promise despite such shortcomings, yet for their appeal to translate, servers need to better understand both. Waiters mispronounced grape names; one of my companions noticed a cloudy pour from a keg before the bartender; a coffee-colored beer was first described as “not that dark”; and the staff was quick to offer a taste of a wine instead of knowing (or offering to get) answers to fair questions. When it came to learning more about the food, server descriptions often stopped at “It’s good!” There were frequent delays—when taking orders, delivering food, fixing mistakes, hunting down a check…you name it. Two different waiters were too distracted to recite the nightly specials, and one was so preoccupied that he failed to notice when a spider dropped down from the rafters, landed on my shoulder, and needed several swats before it was sent flying. 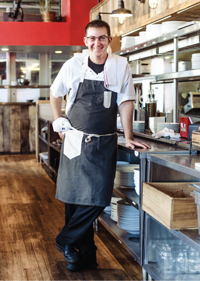 As I ended each dining experience with dessert, I began to wonder if the final course didn’t offer a larger closing argument about Harman’s. A pork dessert (with cake batter ice cream, not-so-crispy pork belly, blueberries, and cinnamon-sugar pork rinds) and an olive oil cake (dry and served with an unsweetened nut purée, basil ice cream, and out-of-season berries) were both too complicated. A salted-chocolate pie and an apple-pear crumble, on the other hand, were straightforward winners. Like these uncomplicated classics, Harman’s is a restaurant that would benefit from simplifying things.

The Harman’s space, with 170 seats, is massive. It’s not the kind of charming 40-seat hole-in-the-wall that can soften flaws found elsewhere in a meal. Moreover, the Cherry Creek customer has a diverse set of needs. Instead of trying to offer something for everyone, maybe it’s time for Harman’s to zero in on its own Cherry Creek version of feel-good food and offer customers (not to mention the waitstaff) a smaller number of (theoretically) superbly executed expressions of that genre. 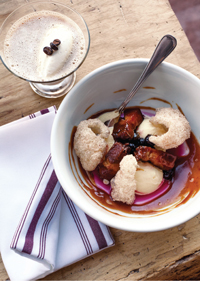 Fortunately for Front Range food lovers, the celebrated chef who would oversee such change is not only a backcountry risk-taker; he’s also an endurance athlete. The 55-year-old Fischer has completed the legendary overnight Nordic trek from Aspen to Crested Butte numerous times and chose to use a fixed-gear cycle for the already punishing Leadville 100. He clearly has the stamina to keep honing the Harman’s experience until he gets it right. In fact, at press time, the restaurant was drafting a new layout for the menu that notes which items are gluten-free, vegetarian, or dairy-free, and Fischer replaced a general manager. “I don’t think a lot of restaurants have the flexibility we have to figure out what Cherry Creek wants and mold into that spot,” Little told me, speaking about nationally owned neighborhood peers who must adhere to certain menus or management styles. “We are in it for the long haul,” Fischer echoes. The real question is whether or not Cherry Creek can give this lauded Roaring Fork Valley restaurateur the patience he needs—and arguably deserves—to get it right.