Homebrewers Kevin Greer and Ryan Skeels took their passion public this summer with the debut of an “urban farmhouse–style” brewery. Translation: Mixed in with the IPAs and pale ales, you’ll find two to four saisons flowing from Baere’s nine taps every Thursday, Friday, and Saturday (currently the only days it’s open), plus Baere-liner Weisse, the brewery’s popular sour beer, served with syrups to sweeten it if you prefer. Pair your suds with takeout from a nearby restaurant. baerebrewing.com

With 700 more square feet than its original location in the Santa Fe art district, Hope Tank—our Top of the Town pick this year for gift boutique—overflows with karma-building opportunities (a portion of every sale goes to various charities) in the form of cheeky home goods, toys, and handcrafted accessories. hopetank.org

Iron skulls set on the corner of a 20-foot-long bar greet you as you enter this 100-seat Latin restaurant. But don’t be scared off. The shared plates menu—organized by “frio” (cold), “caliente” (hot), and “asado” (barbecue)—offers elevated takes on South American cuisine, homemade tortillas, and meats cooked on an oak-fired grill. Whatever you choose, order a side of the sweet yuca bread and pair it all with one of the distinctive mezcal cocktails. We’re partial to Leña’s take on the old fashioned, which tempers the smoky spirit with hibiscus. It’s a drink best enjoyed on the mezzanine, where you’ll get an up-close look at the gorgeous restored tin ceiling. lenadenver.com

Bakerites can now leave fried bar food and greasy ’za behind for good—or at least until after 11 p.m. Gozo serves Spanish small plates (don’t miss the cauliflower and lentil salad) and Neapolitan-style pies charred to perfection in a glowing wood-fired oven. Dressed in distressed wood and clean, white-washed brick walls, the rustic-chic space retains some grit with a garage door front, open to Broadway’s eclectic foot traffic in warm weather, and a striking oversize, contemporary painting by Delton Demarest. gozodenver.com

Steadbrook—a tiny, neatly curated menswear shop—looks to change the modern concept of “retail” in Denver with customer-pleasing extras like an in-store coffee bar. The idea? To encourage dudes (or ladies buying for dudes) to hang out, chat with other shoppers, and ponder hip Thorocraft shoes, bright Norse Project Oxfords, and a house line of graphic tees over steaming lattes. Inspired by skateboarding and surfing culture, the inventory is still fashionable enough for grown-ups with day jobs—a perfect balance for this transitioning neighborhood. steadbrook.com 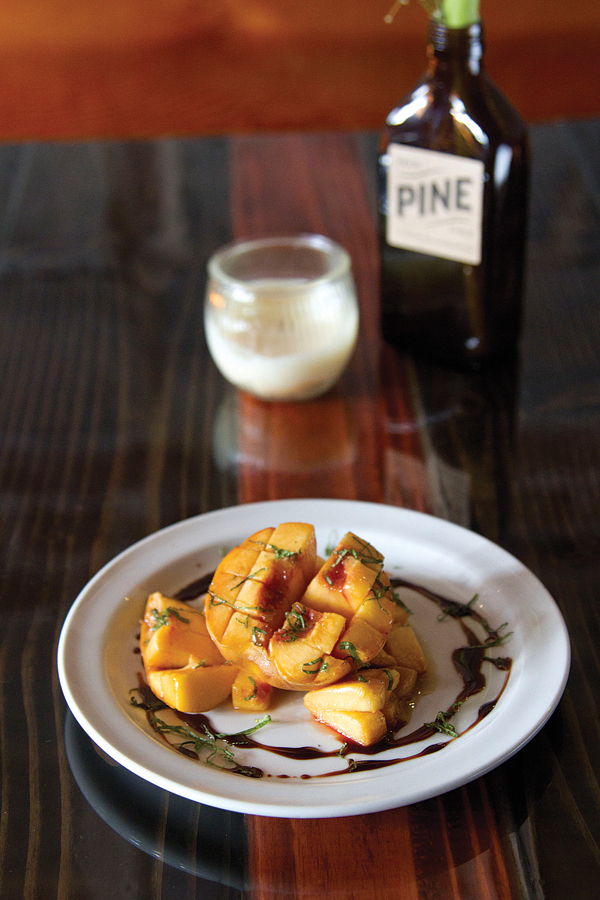 When Jonathan Bitz, a former talent buyer for the Meadowlark, opened this 2,750-square-foot bar meets gallery meets performance venue on a rarely visited strip of Broadway south of Alameda, we trusted he’d bring in great entertainment. He delivered: “opera on tap” Saturdays; weekly open mic nights for songwriters and comedians; live jazz; local indie bands such as Poet’s Row and Rossonian; even (occasionally) burlesque. But we didn’t anticipate the thoughtfully crafted, delectable food. On a recent visit, we savored rabbit-stuffed dates, deconstructed deviled eggs with a sweet tomatillo jam, and a grilled peach with brown sugar and basil. To best experience this funky Victorian-era scene (don’t miss the revolver collection), go for a show—but go hungry. physicopera.com

This beloved shop moved from Berkeley to a Victorian on Santa Fe that was lovingly restored by co-owner Ashley Allen’s husband, Adam Martin. Exposed brick walls now serve as a charming backdrop for a larger selection of the store’s funky, fun papers. coveredwallpaper.com

Launched by a former Breckenridge brewer, Black Sky Brewery’s taproom pours beers with heavy-metal-inspired monikers such as Demonseed IPA. (Their description: “a well-balanced India Pale Ale with a touch of evil.”) We say rock on. blackskybrewing.com

After 10 years at Eighth and Santa Fe, Space Gallery was ready for some more, well, space—and they got it, with a custom-designed 10,000-square-foot building less than half a mile down the road. spacegallery.org