Richard “Duke” Beardsley thought he was blending in pretty well at the Art Center College of Design in Pasadena, California. He was happily working on his assignments at the school, which is known for preparing artists for the commercial world by focusing on subjects such as graphic design and advertising. But Duke
unwittingly earned himself a reputation. “When left to my own devices, this Western vibe bubbled up to the surface,” he says. “Toward the end of the program, someone said, ‘You’re the horse guy.’ And I said, ‘I am?’?”

Given his upbringing, that should come as no surprise. Beardsley was raised with one foot in the city and the other in a stirrup, as his family split time between their home in Denver and a cattle ranch in rural Douglas County. One day, he’d be playing Little League baseball with his friends in Cherry Creek; the next, he was wrangling cattle. “It was not uncommon,” he says, “to be rousted out of bed in the morning, given some gruel and a big horse, and told to keep up.” 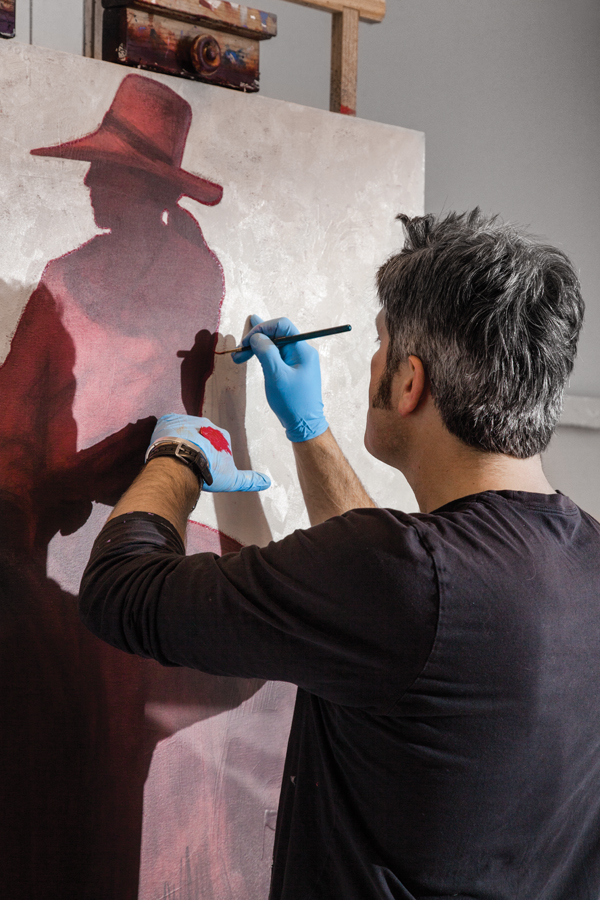 Beardsley, now 45 and back in Denver, has leveraged his reputation into art-world success. His work is displayed at the Denver Art Museum’s Petrie Institute of Western American Art and was chosen as the poster image for the 2013 Calgary Stampede; in January, his pieces will once again appear in the Coors Western Art Exhibit & Sale at the National Western Stock Show. (He’s also preparing a series of pop-up art experiences in Denver for early 2015.) It’s a distinct niche he’s carved out for himself, combining a contemporary focus on colors and patterns with classic images of the West. “My interest,” he says, “is in pushing up the very romanticized traditional icon of the cowboy into a few essential shapes, forms, and flavors.”

The focus goes back to his childhood. “The little boy with hero worship that is still alive in me is drawn to the traits of the Western cowboy—rugged individualism and a spirit of independence,” Beardsley says. “But it’s also familial; as a boy, I watched my grandfather and uncle and father do real cow work on the ranch. It got spun into the mix of who I am.”