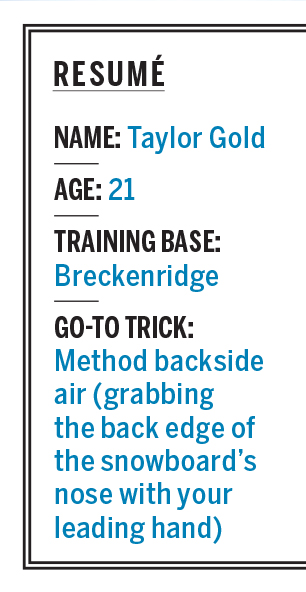 “Breakout year” doesn’t begin to describe Steamboat Springs–born pro snowboarder Taylor Gold’s season last year: He took second at the Sprint U.S. Grand Prix series, topped the podium at the Burton U.S. Open, and made his first Olympic team—all before he could legally order a Coors Banquet. With the U.S. Open returning to Vail from March 2 to 7, we caught up with Gold to chat about tricks, training, and preparation.

2014 was huge for you. What was behind your success?
I’ve had the motivation for a long time. It just clicked last year. I worked really hard the previous summer to get enough tricks to be competitive and to make them consistent, and that worked to my advantage.

Are you on the snow every day?

I’d say I snowboard at least 200 days a year. It’s my favorite thing to do. There’s always something new and fresh that keeps me interested.

The Olympics are the holy grail of athletic competition. What did you learn from your experience in Sochi?

I learned that you can’t always count on good conditions; you have to be able to ride in whatever it is. Whoever rides those conditions the best on that day is going to win.

What are you thinking about during a run? 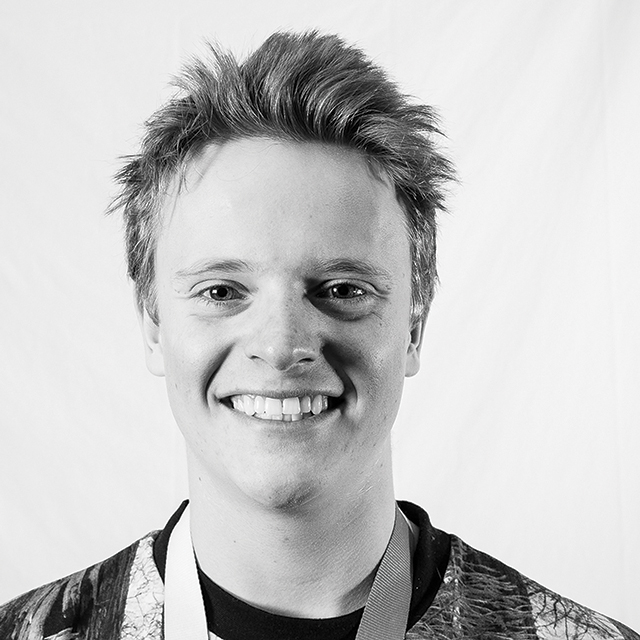 I’m not really thinking about anything. It’s more just focusing on the feeling of it, trying to land on the right spot on the wall and make it feel easy. Usually when you’re competing it’s all muscle memory—just trying to flow through the pipe.

Halfpipe crashes are rough. How do you mentally prepare yourself to get back up and try again?

I try to go find a place that’s quiet and chill. I listen to some mellow music and calm down (usually I get pretty worked up). That helps me come back and focus on the next run.

What’s playing in your headphones during competition?

I listen to classic rock: Heart, AC/DC, and Led Zeppelin.

Will we see anything new from you this season?

I have a couple of tricks I want to add to my run. One example would be a McTwist [front flip with an inverted backside 540]. It’s kind of a simple trick. It’s more of a style trick, and that’s kind of my goal—to add style and creativity to my riding.

Is there a trick you just can’t nail?

I have this total nemesis, a trick I still can’t do: a backside 900. It’s funny because going into the Olympics I thought, I need to learn this trick so I can do well in contests. I tried it for two weeks and couldn’t figure it out. I finally decided to forget about it and learn a double Michalchuk [a side flip transitioned into a backside air] instead, and it ended up working well for me. I don’t know if I would have gone to the Olympics without that trick.

Your sister, Arielle, is also a pro snowboarder and went to Sochi, too. What’s it like to have your sibling along for this ride?

It’s really cool. It’s nice to have that support at contests. If one of us is stressed out about a trick or a run, we can talk to each other. It’s a lot easier to talk to your sister than a friend or even a coach. I think that’s a big asset for both of us.

5280.com Exclusive: Read an extension of the interview below.

When I was younger, my main influences were contests. I didn’t really have that many snowboard videos. I watched halfpipe at X Games and the Grand Prix, and I watched the Olympics. All that drew me toward pipe.

How do you decide on the order of tricks in a run?

Usually, going into a contest I have a few ideas for a run, and then once I ride the halfpipe there’s always these subtle nuances that will direct me toward one idea or another. A lot of the times one wall or one hit is a little bit different than another, so one trick will work better here and another will work better there.

Do you rely on the trampoline to prep your tricks for the snow?

I try to use the trampoline as a tool, but I think that was more for building my foundation. When I was younger I used to jump pretty much every day throughout the summer; I think that gave me a good foundation of air awareness. But I’m too old for the trampoline now—every time I land it hurts.

Did growing up in Colorado influence you as an athlete?

We had a really good halfpipe in Steamboat when I was growing up, and I think that made it a lot more fun. There were a lot of people riding halfpipe at the time. All my friends loved it.

Which snowboarders do you look up to?

I’ve always been inspired by Ross Powers; he’s one of the first guys that I saw snowboarding, because he won [halfpipe gold] in the 2002 Olympics. More recently, I’ve been influenced by Danny Davis—just trying to be more creative. And I really like watching Kazuhiro Kokubo.

Any secret talents outside of snowboarding?

I’ve been playing guitar for a while. I’m still not very good, but I’m working at it. I’m most interested in classic rock and learning blues.