When I moved to Colorado in 2012 after four years of island living on Oahu, I thought I would be giving up Hawaiian food forever. But recently, hungry after a long day of volunteer farmwork in Windsor, I followed my smartphone’s recommendation to nearby Okole Maluna Hawaiian Grill. Despite driving past the restaurant twice before spotting the sign, I knew I was home as soon as I entered and the hostess greeted me with a friendly Hawaiian “Howzit?” 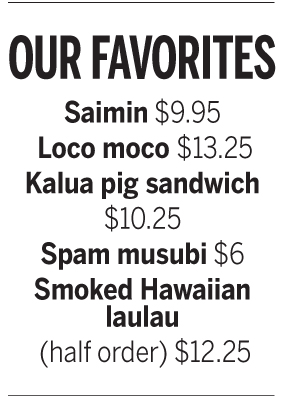 Hawaiian food often gets lost in the plethora of Asian cuisines or simply written off as “pizza with pineapple.” But island-born chef Andy Higa honors tradition with noteworthy dishes such as saimin, a noodle soup similar to Japanese ramen that brings a blast of umami with measured saltiness. Higa ups the Hawaiian factor by substituting Spam (a Hawaiian favorite) for fish cake, barbecue chicken, or beef, which gives the soup a satisfying fattiness without turning it into an oil slick.

However, the real reason to make the journey to Okole Maluna is the loco moco. The iconic burger-rice-egg-gravy combo is a staple in Hawaii. Here, Higa expertly grills hamburgers so the seasoned and charred crust offsets pillowy white rice, silky brown gravy, and an over-easy egg. This is Hawaiian junk food at its best—without the notoriously high island prices.

Higa’s entire menu is worth exploring: The kalua pig sandwich is flavorful and wonderfully greaseless, and the sushi roll–style Spam musubi is salty and sweet without being cloying. So when I start hankering for salty trade winds and ukulele music, I know where to go. Okole Maluna is more than worth the mileage. 431 Main St., Windsor, 970-686-8844, okole-maluna.com