Ten days after the Waldo Canyon Fire ravaged more than 18,000 acres and nearly 350 homes in June 2012, a retired Army couple spotted a slice of hope just south of Colorado Springs’ Garden of the Gods Club and Resort: an empty lot on a ridge looking west. The pair’s townhome had been reduced to ash, and though their insurance company would pay to rebuild the home, that gorgeous piece of property inspired a bold new plan: Sell the townhome when it was finished and build a contemporary house that embraced the beauty of a place they still loved. It would be a fresh start in an unparalleled location. “The lot sits on a rim overlooking the Front Range, Pikes Peak, and Garden of the Gods,” contractor Charlie Shea says. “It’s considered some of the best real estate in the area­—the ‘Gold Coast’ of Colorado Springs.” 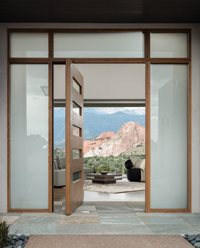 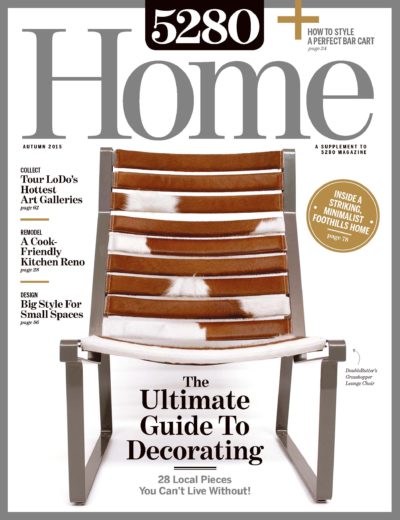 The entrance of the home boasts a custom pivot door (designed by Randy Zimdahl, a local craftsman) that swings open to frame the mountains beyond.

With the exception of a computer and a couple of suitcases hastily packed during the evacuation, the homeowners lost everything in the fire, so they were starting from scratch. Their requests for the team of local design mavericks Shea assembled—including architectural designer Larry Gilland of LGA Studios and interior designer Cindy Senger of the Senger Design Group—were straightforward: a contemporary, minimalist home; a space for their grandchildren to stay; and a design that highlighted the gorgeous views of the mountains. “They wanted a quiet, serene place and palette,” Senger says, a reflection of the couple’s commitment to “honoring life and what they are given, rather than focusing on what they lost.” 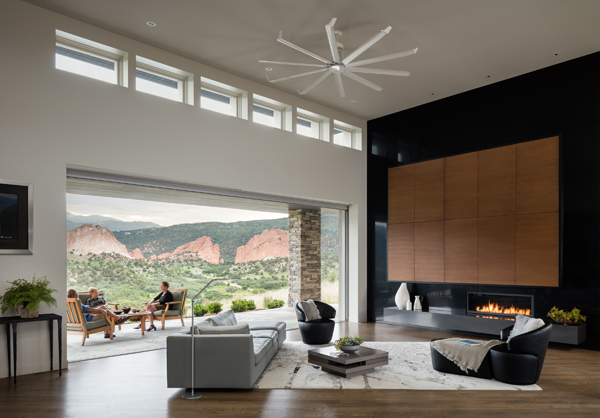 The expansive great room shows off stunning views of Garden of the Gods through a 22-foot sliding NanaWall.

Gilland designed a large, spare home divided into three sections. Two wings—one with the master bedroom and bath and the grandkids’ bunk room, the other with guest rooms—are connected by the common spaces, which include a kitchen and an enormous great room that spills out onto a patio on the edge of the ridge. 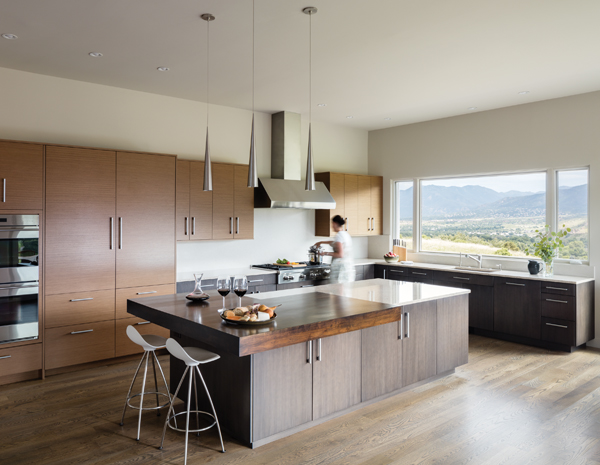 A sculptural island, topped with a combination of hickory and engineered quartz stone by Cambria, is a handsome focal point in the kitchen. The stools are from Design Within Reach.

Every space pays homage to the views, starting with the entrance. While browsing for ideas on home-design website Houzz, the homeowners came across a pivot door, which swings on a central swivel rather than hinges. The design inspired them to tap Colorado Springs craftsman Randy Zimdahl of Woodworks Millshop, who translated their vision into a 500-pound behemoth of a front door that opens to expose sightlines straight through the back of the house to the mountains. “When that pivot door glides open,” Senger says, “you are awestruck.”

Inside, the great room’s 22-foot NanaWall glass window system slides into pockets in the walls, giving expansive access to the west-facing courtyard. “They have a blurred line between interior and exterior when the NanaWall is open,” Senger says. “You move between the great room and the patio, and it just feels like you’re in Garden of the Gods.” Similar views are found in the master bedroom and bathroom, which has a corner window above his and her vanities, making even tooth-brushing at sunrise a highlight.

Top right: Even the master bath affords views of Pikes Peak with a large window above the soaking tub from Wetstyle. The sinks are by Hastings Tile & Bath. Above right: The bunk room, designed for the homeowners’ grandchildren, displays beautiful (and playful) bunk beds from Oeuf LLC. Above left: The master suite offers the same vistas as the great room, as well as a walkout patio that’s perfect for enjoying early-morning coffee.

In a perfect nature-meets-nurture combination, the home’s interiors feature exquisite man-made designs. The kitchen and bathroom cabinets, by Mike Petersen of Plush Designs Kitchen & Bath, are all custom, while the furniture is a mix of modern pieces from Paul Brayton Designs, Calligaris, and Ligne Roset, among others. “The homeowners like the feeling of a large space being very open,” Gilland says. “In the great room, I suggested couches and chairs. They just said, ‘A couch would be nice.’ And there was a long pause. It was almost as if the couch would be the only furniture in that space.”

Despite the home’s serene setting and minimalist style, it’s filled with energy of another sort when the homeowners’ six grandchildren come to visit. Even with a fun, modern bunk room to entice the kids, the great room and patio are the most popular spots, no matter the time of day. “When I wake up and get out of bed, I walk across the living room to make a cup of coffee,” says one of the homeowners. “It’s an enormous expanse of glass. I look at Garden of the Gods and Pikes Peak every morning and just say, ‘Wow.’ We’ve been here for a year, and I say ‘Wow’ every morning.”