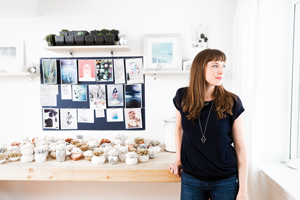 Denver artist Michelle Weddle’s succulent sculptures so perfectly capture the plants’ otherworldly shapes, you could almost forgive the online buyer who—unfamiliar with the arid-climate species—mistook them for the real thing. After all, the molds Weddle (pictured at right, in her home studio) uses to cast her line of plaster creations were made from live plants. It’s a process that took her nearly six months to perfect before she launched her Etsy store, Waterstone Succulents, in spring 2012.

“It was a lot of experimenting and trying out different materials,” says Weddle, who initially learned mold-making and casting as part of the BFA in studio art she earned from the University of Texas at Austin in 2007. Even before she started sculpting succulents, agave and desert imagery showed up in her paintings. Weddle says she is as drawn to the plants’ survival adaptations as she is to their juicy aesthetic.

“Everyone loves that succulents look full of water,” Weddle says. “They definitely create an emotion people are attracted to.” The artist tapped into that response when she founded Waterstone Succulents and—after being featured in Real Simple’s December 2012 gift guide and picked up by West Elm’s Cherry Creek store last summer—soon realized her sculptures had mass appeal. Weddle now uses her patent-pending method to make up to 60 a day (they retail for $30 each) in her Wash Park home studio. For those of us who don’t quite have a green thumb, there’s no more perfect houseplant.

Weddle’s containers and plant sculptures are all interchangeable, so you can keep things fresh by switching out the colors seasonally. The recently introduced rose gold is a warm hue perfect for fall, and we’re loving the hot pink base for a stylish pick-me-up in a home office.