TO THE WIND BISTRO

The Draw: Exquisite food, served with the charm of an at-home dinner party.

The Drawback: Elements of service can be spotty and staff should be able to talk about wine as effectively as they pair beer and whiskey.

When I’m traveling, the only thing more memorable than a flawless restaurant meal is being invited into someone’s home. During a recent trip to Charleston, South Carolina, we checked in for one reservation after the next, but our favorite evening was spent munching on locally procured snacks in a house that was so new to our friends that their pictures weren’t yet hung. A recent tour of the Bay Area included stops at some of the most influential restaurants in the nation, yet there was only one destination worthy of my last night—watching my cousin turn a humble tri-tip into a delicious dinner on his patio. There is beautiful humility, generosity, and warmth to entertaining at home that even the best restaurants cannot offer. That is, unless you are dining at Denver’s 10-month-old To The Wind Bistro—a rare establishment that delivers the charm of a house party plus food as refined as that of any white-tablecloth dining room.

To The Wind is the first solo venture from husband and wife Royce Oliveira and Leanne Adamson, who met while working at the late Sparrow. You sense the restaurant’s homespun vibe the minute you pull up. Beneath the glow of the Bluebird Theater marquee, ivory hand-me-down curtains hang in the petite bistro’s windows. On one visit, the sidewalk chalkboard was covered with a monster that the couple’s children had drawn. When my guests and I opened the wooden door, it was often not a hostess or a server who greeted us, but the chef himself. “Sit at any of the two-tops,” Oliveira cordially instructed as he looked up from the chanterelle carbonara he was plating. Like a spontaneous dinner party, To The Wind doesn’t take any reservations—you just call ahead the night of.

This is a place where the waitress not only tells you her name, but also asks for yours. Fellow diners eagerly scoot their chairs over while you work your way between the tables—which Oliveira built—into one of the tiny dining room’s 16 seats. The agreeable lyrics of Bob Dylan and John Lennon accompany dinner. “Hey babe…” Adamson endearingly calls out to her husband when she needs something for a table. And when the sun dips under daylight’s last thundercloud or one of their daughters runs through the restaurant, it is Oliveira who stops what he’s doing in the kitchen to dim the lights or parent.

Guests holler “everything was great” to the owners as they leave, or say “thank you” and reach over the pass to shake Oliveira’s hand. One night, after the last group left, the couple’s eight-year-old rode a kick scooter around the dining room while her younger sister slept in the basement. “Thanks for hanging out with us,” Adamson said to me as I reluctantly left my seat at the chef’s bar that night, wishing I could linger after hours. 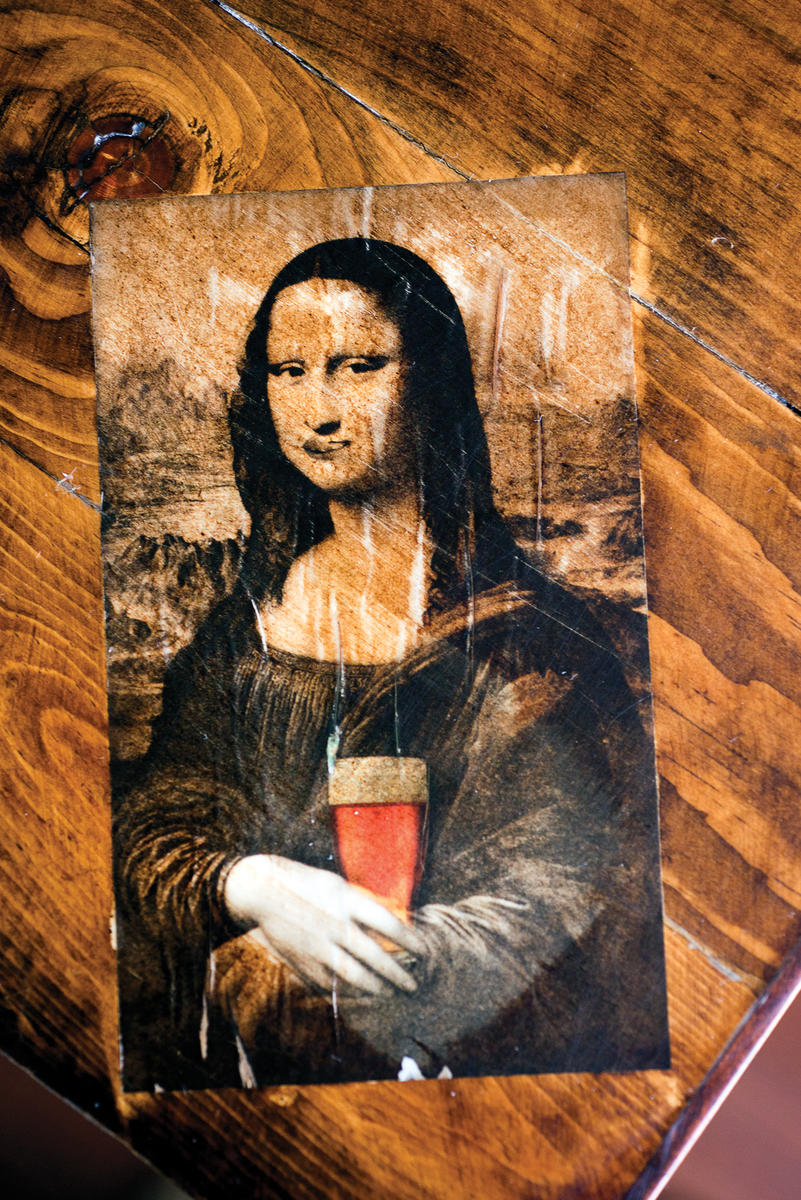 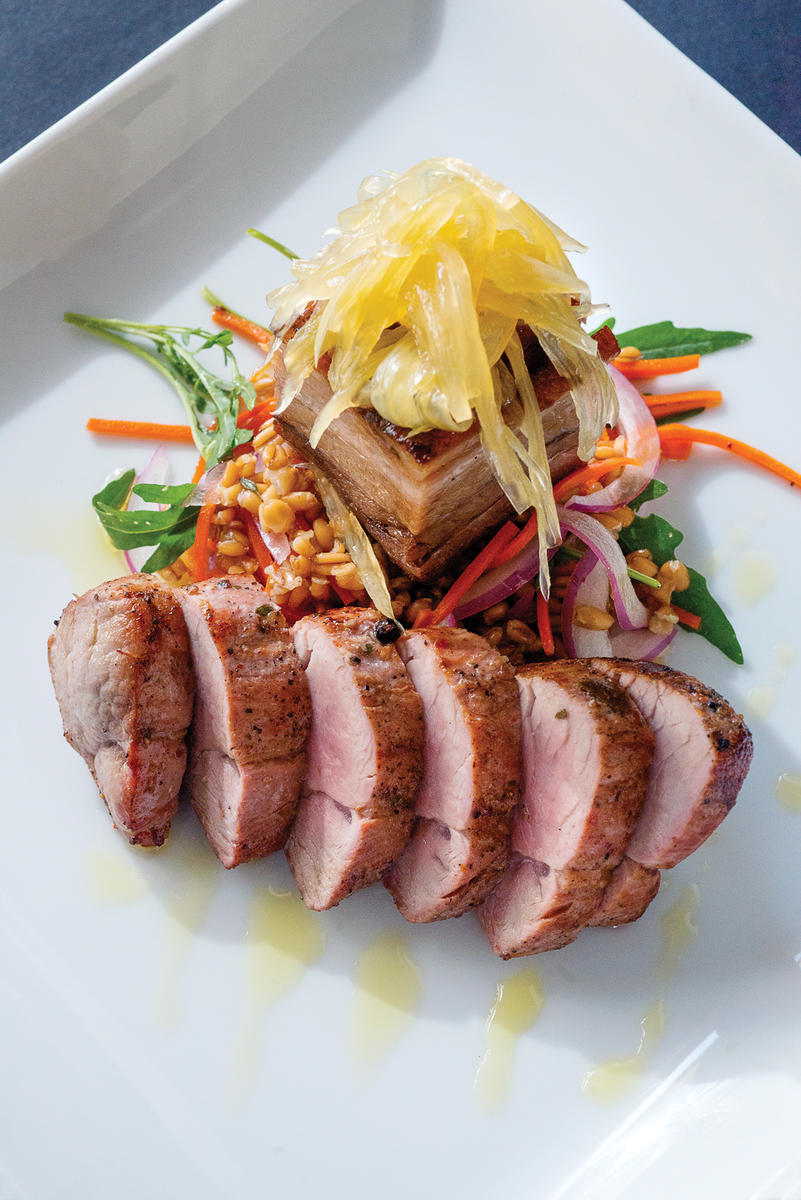 As a subtle (if unintentional) nod to all this graciousness, Oliveira—who has cooked at Mizuna, Axios, and the Village Cork—begins each meal with a dish from the hospitable South: a crock of salty boiled peanuts. The food following those peanuts across many visits was often marvelous. During my first dinner, a pile of thinly shaved, crimson-colored slices of beef tongue pastrami sat atop a house-made brown rye waffle that was crispy at the edges and soft in the center. The starter was adorned with hoppy, beer-spiked mustard and house-weeped sauerkraut. On another evening, an escargot appetizer was well worth ending our Saturday afternoon early to taste (on a previous visit it was sold out before I had a chance to place an order). Oliveira poaches whole snails in a garlic-and-leek broth before tossing them with cream cheese. The mixture is then wrapped in a buttery, thick-but-flaky empanada crust that Adamson—a graduate of Johnson & Wales University in Rhode Island and pastry chef at Adagio and Cake Crumbs before To The Wind—makes. The dish gets topped with earthy oyster mushrooms and a generous heap of Parmesan cheese. During a girls’ night out I fell for a salad of broiled black tiger shrimp set atop crisp, sweet Bibb lettuce and flavored with thinly sliced serrano peppers, translucent radish discs, bias-cut scallions, crescents of red onion, and a poblano- and habanero-spiked sauce of tomatillos. The enveloping but fleeting heat was tempered by a parsnip aïoli that was far more elegant than the humble menu term, “ranch,” suggested.

During that visit to the four-seat chef’s counter I was transported by an entrée of rainbow trout. It was so pleasantly unadulterated that—seated just inches from a kitchen that makes its own pasta and buttermilk—I caught myself daydreaming that a friend had reeled it in himself. The lightly floured, skin-side-down fillets retained their crispiness the entire time I worked my way through the dish. Sautéed fingerling potatoes snapped before giving way to the bright tang of poaching vinegar. House-soured crème fraîche added fat to every forkful of acidity. On a date night stop, I was taken by a duo of pork. The plate included tenderloin and an astonishingly well executed pork belly. The brittle top—thin and salty, like a good potato chip—gave way to a thick cut of tender, orange-spiked belly. The dish came with a gorgeous heap of julienned confit fennel that resembled tangled sea kelp and tasted like candied citrus.

Dessert that same night was my favorite of Adamson’s many creations, which she bakes every morning and ties to the seasons. My husband and I shared her devil’s food cake—layered with hydrated, puréed apricots and covered in chocolate ganache—which reminded me of Sachertorte, a dense, rich chocolate cake Austria is famous for.

But despite all these hits, some misses came on my very last meal. Apparently in response to mounting accolades several months after opening, Oliveira brought in a friend to help in the kitchen. Under their combined watch, a buttermilk chicken did not want to leave its bone, green beans that accompanied a bistro steak were overcooked, and an impressive carrot cake was overwhelmed with one too many streaks of dried cranberry burnt-sugar caramel. A regular sous chef has since been hired, and Oliveira will need to be sure his efforts are as consistent as the dishes I had when the owner was in the weeds all alone. 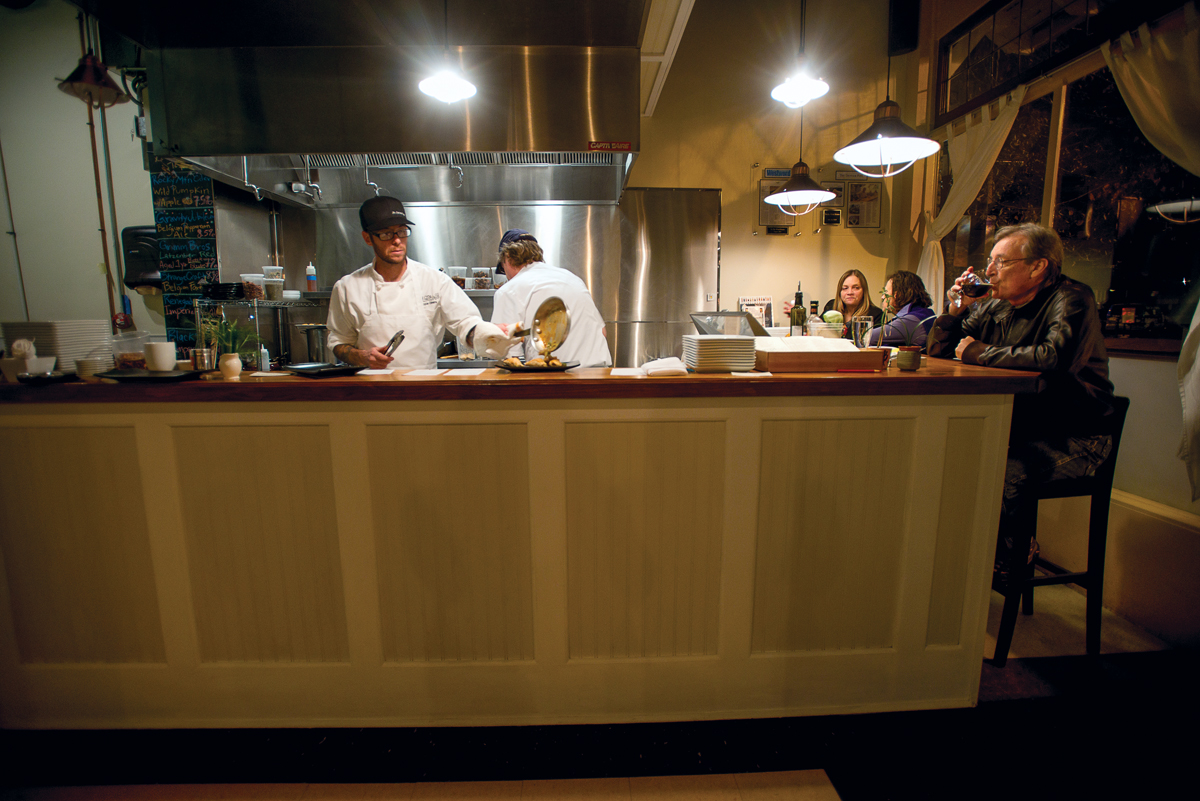 More important: The couple needs to groom To The Wind’s servers. Service on all of my visits—each with a different waitress—was impressionably hospitable. However, there were a plethora of gaffes. These included missing flatware; mixed-up or forgotten orders; the need to call Adamson over to answer easy menu questions; long gaps between bringing drinks and taking our order; and—on more than one occasion—the frustration of being told that, by the time they got back to us, the kitchen had “just” run out of a dish. “We are doing our best to disappoint you tonight,” a waitress told me early into one meal. “We are out of everything; no napkins, no forks,” she admitted.

Named for the phrase “three sheets to the wind,” the restaurant also needs to give some thought to its beverage service. Oliveira and Adamson—one-time homebrewers—focus heavily on beer and whiskey. I commend any restaurant with a clear, focused vision, however narrow. Together, the couple can recommend beer pairings with the best in the business—a Crazy Mountain IPA to go with that duo of pork or a Strange Brewing barley wine to pair with a pineapple upside-down cake. They carry selections (like hard-to-find Belgian imports) you’ll talk about for days. But without “ale house” or “beer hall” in its name, To The Wind must expect that some customers will prefer wine. While the restaurant does offer a handful of basic wines, it needs to be able to sell such offerings. One server’s inability to answer the most rudimentary wine questions was laughable even to her. “Sorry. We are such beer people,” she said, clearly embarrassed.

Like the fork-less waitress before her, our rotation of servers almost unanimously apologized for any missteps—a commendable quality. Mistakes happen. It is how they are handled that really matters. But To The Wind would do even better to actually fix the problem by hiring a dedicated, regular server that is every bit as charmingly informal as Oliveira and Adamson but, when needed, has the front-of-the-house prowess that their food deserves.

When you are a guest in a friend’s home, such flaws don’t matter. When you are eating beautiful food in a spot that feels like home, they almost don’t matter. But when you receive the bill—however appropriately priced—you are reminded that they do. To The Wind will no doubt thrive as a neighborhood favorite. But if it can tackle a few shortcomings, it could also quickly become a place where you take your visiting guests—after a cocktail in your living room while waiting for a table to open up, of course.