Clicking into my skis at 11,307 feet on Berthoud Pass near Winter Park, I can’t help but admire the surroundings. Snow-covered slopes, punctuated by stands of spruce and lodgepole pines, rise from each side of the summit parking area. An expansive sky dotted with a smattering of clouds leans toward a soft shade of cobalt blue. As small groups of backcountry skiers weave their ways up into the mountains, a breeze moves through the trees, dispersing a fine powder that glitters as it catches the sun. The scene is snow-globe perfect. But that doesn’t make me—a first-time backcountry skier—any less nervous.

In my mind, backcountry skiing is for badasses—people with expert skills and supreme confidence in those skills. Although I can hang in many of Colorado’s other quintessential athletic endeavors—cross-country skiing, road biking, trail running—I would not characterize myself as a hard-core downhill skier. Which is why the extreme level of cardiovascular fitness, high-elevation oxygen deprivation, and potential for avalanches associated with backcountry skiing have always scared the heck out of me. But today, at the (repeated) request of my domestic partner, Jean-François, and his 12-year-old daughter, Sophie, both avid backcountry skiers, I am reluctantly facing my fear.

From the parking lot we trudge across the road toward the west side of the pass and a section known as Old Terrain Park—Berthoud Pass’ bunny slope equivalent. The angle isn’t steep enough to trigger avalanches, but I’m still wearing an avy beacon, a transceiver that would signal my location under a hypothetical (and terrifying) pile of snow.
Sophie, who’s a definite badass in the making, has been skiing since she was five. So it’s no surprise that she can easily demonstrate the technique I’ll need to move up the mountain. Aided by “skins,” bristled nylon liners attached to the bottoms of my free-heeled skis for traction, I learn to keep my weight back, push my hips forward, and use my poles for balance. “Now,” Sophie instructs, “push one ski forward from the hips, then the other.” With my cross-country skiing experience, I pick it up quickly on flat ground and experience a fleeting moment of excitement when I think: Maybe this won’t be so bad after all. Then we start climbing—and my optimism quickly fades.

From 1937 to 2001, Berthoud Pass was a ski resort, although it didn’t operate continuously during the later years due to ownership changes and financial troubles. In 2003, the chairlifts were sold, and in 2005, the U.S. Forest Service demolished the defunct ski lodge. Shortly thereafter, Berthoud became popular with a different kind of skier: the “earn your turns” crowd, which shuns lift-served terrain in favor of climbing mountains using telemark or alpine touring skis. Once considered a fringe sport in the United States, backcountry skiing is steadily gaining popularity. According to SnowSports Industries America, 50,000 skiers experienced Colorado’s backcountry in the 2013-14 season, up from 28,000 in 2012-13. 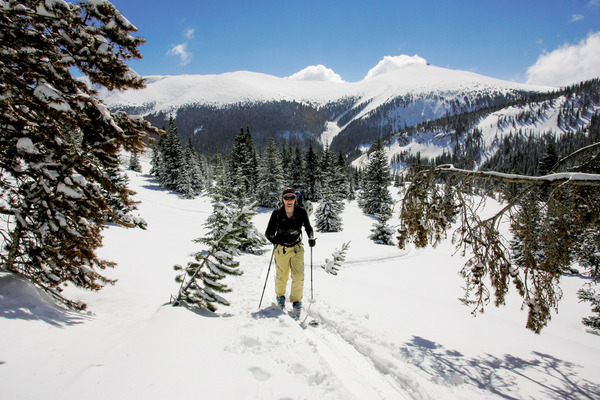 But as more people venture into the backcountry, the probability of avalanche fatalities increases. Unlike ski resorts, where snowpack safety is overseen by members of the ski patrol (who use explosives to prompt slides before skiers do), no one is responsible for Colorado’s one million acres of skiable backcountry terrain. Backcountry skiers bear all the risk. Some spend hundreds of dollars on how-to classes, such as a three-day course from Denver-based American Institute for Avalanche Research and Education (AIARE) that teaches them what to look for in the snowpack, how to test snow stability, how to read terrain and avoid danger zones, and how to rescue skiers if the worst should happen. Others learn as they go from experienced friends. In Colorado, backcountry skiers rely heavily on forecasts posted online by the Colorado Avalanche Information Center to determine when and where to find the safest conditions. Sometimes it works and sometimes, unfortunately, it doesn’t. Last season, slides took the lives of eight people in Colorado—all of them in the backcountry.

Surprisingly, it’s not the risk of avalanche that’s on my mind as I skin up Old Terrain Park. Part of the reason I’d agreed to try backcountry skiing in this specific location was the relative safety of the terrain. While Berthoud has plenty of dangerous areas (and expert backcountry skiers who venture there), it also has three beginner-friendly slopes. “There’s never been a slide at Old Terrain Park,” says Ray Hughes, an AIARE Level 1 Avalanche Instructor with American Avalanche Institute Level 3 certification and an apprentice guide with the American Mountain Guide Association. “The slope angle is only 25 degrees; it needs to be 26 or higher for snow to slide.” That fact combined with the frequency of skier use (which compresses the snowpack) makes Old Terrain Park one of the safer places to try backcountry skiing in the state. However, it’s worth noting that just because a slide has yet to happen there doesn’t mean it can’t. In fact, just to the right and left of Berthoud’s beginner-friendly runs lies avalanche-prone terrain. 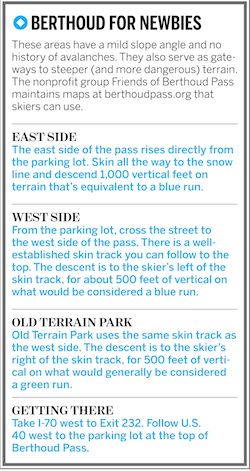 Instead of worrying about tsunamis of snow, my mental energy is locked onto how difficult it is to move uphill wearing skis and a backpack full of extra layers, avalanche gear (including a shovel and probe), water, and snacks. No

matter how slowly I go or how often I stop to rest, my legs feel heavy and sluggish, and my breathing is so labored it’s borderline alarming. “It’s like cross-country skiing—which is known as one of the most cardio-intense activities on Earth—on steroids,” says Ellen Miller, an outdoor fitness coach and backcountry skiing enthusiast in Vail. “You’re not only using the big muscle groups of the legs, but, with the poling, also the muscle groups of the upper body. And with a pack on, well, there go the lungs and the core. It’s truly a full-body workout.”

It takes me more than 30 minutes to climb the 0.3-mile route. Jean-François and Sophie could have moved much faster without me. Neither looks worn out or even winded. Still, as I survey the stark white peaks above treeline, I feel a sense of accomplishment. Not many people can make it to a view like this in winter on their own two feet. If the day were done, I would have been beaming. But it’s not. I still have to ski down—and there are no trail signs to show me where I’m going.

Before our descent, we need to remove the skins from our skis. Jean-François does it by balancing on one ski while peeling the skin off the other. I’m appropriately impressed, but too fried to try it myself, and settle for taking off each ski before removing the skin. My head pounds from the elevation (we’re somewhere around 11,800 feet) and the exertion, and I feel a bit dizzy. As I stuff the skins into my backpack, Jean-François removes a thermos of hot chai from his pack. We pass it around until my heart rate and breathing begin to level out.

Looking down the tree-studded slope, I realize how disorienting—and exhilarating—it is to ski without the helpful green, blue, and black arrows pointing the way at ski resorts. Our way is simply down. Jean-François leads, and I follow his line to avoid trees, rocks, stumps, and anything else that might be buried just under the snow. This bunny slope skis differently than the groomed ones at ski resorts: I can’t see where it ends, and the deep powder makes turning much more challenging. But I think I’m doing pretty well until Sophie shouts, “You’re doing it wrong!” as she skis up behind me.

We stop, and she explains the point of backcountry skiing is to schuss where no one else has been. I protest that I don’t want to hit anything until she promises me the snow is deep enough that I don’t need to worry about what’s underneath. As we continue our plunge, I try skiing next to Jean-François’ line, not in it. I realize Sophie is right: My skis float, almost like I’m gliding. For a brief moment, I forget how badly my thighs and calves and glutes are burning. Instead, I smile broadly and let out a little whoop.

And then it’s over. After 30 minutes of brutal scaling and three glorious minutes of floating on untracked powder, we’re back where we started. “Now what?” I ask breathlessly. “Now we do it again,” Sophie says, with an energy and exuberance I currently lack. I decide to head back to the car for a catnap while my family goes for round two. I may never be a badass, but I do resolve to try a second run the next time.