In an unmarked hangar next to a busy runway at Denver’s Centennial Airport, George Bye, the CEO of Aero Electric Aircraft Corporation (AEAC), peers into the cockpit of a small plane. The aircraft is missing its nose, a propeller, and wings. The synthetic leather seats are sitting askew on a workbench not far from two rectangular batteries, miscellaneous power tools, rolls of wire, and a dry-erase board crammed with instructions for the engineering team. To the untrained eye, the workspace looks like a messy man cave. But in the shell of the sleek white aircraft, Bye sees the future of general aviation.

If all goes according to Bye’s plan, the two-seat plane—dubbed the Sun Flyer—will be the first electric aircraft approved by the Federal Aviation Administration for general aviation in the country. Unlike the small planes that whine on the runway outside the hangar door, the Sun Flyer does not have an internal combustion engine. Instead, it features a basketball-size electric motor and 10 batteries fueled by energy from the grid.

Without a noisy, pollutant-spewing internal combustion engine, the Sun Flyer would offer important environmental advantages over traditionally powered flying machines. But what Bye, a 59-year-old engineer and former Air Force pilot, is most excited about is the money it could save: He estimates it would cost about $1 per hour of flight using an electric motor. For comparison, a gasoline-fed engine sets a pilot back about $50 per hour (depending on gas prices, of course).

Bye anticipates the aircraft could be used to train new pilots less expensively and, along with other advances in electric aviation, pave the way to more efficient commercial planes. Current commercial models comprise three percent of all U.S. greenhouse gas emissions. “We have an opportunity to change general aviation, to start the next generation of how we fly,” Bye says. “This is the leading edge of that whole possibility.” The question is: Can AEAC surmount the significant engineering and certification challenges it’s facing to allow the Sun Flyer to take off?

In the aviation industry, electricity has never been taken seriously as a fuel source. Twenty years ago, the batteries for electric motors barely had the energy density to lift a tiny model airplane off the ground; getting a multiton plane aloft with batteries and a motor was unthinkable. But technology has developed rapidly over the past 10 years. Electric motors have become much lighter and more efficient and require less maintenance. Battery capacity has improved by about three percent every year for the past decade and is expected to continue at that rate, and advances in composite materials (such as plastic reinforced with carbon fiber) and aerodynamics are making it possible to design sleeker, lighter planes that need less power to get off the ground.

Numerous one-off electric airplanes have already taken flight, and more are in development. In July 2015, two Swiss pilots completed the first around-the-world journey in a futuristic, large-winged solar-electric plane called Solar Impulse. That same month, Airbus Group flew a two-seat electric aircraft, named the E-Fan, across the English Channel; the flight was part of a program dedicated to developing quiet, emissions-free commercial flights. The company is currently working on an updated version, the E-Fan 2.0, and aims to do flight tests in 2018 with the hope of putting it into production as a flight-training aircraft. Pipistrel, a Slovenian company, is already selling a gliderlike two-seat electric aircraft in Europe and, without FAA certification, on a limited, recreational basis in the United States. This past summer, NASA announced it was one year into a five-year project to develop an experimental electric airplane, the X-57, which would be the first new experimental aircraft the agency has designed in 10 years. 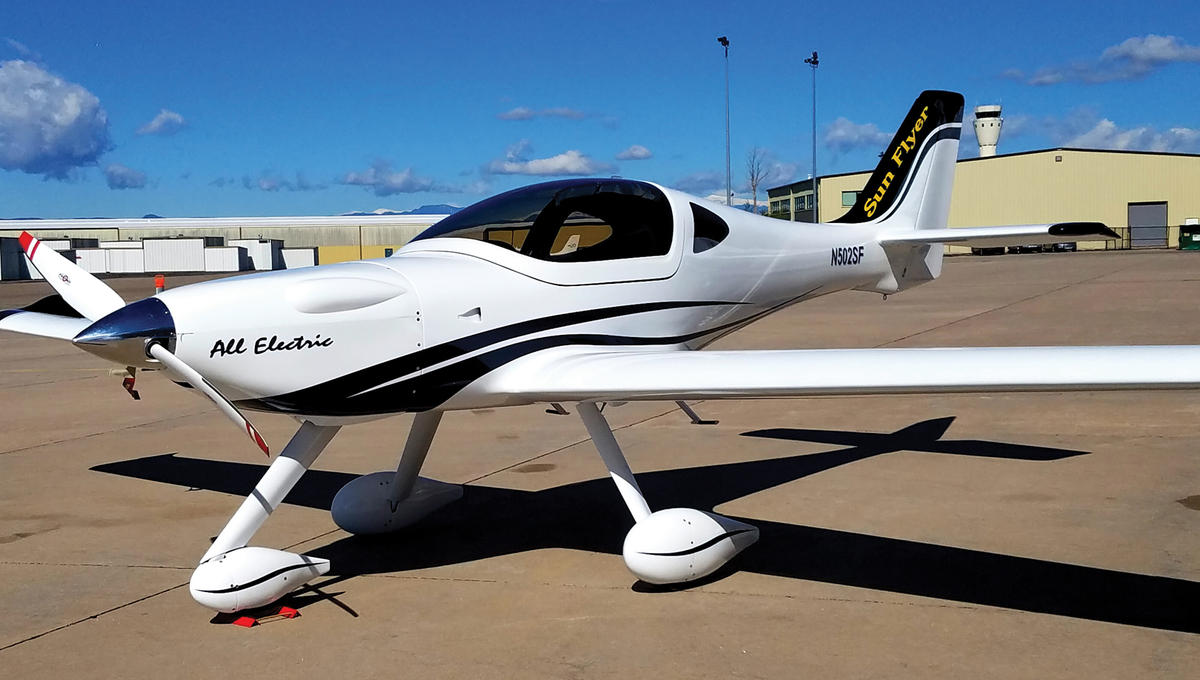 UP IN THE AIR: The Sun Flyer will have to pass FAA certification before it goes to market. —Courtesy of Jenn Matasy/Aero Electric Aircraft Corporation

The electric aircraft trend hasn’t found a soft landing in the United States—yet. That’s partly because FAA regulations do not allow for any aircraft without a “single, reciprocating engine”—in other words, an internal combustion engine. The directive was intended to prevent small aircraft from using rocket engines, but critics say it stifles innovation and makes it impossible to certify a plane with an electric motor. To get around the rule, AEAC is negotiating with the FAA—an often lengthy and expensive but not uncommon practice—to qualify the Sun Flyer as a special class of aircraft, which will allow the company to use an electric motor for propulsion.

If AEAC can navigate FAA certification (the plane still needs a type certificate, which will approve the aircraft design, and a production certificate, which will approve the manufacturing processes) and the other challenges of getting a plane to market, the Sun Flyer could, Bye hopes, be an elegant solution to an industry-wide problem: an enormous, looming pilot shortage. A 2016 report by Boeing estimates the industry will demand 617,000 new pilots worldwide by 2035. Although dismal starting salaries can discourage aspiring aviators, the main deterrent is the exorbitant cost of learning to fly. Pilots learn on small planes—two-seat Cessnas and Pipers—and get private licenses before they graduate to larger commercial planes. Fuel alone costs between $15 and $50 per hour, depending on the plane and gas prices, and in-flight lessons cost about $150 per hour. To qualify for an Airline Transport Pilot certificate, the gold standard in commercial aviation, a pilot must have 1,500 flight hours.

Lower costs, less noise, and reduced emissions are great boons for general aviation (essentially all civilian flights except commercial airline service), but the general public shouldn’t expect to board electric passenger jets at Denver International Airport anytime soon. “Going from the smaller general aviation aircraft to the larger commercial aircraft is a quantum leap in terms of technology development,” says Thomas Rigney, X-57 project manager at the NASA Armstrong Flight Research Center. Advances in battery capability and systems that integrate this technology with electric motors and flight-control software will take at least 15 years to develop for the first regional-size electric commercial jets—and they will most likely be hybrids. But to help larger commercial hybrid jets take flight, technology developed in smaller hybrid and electric planes, such as the Sun Flyer, is crucial.

George Bye has been obsessed with planes for as long as he can remember. As a kid in the 1960s, he took rides in his parents’ plane, and as an adult in the Air Force, he flew the Northrop T-38 and the Lockheed C-141 in Operation Desert Storm and Somalia. In his post-military career, Bye has continued to stoke his passion for planes by guiding several endeavors to advance flight. In the mid-2000s, he worked to develop the Javelin, a slick sports-car-like two-seat plane that promised a top speed of 500 knots. Although flight tests went well and the company had 150 deposits in hand, the venture folded during the Great Recession. In 2010, Bye founded the Green Flight Project and set out to convert a Cessna Skyhawk 172, one of the most popular airplanes of all time, to electric power. The company flew a prototype more than 20 times, but ultimately the plane’s batteries didn’t have enough energy capacity for adequate flight. Bye Aerospace, another company Bye runs, successfully developed the Silent Falcon, an electric drone, which first flew in 2009 and for which production sales began in 2015.

All of those projects helped prepare Bye for his current mission: to design the Sun Flyer. AEAC has already collected deposits and purchase options for more than 85 planes, mostly from flight schools. For the Sun Flyer to make it to market, though, a host of factors still need to come together. Some engineering quandaries—like whether it’s possible to design a propeller that could help charge the batteries with current technology or if solar panels are worth their weight in energy production—remain unresolved. Bye is also banking on further advances in battery technology and his engineers’ ability to synch disparate technology into one smooth-running machine. Of course, all of that has to happen first; then Bye has to worry about getting the plane through FAA certification. It will likely be a turbulent path even if things ultimately go his way.

Still, Bye is convinced he and his team can overcome the obstacles. A year ago this month, the company flew a one-seat prototype of its electric plane for the National Park Service’s noise measurement evaluation. The agency found the plane to be nearly silent. In May, the company unveiled the two-seat prototype of the Sun Flyer, and flight tests were planned for early 2017.

“Although there are still a lot of people saying there’s no way that batteries will ever provide enough energy to replace the energy of gasoline, the giggle factor around electric aviation has gone away,” says Erik Lindbergh, grandson of famed American aviator Charles Lindbergh and CEO and founder of Powering Imagination, an organization that’s accelerating the development of an electric plane for air tours in national parks. “George has a good-size lead on one of the first markets for electric aircraft, and that’s the training market. If he can crack that sector, it’ll be a big deal for aviation. I hope he succeeds, because aviation needs it and the public wants it.”

True to form, when pressed Bye has even bigger—one might even say outrageous—dreams for the future of electric flight. He imagines designing the equivalent of a Tesla with wings, an aircraft that would not only reinvigorate interest in general aviation and help train new pilots but also make new realities wholly possible. “Imagine if there were a business like Uber that had 10 Sun Flyers, and whenever you wanted to go up to Aspen or Vail you could just go get on the plane and get there in 25 minutes—no pollution, no noise, not even a dollar’s worth of electricity,” Bye says, his voice rising with palpable excitement. “That’s amazing. That’s coming.”