“Now that’s a beautiful avalanche path,” said Art Judson as he gazed at the wallpaper on his computer, which depicted Hahns Peak split by a broad white stripe. It was 2007, shortly after I’d first met Jud, as his friends and snow science colleagues call him. Standing in the kitchen of his Steamboat Springs home, we admired the proportions of the gully, which shrugs off its snow about four times each winter. “I named it for my wife. It’s the Milly O.”

It wasn’t my idea of a romantic gesture. After all, the Milly O is a potential killer, not a book or a boat. But Judson saw nothing strange about dedicating the menacing slide path to his ladylove. That may be because throughout his 40 years as a snow researcher, it hasn’t always been clear which one he cherished more: the plucky, petite brunette who bested his rock-climbing skills or the volatile snow queen.

As a young man in the 1960s, Judson trekked across notorious slide zones, working as a snow ranger for the U.S. Forest Service. Snow science was still an emerging field in those days; avalanches weren’t well understood. But Judson sought to solve all of their mysteries, logging 18-hour days gathering data from mountaintop weather stations and driving through blizzards to watch hillsides release their snowy loads. Worried about avalanches threatening the crews constructing the Eisenhower Tunnel, Judson became known as “the man who never sleeps” among tunnel builders for two reasons: He’d sometimes leave Milly’s side at 3 a.m. and drive from Fort Collins, where they lived at the time, to the tunnel construction site to check on avalanche paths. He’d also frequently call highway personnel to ask about recent slide activity. (Avy paths on the tunnels’ west side now bear the names of Judson’s three sons as well as Mitsy, the family dog, and Mishka, the family cat.) In 1966, he founded the first-of-its-kind Colorado Avalanche Warning Program, now known as the Colorado Avalanche Information Center, or the CAIC. He also served as the lead stability evaluation instructor at the National Avalanche School in Nevada.

His obsession with snow seemed boundless, until open-heart surgery in 1998 (Judson had experienced heart troubles since 1973) forced a bit of a slowdown. A short man with Santa Claus cheeks and earnest, bespectacled eyes, Judson, who is now 82, gave up skiing at age 78, but he continued to monitor the avalanche zones around Steamboat by driving into the mountains and aiming his binoculars at distant slopes. Sometimes Milly went with him.

Her namesake avalanche path is a real humdinger—an approximately one-mile-long plunge down a treeless 38-degree slope on a peak 45 minutes north of Steamboat Springs. One midwinter day when the snowpack was unusually stable, my ski buddies and I skinned to the top of Hahns Peak and peered down the northeast-facing Milly O. We didn’t dig a pit to analyze snow layers; we trusted the stability reports we’d followed since the flakes started falling the previous October. We felt we knew what hid beneath that fluffy frosting. I still remember the electricity in my brain and the burn in my legs after that glorious chain of perfect powder turns.

“I’ve skied the Milly O,” I proudly told Judson that day at his house. His face instantly sharpened. “But I don’t expect I’ll get to do it again,” I backpedaled.

The force of a mid-size avalanche registers three to 10 tons per square meter; for comparison’s sake, the blast that leveled Hiroshima, Japan, reached an estimated 4.5 to 6.7 tons per square meter. The fastest avalanche ever recorded, in Norway, traveled at 145 mph. Thirty to 60 mph is more common, but that’s still speedier than most humans attempting to escape. Each winter in the United States, an average of 27 people die in avalanches.

But before Judson fixated on such tragic figures, he was a child riveted by the transformative power of snow. Growing up in New York’s Adirondack Mountains, where his Yale University–educated father ran lumber camps and logging operations, he remembers waking up and raising the blinds to find that yesterday’s autumn landscape had become a luminous white wonderland overnight. His fascination never faded. 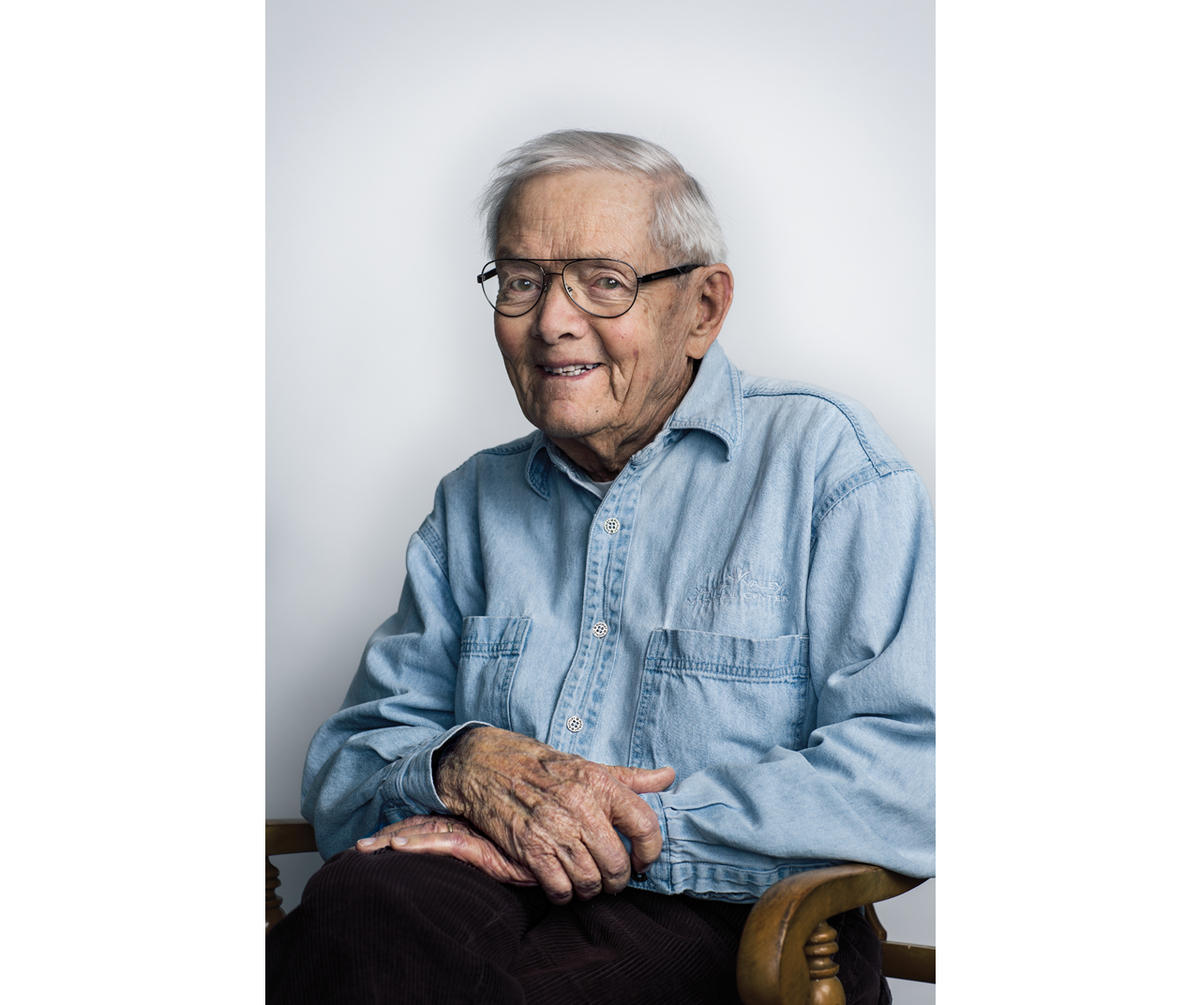 After a tour with the Marine Corps, taking some geology courses at University of Colorado Boulder (where he met Milly Opie, a fellow rock climber, in Rocky Mountain Rescue), and earning a forestry degree from Oregon State University, Judson found his calling when he saw a magazine article about snow rangers controlling avalanches at California’s Squaw Valley in preparation for the 1960 Olympics. An avid skier, he yearned to spend his days on mountainsides, and detonating explosives to release unstable snow promised bonus thrills. At the age of 27, Judson finagled himself an equivalent job with Arapaho National Forest, where he worked under veteran snow ranger Dick Stillman.

Judson followed his mentor around Berthoud Pass, collecting weather data and learning the safest ways to identify and approach avalanche paths. But his own research didn’t give him the big-picture understanding he thirsted for. He wanted to predict the future, to know what each snow-covered slope was destined to do. So in 1966 he founded the Westwide Avalanche Network, which pooled information from various entities (including ski areas and government agencies) across 12 states. Westwide Avalanche Network revolutionized North America’s fledgling field of avalanche research. “It revealed patterns and how they developed, which couldn’t be done without huge data sets,” says the CAIC’s current director, Ethan Greene. Such networking remains standard practice at the CAIC and other forecasting centers, and it preceded current data-sharing tools, such as web- and mobile-platform Avanet, by 50 years.

Judson also pioneered the practice of communicating avalanche conditions to the general public. It wasn’t part of his job description (“I was just supposed to be collecting data,” Judson recalls), but Swiss researchers issued forecasts, so Judson took to calling Denver’s KLZ radio (and later, KOA-TV) when avalanche risk was high. Ed “Weatherman” Bowman, a celebrity broadcaster, dramatized the updates with hand-drawn maps and lively storytelling.

“It was the beginning of a broader effort of educating the public that grew into the avalanche warning system,” says Don Bachman, who climbed with Judson at Oregon State and was at one time the president of the Center for Snow and Avalanche Studies in Silverton. Judson’s establishment of the Colorado Avalanche Warning Program in 1966 inspired a host of forecasting programs in other mountainous regions, from Utah to Washington. Says Bachman: “He pioneered the idea of a public agency expressing an avalanche forecast in a cautionary narrative to the general public.”

Meanwhile, Judson was developing a mathematical model that, Greene says, was also ahead of its time. Starting with a watershed runoff model, Judson created a snow-specific version that took in various factors—such as temperature and the mass flux of blowing snow—and produced the avalanche probability for a general region. He published his work but lacked the time and funding required to make the model fully operational.

Decades later, forecasts still only apply to general areas. Even in 2016, researchers continue to be unable to predict the behavior of any individual slope because snow’s mechanical properties can vary greatly from one spot to another. Judson discovered that early in his career when he was visiting Berthoud Pass weather stations after a snowstorm. He figured the snowpack was stable. During his drive up to the Continental Divide, he’d observed that none of the slide-prone paths along U.S. 40 had avalanched, and he saw no shooting cracks—instability indicators—propagating across the snow as he skied. He didn’t think he needed a safety rope that day, but his partner insisted on holding Judson’s tether as he stepped into an avalanche zone.

He heard a boom; the mountainside shuddered. Six inches uphill of his skis, a fracture line shot across the slope. As refrigerator-size blocks of snow hurtled at him, Judson went airborne, landing hard on the bed surface left behind. He watched the wave of snow snap trees and fill the air with a cloud of ice, and he felt the tension of the rope that saved his life.

“After all these years, Jud and I still agree avalanche forecasting is forever burdened with uncertainty,” says former snow ranger Ron Perla, Judson’s contemporary and author of the 1976 U.S. Forest Service Avalanche Handbook. Judson, whose work has likely saved countless lives over the past 50 years, puts it this way: “You may think you know what the slope will do. But you don’t.”

One sunny morning this past September, the Judsons greet me at the door of their new home in Arvada. Advancing age compelled them to sell the Steamboat Springs residence they built in 1969. Front Range living puts them closer to their sons, but Judson still trains his eyes on avalanche paths: From his doorstep, he points out a slide-prone gully on Table Mountain. “It probably doesn’t go that often, because it doesn’t get enough snow,” he admits. “But if you get a 17-inch storm like that one in 1961….”

Back then, Judson says, the majority of winter fun-seekers stuck to established trails and ski areas. Those who did explore the backcountry had zero access to avalanche information, so they assumed total responsibility for judging whether a slope might slide. That uncertainty intimidated most skiers into waiting till spring, when freeze-thaw cycles stabilize the snowpack and let travelers cross slopes in relative safety.

These days, better gear makes it easier to trod upon untracked snowfields, and pricey lift tickets have convinced some enthusiasts to seek cheaper thrills in the backcountry. Avy courses and forecasts help them make safer decisions. But such information may also delude them into thinking they know more than they do. Certainly that was true of me that February day on the Milly O, where no old-timer would’ve dared go before April. And I suspect it’s true of my peers: Most avalanche victims these days are described as “experienced.”

“Snow is much more complicated than people think,” Judson says, standing in a home office that evidences his compulsive pursuit of understanding. There are stacks of scientific journals, avalanche reports, and a framed photo of avalanche chutes on Rogers Pass. Judson dedicated—and almost lost—his life to avalanche prediction. Yet now, as an octogenarian, he says uncertainty is the only constant. “Even today, we can’t tell what a given avalanche slope is going to do.”

Highway crews battle the ambiguity of the snowpack with bombs: By intentionally releasing snow that impends roads, they offer motorists a higher degree of security. But recreationists, lacking explosives, roll the dice. “It’s wonderful to take risks and win,” Judson says. “But you don’t always win.”

Judson therefore preaches the gospel of avoidance. Instead of relying on information to justify a gamble, he explains, travelers should use their knowledge to steer clear of slide potential—which is a hard sell, given how reluctant people are to believe that disaster could happen to them.

“You could be smarter than that,” Judson says to me, his piercing stare leaving no doubt that his statement was a directive. I look away from the legendary forecaster and silently promise not to disappoint him.