On a lazy sunday morning not long ago, I received a tempting text message from a friend: “Meet up for Denver’s best Cubano sandwich?” I was sold. An hour later, I found my group at one of Buchi Cafe Cubano’s patio tables, where they were already wrapping up cups of the Sunnyside spot’s delectable café con leche.

The petite Cuban eatery, which opened in 2008, offers six breakfast options and six lunch sandwiches. But before I could really peruse the menu, one of my friends told me I had to try the Aye Conyo. I cast the menu aside, and when the server stopped by, our order was simple: four Aye Conyos and four Negra Modelos for the table. 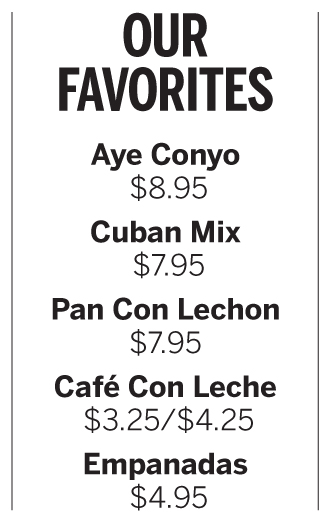 “Aye conyo” roughly translates to a Spanish expletive you might cheerfully exclaim upon your first taste of this sandwich, and here’s why: Chef-owner Emmet Barr (who came to Denver from the Florida Keys) takes the traditional Cubano—roasted pork, ham, Swiss cheese, pickles, onions, and mustard—and then adds pepperoni, turkey, hot peppers, and Key lime mayonnaise. A panini press toasts this combo, which costs $8.95, until the buttery bread is golden brown and the insides are warmed through. My first taste of the big-enough-to-share sandwich confirmed that my friends knew what they were talking about.

After we finished our last bites, we balled up the white butcher paper wrapping, took our final sips of beer, and pushed back from the table in satisfaction. Then we agreed to meet up the following weekend: same time, same place, same sandwich. 2651 W. 38th Ave., 303-458-1328, buchicafecubano.com