The Draw: A seasonal, modern French menu that is rooted in the classics without being overly cliché.

The Drawback: Service is consistently poor, a flaw that is especially apparent when the 9,000-square-foot space is empty.

It’s been nearly a decade since I first discovered the well-matched pairing of theater and brasserie. Given a shared love of music and food, a date invited me to see Mozart’s Le Nozze di Figaro at the Met, followed by dinner. After the opera, we stepped from the warm afterglow of New York City’s Lincoln Center into the blustery November wind, along with hundreds of other cab-seeking theatergoers. When, finally, my date declared “Broadway and Spring” to our driver, I knew instantly that his big surprise was Balthazar.

The iconic French brasserie was a curious choice to me. Keith McNally’s restaurant (one of New York’s most coveted reservations for at least two years after it opened in 1997) was still plenty good some seven years in, but it was all the way downtown. I spent the 20-minute ride to SoHo wondering which Upper West Side classic I would have selected instead—until we walked in. The warm yellow light streaming from mirrored columns kissed each of my cheeks. The informal but informed service was a calming reprieve from the emotional intensity of the opera. Steak frites and a basic Bordeaux were comforting choices after four hours of following supertitles.

To pair theater with French brasserie, Denverites have it easy: One must simply walk a single block from the Denver Performing Arts Complex to Robert Thompson’s
Le Grand Bistro & Oyster Bar. No subways. No cabs. No problem. On a night when Book of Mormon or another blockbuster is in town, Le Grand hums with that irresistible brasserie charm. An oversize globe sconce, a red awning, and 125-year-old tile floors greet customers. The clinking and clattering of flatware against china in a packed dining room is more alluring than any Pandora station. The menu of steak tartare, mussels Billy Bi, and a sampling of other classics is as comforting as it comes. And the food, now prepared under chef John Broening—the respected Denver chef who spent several formative years living in France—is, for the most part, exquisite.

It’s not the first time Broening and Thompson have worked together. The pair opened the highly acclaimed, if short-lived, Brasserie Rouge in 2003. Broening went on to cook at Duo, the late Olivéa, and Spuntino (the Highland restaurant he owns with his wife, pastry chef Yasmin Lozada-Hissom). In July, the chef reunited with Thompson, becoming the culinary director for Le Grand and two restaurants set to open this year. Broening’s immediate impact on the food at Le Grand, which opened in 2011, has been noteworthy. 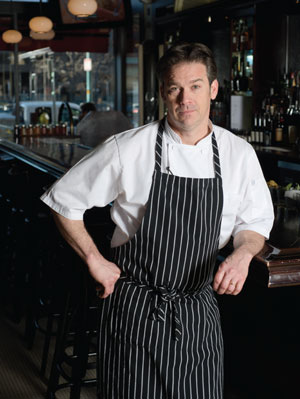 In the months since Broening began, I’ve had a tangle of tender, gently charred octopus arms that he brushed with lemon and served with salty olive tapenade. A friend and I sparred over a salad of shaved fennel ribbons, blanched discs of celery root, fresh watercress, pine nuts, and dried figs. I couldn’t stop eating the silky creamed carrot purée that accompanied Broening’s braised short ribs, which he brilliantly brightened with fresh horseradish—a nod to his Jewish heritage. During another meal, house-made mustard spaetzle came bedecked with the heart-shaped shoot of an oca plant (a South American tuber) from Denver’s Hunt & Gather, a testament to the chef’s commitment to procuring interesting ingredients from tiny, local farms. Over lunch, I ignored every calorie present in a jambon and Brie sandwich that was rich with buttered sourdough, soft, rind-on cheese, and house-brined, house-smoked ham. As if that weren’t enough, the sandwich came with thinnish-cut frites that were too perfect to put down. And on a night when Broening made rounds in the dining room, I tasted the only duck leg—crispy, tender, salty—that’s ever rivaled the one cooked for me in a home kitchen in the French countryside.

Le Grand’s menu isn’t flawless. There was an underseasoned gemelli and braised rabbit entrée, and on one visit, several brunch items were off, including egg whites that were still clear (I later learned Broening wasn’t in the kitchen). But even during meals in which the chef’s work tastes impeccable, his food is a dependent entity: one that needs its performance partner to really shine. 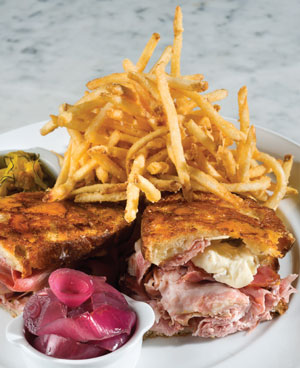 You see, whether on a packed theater night or a slow weekday, the service at Le Grand was uniformly unacceptable during my visits. Across five meals, a bottle of sparkling water was set down and forced on us without a server ever asking—as is Thompson’s intention—whether we’d prefer “gas or no gas.” The staff repeatedly faked its way through wine and beer knowledge, bringing us tastes of things that were precisely what we asked to avoid. A bartender poured me the wrong drink and then checked in far too late for us to bother correcting the gaffe. During one dinner, our server informed us that the restaurant buys its pasta “at the store,” when in fact, Broening’s spaetzle and ravioli are lovingly house-made. On another occasion our waiter thoughtfully presented our cheese plate but blanked on one selection. Instead of checking, he simply said, “I forgot.” Food arrived before drinks; appetizers showed up after salads; a table littered with threads of Gruyère from French onion soup wasn’t wiped clean; knives were missing from entrées that required them; plates were cleared early and without asking; and leftovers we said we’d take home were tossed. On one visit, a waitress asked personal questions (“Do you have kids?” “What do you do for a living?”) throughout the meal. Perhaps she was bored in the otherwise dead dining room.

On a busy night, the happy hum of this massive space masks certain service shortcomings. You are too busy eavesdropping to notice mistakes or, when you do, they seem understandable given how slammed your server is. But when the 9,000-square-foot restaurant sits empty, Le Grand’s deficiencies are no longer the battle wounds of a packed house, but all-too-obvious character flaws. Those century-old floors feel less storied and more decayed. You begin to wonder why Thompson settled for the dishes (tippy, too quick to cool, rimmed instead of slurp-able, and otherwise unfit for Broening’s food) that he inherited from the previous tenant. With the thrill of people-watching entirely absent, you have nothing better to titter about than the locker room–style bathroom doors. But most important, you aimlessly gaze around the vacant room thinking about how one of Denver’s few bona fide restaurateurs has the opportunity to gut and rebuild this town’s notion of service.

Thompson is no stranger to the kind of adversity that 18th-century composers loved to dramatize. He’s overcome tremendous personal tribulations, the least of which was an inner-industry divorce. The professional chapters of his story are no less compelling: This is a man who—by year’s end—will have opened and owned 13 restaurants in his career.

Twenty-six years ago, Thompson got into the food service industry not by washing dishes in the back of the house but by bussing tables in the front. In a town rich with one-off chef-owners, Thompson is refreshingly proud to be an all-of-the-house restaurateur. And he’s a glass-half-full kind of guy. He asked me during our interview if a manager ever checked on my table during any of my five visits. When I indicated that not once did this happen, he was sincerely grateful for the feedback so that he could use it to improve the Le Grand experience. In a broader conversation about service in Denver compared to other cities he has worked in (the list includes Portland, Oregon; Austin, Texas; Chicago; Washington, D.C.; and Nashville, Tennessee), Thompson said, “I think it’s great that [Denver’s] shortcomings are being called out.” Le Grand needs a greatly elevated front-of-the-house experience to give Broening’s food the stage it deserves. If anyone is capable of overseeing that kind of reinvention, it’s Thompson.