I’m paying for my green tea at the sunlit counter of Queen City Collective Coffee’s Five Points location when the barista swivels the payment screen toward me. It’s asking me for a tip amount before finalizing the sale. My brain races: Am I supposed to tip for pouring hot water in a cup? How much? 20 percent? I don’t want to be rude—I like this place and its staff—but this cup of tea is already costing me a whole lot more than the mere cents it would at home. Frazzled, I click the $1 button, say thanks, and head toward my friend.

Tipping is complicated. It was before the pandemic, and it’s only grown more so as restaurants, nationally and locally, experiment with updates to the traditional model. Bills today arrive with service charges and cost-of-living fees. Crafted Concepts (Rioja, Ultreia, and other restaurants), for example, added a three percent Denver minimum wage surcharge in 2019, while Amethyst Coffee Co. raised its prices and eliminated tipping altogether in 2020. “It’s very confusing for a consumer right now,” admits Juan Padró, CEO of Culinary Creative Group, whose concepts include A5 and Tap & Burger.

I don’t think I’m the only who’s dealing with tipping fatigue. I want to give as much as I can, but sometimes it doesn’t feel justified. And I’m not talking about the quality of service. At a bachelorette party, a bartender in RiNo poured my group four shots of tequila; when I went to pay with my credit card, the pre-set options for tips ranged from 20 to 30 percent, which amounted to a minimum of $10. When I pick up a baked good, I’m presented with the same tip options as I am at a fast-casual restaurant. If there’s a bottle of wine on the tab, I’m at a loss as to whether I need to factor its cost into my tip (an $80 bottle would equate to a $16 tip if abiding by the 20 percent industry standard). I don’t want to be judged as a paltry tipper, but I also have my own budget to consider.

I decided to do what any principled but prudent diner would do: I asked the experts—local industry folks and etiquette professionals—how they navigate the complex world of gratuities. The result is our guide to “Tipping 2.0,” below. We hope it simplifies your decisions the next time the bill arrives. 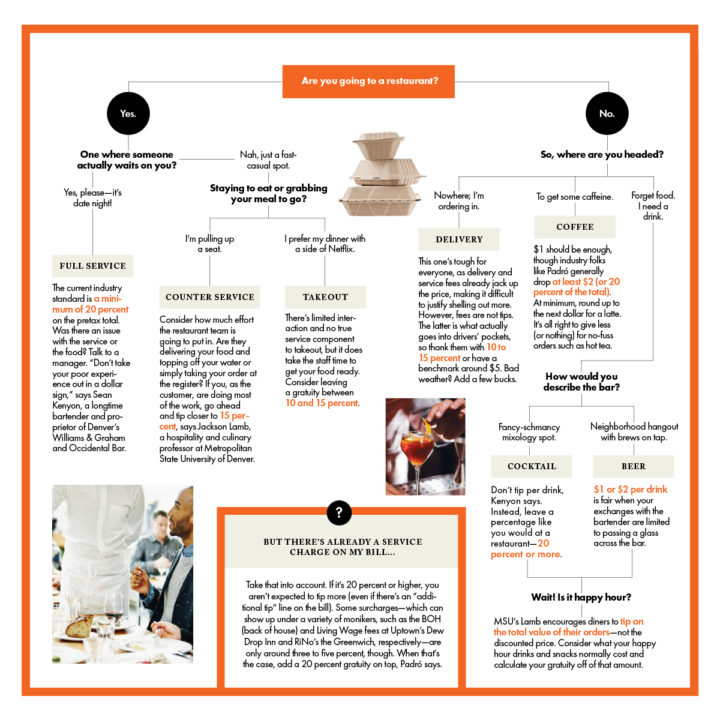