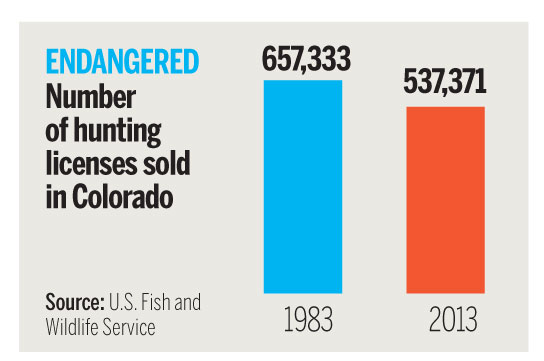 Each year, about three million visitors pass through Rocky Mountain National Park, many hoping to catch a glimpse of the 600 or so elk that make their way down from the high country every fall for mating season. But the tourists who stop along Trail Ridge Road to snap a shot of the elk probably don’t realize they’re able to capture classic Colorado moments like these precisely because someone else wants to shoot our wildlife, too—with a bolt-action rifle.

Hunting and fishing license fees are the primary source of funding for wildlife management in Colorado, making the state’s nearly one million hunters and anglers the unexpected benefactors for the rest of us nature lovers. Last year, hunters contributed $53.4 million in fees—money used to sustain Colorado critters like deer, elk, and moose and to protect the land the animals rely upon. But hunting—and the revenue it generates—has declined over the past three decades, with the average number of hunting licenses, permits, and tags sold each year down about 18 percent from its peak in the early 1980s. “We have a small percentage of people paying for something that everyone benefits from,” says Colorado Parks and Wildlife (CPW) spokesman Randy Hampton. “That’s not sustainable in the long term.”

As a result, CPW faces a projected $25 million shortfall for wildlife spending over the next five years. Translation: less training and support for wildlife officers and biologists on the ground, Hampton says.

Officials cite urbanization and a lack of interest from younger generations as the primary culprits for flagging participation. So CPW has developed programs to boost hunter involvement, from clinics to help experienced hunters sharpen their skills to organized hunts aimed at attracting first-timers. And last year, the state’s Wildlife Council launched its Hug a Hunter campaign, airing television ads to educate the general public about the importance of license fees.

So far, the offensive appears to be working: Big-game applications actually increased four percent this

year. If the rebound doesn’t take hold, however, Hampton says the state might need to search for new ways to fund wildlife management. Or millions of tourists and locals may find it increasingly difficult to catch a glimpse of Colorado’s creatures at all.