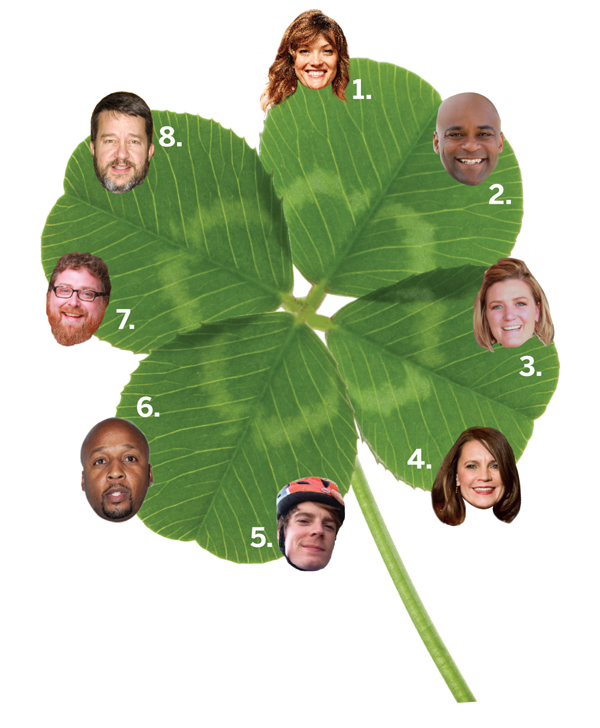 1. At age 19, U.S. Paralympic snowboarder Amy Purdy had both of her legs amputated below the knee. The doctor who saved her life gave her a swami bracelet charm. “It reminds me of all that I have overcome,” she says.

2. Mayor Michael Hancock is convinced a ratty gray sweatshirt he’s worn around the house for decades has “nearly magical qualities.”

3. Beast & Bottle general manager Aileen Reilly attributes some of the restaurant’s success to the traditional Irish Claddagh ring she inherited after her grandmother’s death. She’s worn it for 20 years.

4. In middle school, Denver Film Society festival director Britta Erickson wore a lucky 1968 penny that her grandpa gave her in her navy blue penny loafers. Her current “object of affection” is a necklace with a mini harmonica and skeleton key she bought in Park City during the Sundance Film Festival.

5. Ryan McCann, BikeDenver’s policy and outreach manager, doesn’t have a good luck charm so much as good sense: wearing a bike helmet. “It has saved me from a number of injuries,” he says, “including being attacked by a pigeon while riding to work on the Cherry Creek Trail!”

6. After Denver Nuggets head coach Brian Shaw’s mother died in 1993, he turned the diamond in her wedding ring into an earring. “I always felt like my mother had good advice for me and was always in my ear telling me things,” Shaw says. “I feel if I have something of hers close to me, she’s going to look out for me.”

7. Given Old Major’s reputation as an homage to pork, it’s no surprise that restaurateur-chef Justin Brunson’s token of good fortune is a pig named Gus, a plastic swine the size of a hand that Brunson’s wife bought him nine years ago.

8. Four Mile fire chief Bret Gibson has a number of mementos, including a charred coffee mug from the Fourmile fire and a page in his notebook with a list of all the members of his volunteer department. Gibson says, “It reminds me that my main mission is to bring them all home.”

BikeDenver executive director Molly North, wears a turquoise ring on her right ring finger; her mother bought it in 1975 on a spontaneous eight-month trip through South America with North’s dad.

Denver Center Theatre Company actor Sam Gregory believes more in rituals than good luck. But one thing he knows for sure: If he keeps a copy of the script for the play he’s performing in his dressing room, he’ll almost certainly forget a line.

As a ski patroller at Wolf Creek Ski Area, Kyle Frye could use good vibes. He always carries a fossilized sea lion tooth that was carved by native people in Alaska in his pocket. “It has been lost many times and then just shows back up in my pocket,” Frye says. “I once lost it while building fence and found it on top of a fence post two weeks later.” It connects him to nature and reminds him that if he’s lost in the wilderness, he has the fortitude to take care of his basic needs.