Earlier this summer, the Adam Sandler–led movie Pixels imagined a world in which aliens—having interpreted our video games as a declaration of war—use characters from classic arcade games to attack humankind. Considering the caliber of Sandler’s recent work, Pixels probably won’t stay on the big screen too long, but it did get us thinking about how we could bring some popular video games to life here along the Front Range.

In this game, players earn points by hitting targets. It’s the same principle at Topgolf, a tricked-out driving range in Centennial that opened in late August. Up to six players share a booth and fire microchip-embedded golf balls at 11 targets ranging from 20 to 215 yards away—meaning you don’t have to hit the ball like Rory to rack up points. And unlike the typical driving range, Topgolf serves Colorado beers on tap and creative pub grub, including Mushi—a sushi-style roll with chicken instead of fish inside a jalapeño tortilla. A one-time $5 membership card, plus an hourly rate per booth of $25 to $45 depending on the time and day; topgolf.com 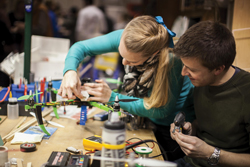 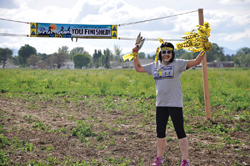 This game and its 20 offspring are often credited with igniting the zombie craze, which spread to books (Pride and Prejudice and Zombies) and movies (Zombieland) and comes to Parker on September 19 in the form of the 5KRunDead. Held at Flat Acres Farm, the event is more capture the flag than competitive race, with participants choosing to be either runners or zombies (makeup provided on-site). Runners receive three flags that represent their health, while zombies try to steal them. If you lose all your flags, you become a member of the walking dead; the zombies who capture the most flags win prizes. $70 for runners, $60 for zombies; 5krundead.com