The Draw: An inviting industrial space, the most consistently exemplary pizza in Denver, and a philosophy centered on domestic ingredient procurement and carbon footprint reduction.

During my final year in college, I took a family road trip though southern Italy. Our itinerary included finding the birth town of my great-grandfather, who immigrated to America via Ellis Island in 1898. The day we spent northeast of Naples looking for his former home was a disaster: My dad rammed the bumper of our rented Citroën into a grassy hillside and, on another missed turn, got stuck in an olive grove. Notoriously resolute, he tried to salvage the cold, muddy December day by taking us to dinner at a small ristorante. Let’s be honest: What I really wanted that night wasn’t some perfectly lovely full-service dinner, but the nearest Autogrill and a hot shower.

Autogrill’s truck stops along Italy’s “Autostrade” (national highway system) far surpass the American versions that serve chili dogs, crinkle-cut fries, and 600-calorie Slurpees. Instead, these on-the-go eateries are known for frequently, and unexpectedly, providing some of the best meals of your trip. The $2 billion public company is one of the concepts after which Kelly Whitaker loosely modeled Cart-Driver, his RiNo pizza and oyster shop. Like Autogrill, Cart-Driver features counter-service dining, food served quickly, and an impressive take on everyday foods, such as pizza.

Located in two repurposed shipping containers at 25th and Larimer streets, Cart-Driver (which takes its name from the “carrettiera,” who once delivered produce and other goods from the Italian countryside to the city) is an informal spot. And Whitaker—also the brains behind Basta in Boulder—celebrates the industrial vibe. A seasonal flower arrangement near the front door is not a precious vase filled with bright, imported blooms, but a beer stein of flowering dill. The restaurant exclusively offers beers in cans instead of bottles, in part because they’re “easier to stack and store,” Whitaker says. Extra bottles of self-serve screw-top wines are resourcefully kept under the banquettes. Pre-batched cocktails are designed so as not to require garnishes or straws. Small baking sheets of Hama Hama oysters and pizzas like the Daisy, a margherita pie, are set on steel planks that rise above tables to create more room. Whitaker wants the space to resemble a shipping container with these little details. “We try to leave things alone and really focus on the plate,” he says. 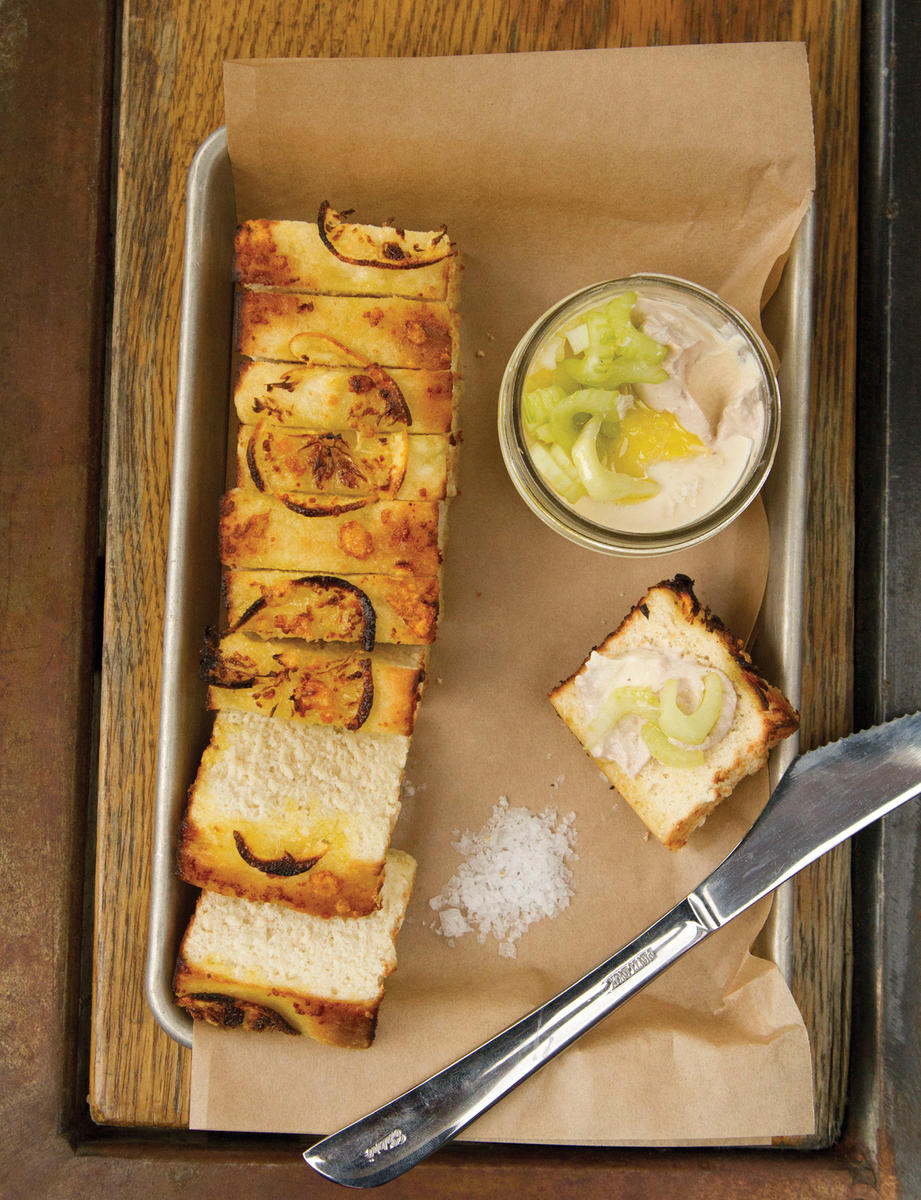 This emphasis on flavor was obvious within moments of my first meal. One of my girlfriends and I settled into two coveted stools in the 320-square-foot dining space. I ordered a glass of kegged bubbly. A jelly jar of silky tuna mousse was topped with translucent salmon-roe-size balls of olive oil and served with fresh house-made focaccia. I polished off every gram as I watched a T-shirt-clad pizzaiolo rearrange New Mexican scrub oak in Cart-Driver’s 1,000-degree wood-fired oven. (It is a technique that Whitaker, the grandson of an Oklahoma vegetable farmer, calls “farming the coals.”) When our pizza of spicy pepperoni, freckled mozzarella, and Calabrian peppers arrived, I was convinced, before it even hit my lips, that Cart-Driver was a special place. The pie was sliced, American-style, and not soft and soupy in the center, as in Naples. It was a confident choice given the current mania over artisanal wood-fired pizza and the ways in which restaurateurs are distinguishing themselves within that race. “[Soupy pizza] has a time and a place,” Whitaker later told me. “For me, that place isn’t Denver, Colorado.” Just by looking at my slice, I could see the crust had that coveted juxtaposition of black, charred bubbles against ivory dough. At once crispy and soft, creamy and spicy, each slice tasted as flawless as it looked.

On another visit, the namesake Cart-Driver pie married generous chunks of Colorado pork sausage, chile flakes, and addictively bitter broccoli rabe (which has since been replaced by Tuscan kale). I also vividly remember every bite of Cart-Driver’s clam pie. A generous fistful of tender littleneck clams, pieces of house-sliced pancetta that looked like ribbon candy, tender cloves of confit garlic, and hand-torn sprigs of fresh herbs were drizzled with an oozy panna sauce fortified with liquor from the clams. One night, I threatened my anonymity with my intense study of the restaurant’s game-changing mushroom pizza. A tangle of oyster and shiitake mushrooms from Hazel Dell, washed-rind cow’s milk cheese, and roasted onions was dotted with curiously delicious clots of “onion ash.” Co-owner Andrew Birkholz told us they make it by incinerating onions next to the coals.

Pizza wasn’t the only thing that was impressive at Cart-Driver. Across my visits, oysters smartly came with the judicious and seedless exterior edge of a lemon. Sides of mignonette rotated with the microseasons, incorporating peaches, roasted leeks, celery root, smoked potatoes, and other choices that made the sauce more inventive (and a shade less acidic) than the classic shallot recipe. Cart-Driver offered sophisticated canned beers, such as Sanitas Saison from Boulder and Westbrook Gose, a fabulous brew Whitaker discovered on a trip to Charleston, South Carolina, for a sustainable food summit. Soft-serve vanilla gelato, the only dessert, was nutty on one visit, delightfully smoky on another. 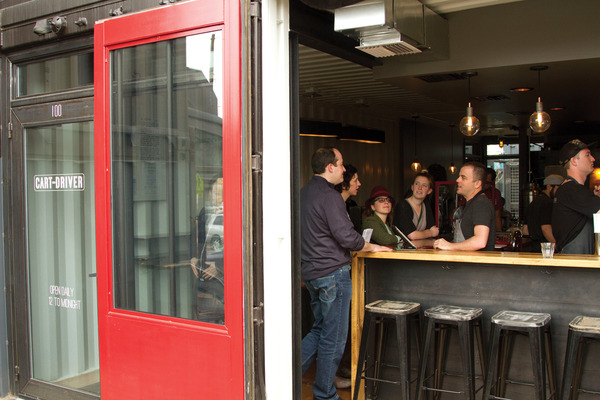 Over time I realized that what makes Cart-Driver so spellbinding, however, isn’t just the food, but also the philosophy behind how the ingredients are procured. While many of the nation’s toniest pizzerias are importing San Marzano tomatoes and Caputo flour, Whitaker is honoring Italian flavors with American ingredients. With the exceptions of a more-than-200-year-old dough starter from a volcanic island in the Gulf of Naples, those Calabrian peppers, and a few aperitifs and digestifs behind the register, this team is showcasing some of our country’s very best ingredients. They use Bianco DiNapoli tomatoes grown in Yolo, California. They make dough with 00 flour from Central Milling in Utah. Horseradish pickles on a charcuterie plate come from Denver’s the Real Dill. When in season, basil and kale grow on a garden plot one block away. “We would rather our product travel no farther than need be,” Whitaker says.

Limited travel is a philosophy Whitaker first learned in, as my great-grandfather called it, “the old country”—long before “local” became a labeling buzzword. After studying at Hotel Institute Montreux, a hospitality school in Switzerland, Whitaker traveled to Italy, where he delved into Negroamaro grapes and cooked at a locals-only restaurant. Not far from where the slow food movement and its tenets were born, the chef learned the value of working with ingredients that had crossed only a few plots of land, rather than oceans. Comparing his experience in Italy to cooking stints in Oregon, California, and China, Whitaker says, “It wasn’t that the kitchens were better; it was that things were coming from the backyard. When I left Italy, I didn’t take the ingredients of Italy—I took the idea of Italy.”

Flavor is Whitaker’s primary motivation for championing less-traveled, American-made products, but there is more to it than that. He is also thinking about his carbon footprint, supporting domestic industry, and even, it seems, celebrating American cuisine with the fervent love we’ve traditionally reserved for our ancestral cookery. 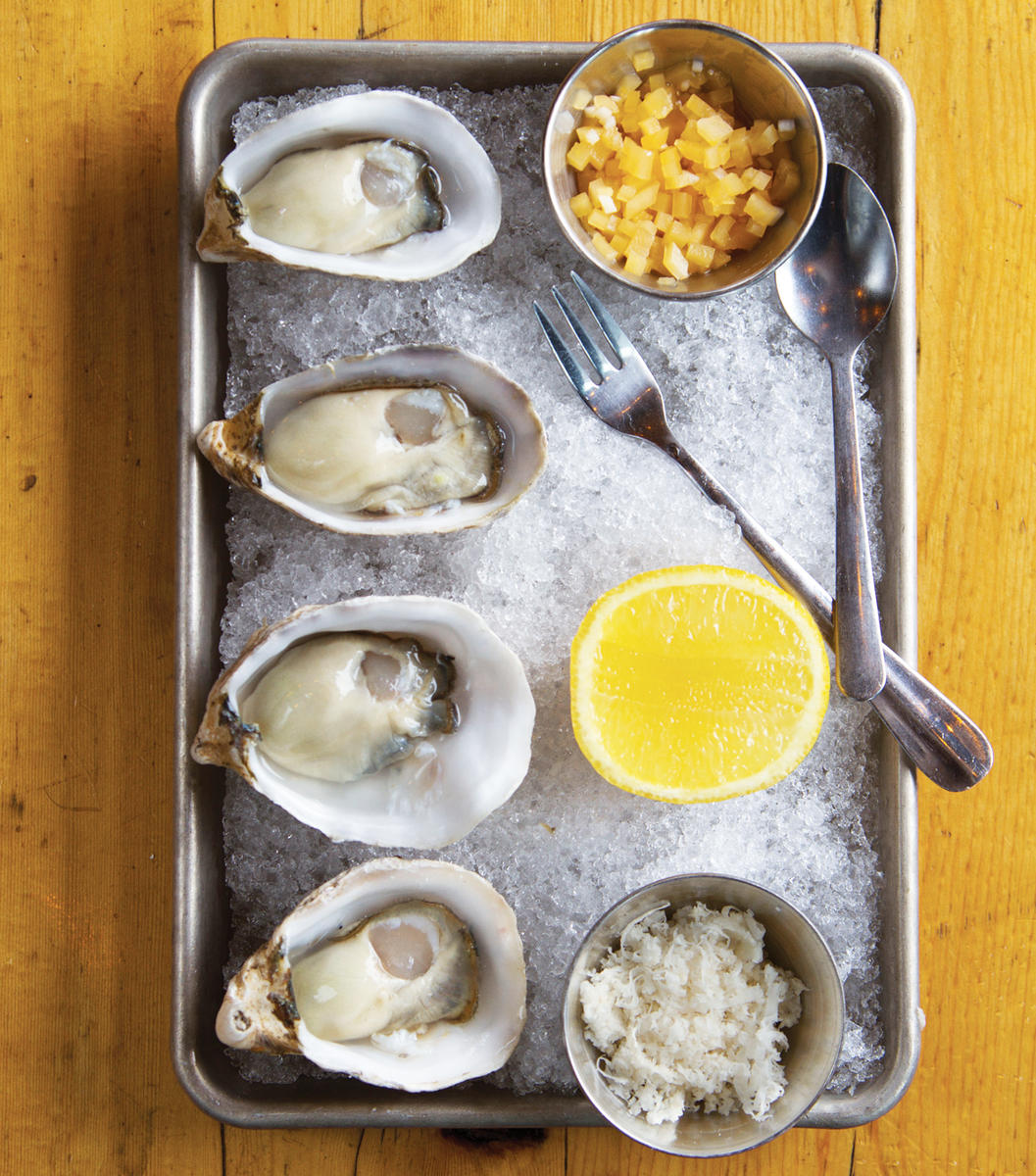 Whitaker has the kind of big-picture passion you can feel the minute you step into Cart-Driver. You taste it in almost every bite and remember it during any rare ones that don’t meet the mark. There were a few shards of shell in one platter of oysters, for example. During another meal, the focaccia and mostarda served with a chicken liver mousse were too sweet. Cart-Driver’s gluten-free pie—inspired by farinata, the thin chickpea cake—was delicious but didn’t necessarily satisfy a pizza craving. (It would benefit from simply moving to another section of the menu.) Even in a shipping container, I wanted the chopped salad of cabbage, radicchio, olives, and fava beans in a vessel other than a paper bowl. I was surprised when staffers didn’t know if a Pinot was Old World or New.

But despite these persnickety criticisms, nearly every guest who joined me during my meals practically ran back to Cart-Driver on their own clock and dime. (One couple now goes so often that it was their newborn’s very first restaurant, and the staff knows the six-week-old by name.) On my last visit, as I gazed at oak-fueled flames dancing in the reflection of the glass that encases Cart-Driver’s shiny Berkel slicer, I knew that I too would soon become an off-the-clock regular.