I first ate at Mister Tuna upon returning from a trip to Japan, where even a megalopolis like Tokyo ticks like a fine Swiss watch and the backstreet izakayas are often tiny and cozy, sometimes run by just one person. That’s not the feeling you get from Mister Tuna, my reintroduction to American gigantism. The room, part of the Industry community on Brighton Boulevard (not far from the Source), seems as if it’s half a block long and factory-high. You can sit at the long bar, or in a lounge-y area, or at regular tables, or at a raw-bar counter, or facing the big kitchen’s wood-fire grills, upon whose spits turn crackling roasts that throw off seductive smells. There are muscular, slightly odd design touches everywhere. Over the bar, for example, long chains dangle from the ceiling, ending in big C clamps that grasp enormous blown-glass olives that contain old-timey filament bulbs. A huge mural of a full-lipped face with wild and wavy hair dominates one end of the room. After dark, the vibe of the place is dim and industrial, and on the nights I was there the hip-hop music was cranked up a bit too high.

Mister Tuna is part of chef Troy Guard’s booming TAG Restaurant Group empire, which over the past 10 years has put forth a broad swath of concepts, from burger bars and Chinese joints to a dessert-centric restaurant. Guard is a serious, versatile chef, with Asian-flavor chops and sociable Hawaiian roots. (The restaurant’s name pays homage to his grill-happy island father’s nickname.) His cooking is more sophisticated and personal than Mister Tuna’s restaurant-industrial-complex design might suggest. 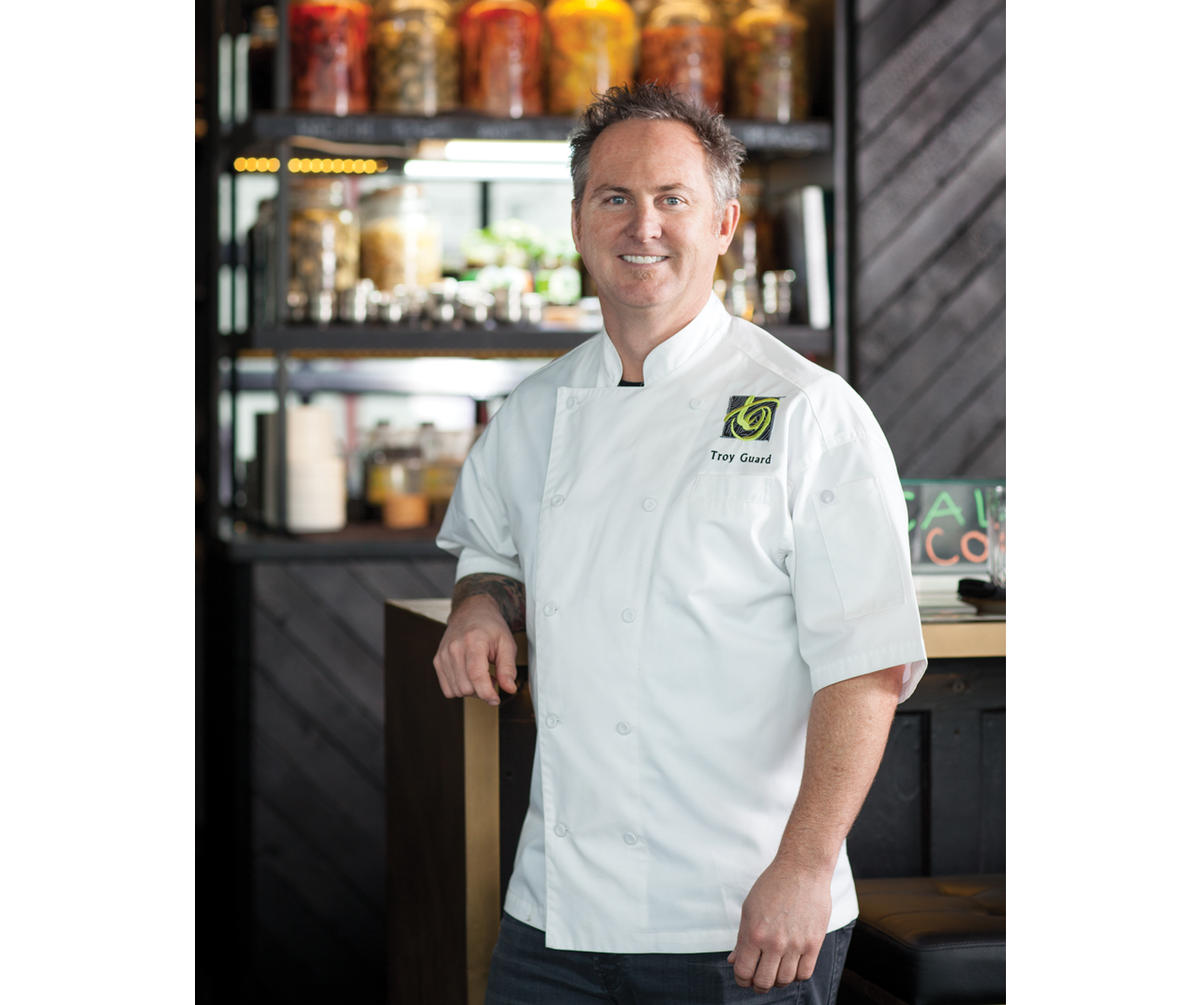 The menu favors diners who like to share: There are lots of raw-bar offerings and 14 appetizers, most sufficient for six bites or more. If you’re with a group, it’s wise to choose widely from the small-dish list before moving on to a couple of sharable entrées.

A single diner, on the other hand, can graze happily at the bar, matching one of the hefty yet refreshing cocktails (more on those in a moment) with, say, oak-grilled shiitakes, a plate of scraped albacore, and the house ricotta toast. That’s what I did one night.

Scraped albacore was explained to me as the remains of in-house tuna butchery—bits of the fish gathered into a rustic tartare, which came bearing traces of fresh horseradish and a little salad of greens and nibbles of red grapefruit. The server poured yuzu vinaigrette over the whole plate, urging me to mix things up. The dish deftly played the flat quality of raw fish against bright citrus notes. Another night, we had the wild salmon, which was barely seared and served, adroitly, with hearts of palm and tart kombucha.

As for that ricotta toast: It’s a solid addition to the National Toast Craze. The bread was whole-grain and rugged. Along with the milky cheese and crunchy pear, it came with bits of funky, house-made pork-cheek bacon and a drizzle of balsamic. All together, the flavor effect was odd but pleasant, evoking—of all things—sweet pancake batter. Maybe there’s a retro-comfort thing going on with these toasts: Another night, the Mister Tuna toast, with its vinegary caponata, red peppers, and tinned-style tuna, reminded me of an appetizer my mother made for her bridge club decades ago.

The heart of Mister Tuna’s menu is the wood-fire grill, whose flames flash orange on the gleaming metal of the kitchen. Fire gave the aforementioned shiitakes as roasty and concentrated a fungi flavor as you’ll encounter. Caramelized leeks added sweetness, while a preserved lemon vinaigrette was as salty and tart as a sailor in a David Mamet script.

Oak-grilled Pueblo yams, meanwhile, arrived in ebony sections, with crispy, papery exteriors that held soft candy flesh within. They were, quite simply, the Best. Yams. Ever. They were so good, in fact, they didn’t need the coriander yogurt or guajillo jam that accompanied them. On another night, we devoured velvety grilled delicata squash with goat ricotta and a granola of pumpkin seeds and oats.

But the flame-born masterpiece was an entrée: spit-roasted pork collar. This is a neck cut which—brined and turned over a slow fire until it’s moist within and crunchy on the edges—combined the fatty exuberance of pork belly with the meaty gravitas of a roast. Thick slices came with a green salad, roasted potatoes, mustard vinaigrette, and pickled mustard seeds. It was astonishingly good.

Not everything cooked over the fire fared so well. Confoundingly, the hanger steak was tenderloin-bland, married to a reduction that was weirdly neutral, a cypher-sauce. Other misses included a plate of carrot agnolotti—with carrot purée, candied nuts, and a Thai-style carrot-top salad—in which the pasta purses were wizened. A mushroom pizza had a bit too much fiery Calabrian chile for everyone else at my table. (It was fine by me, though, as I like that sort of pain.) Overall, there are too many ingredients in several dishes, which can veer from casual in presentation to simply messy.

Mister Tuna’s dessert list consisted of just two offerings—odd, given the emphasis on sweets at Guard’s Sugarmill restaurant. With only fudge cake and pumpkin pie to choose from, we opted for the latter. Soon we received a lesson in the perils of deconstruction: Plops of pumpkin purée tasted of raw squash. Dollops of cinnamon cream added…not much. Chunks of dry biscuit stuff would have been shamed by supermarket pie pastry. And, God help me, there was a scattering of microgreens, as if the salad station was given a last-minute vote.

These are correctable problems. Most things knit together cannily at Mister Tuna. The service is helpful, friendly, efficient, and informed (although one night our waiter inquired about our general well-being so often that I felt I was in a Portlandia episode). 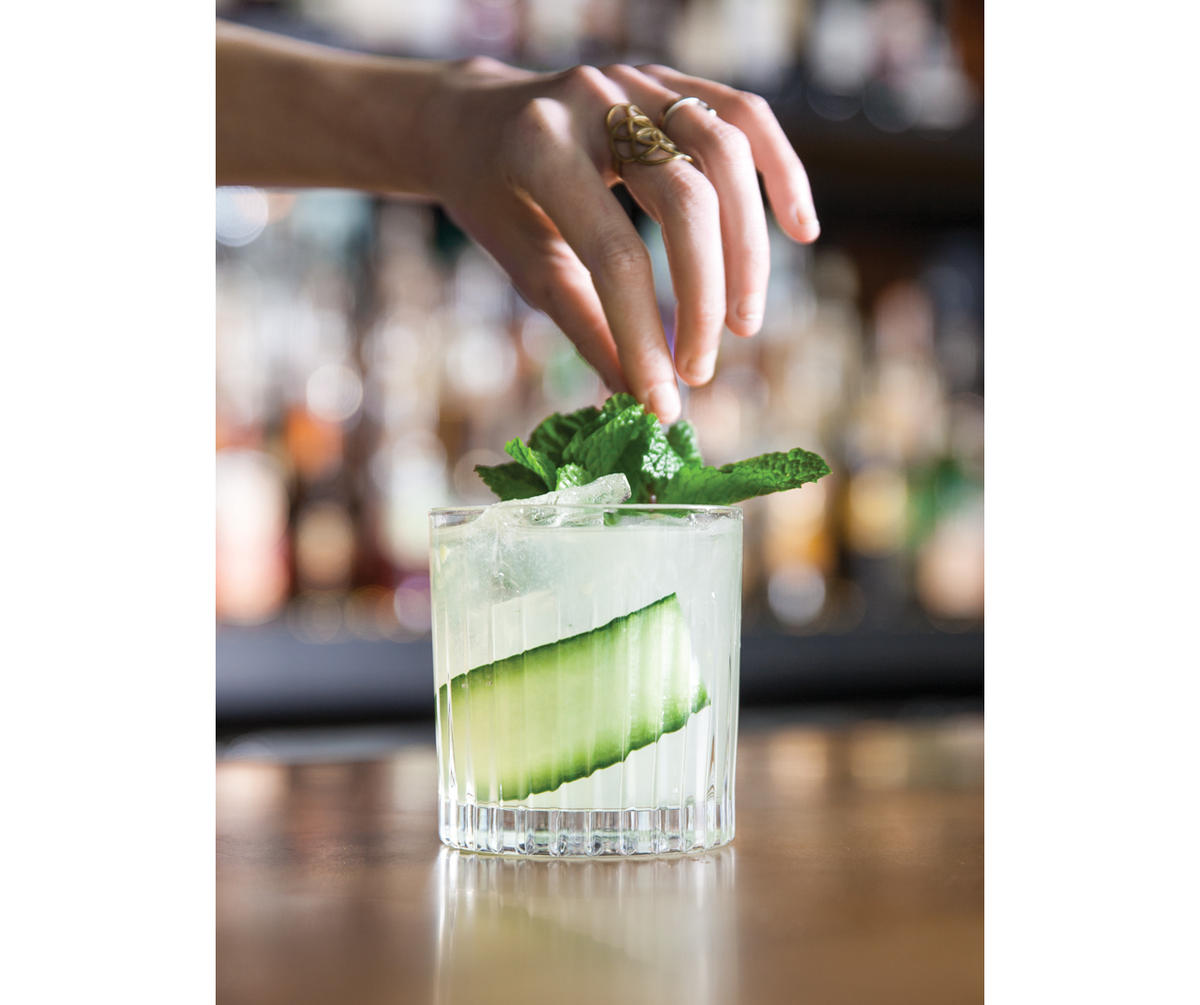 The bar heeds mixology trends without turning every cocktail into an apothecary experiment; the drink menu favors tart, not overly fancy concoctions with big chunks of ice in ample glasses. I liked the Impulsive Sour (lime, whiskey, and beet juice), the Green Drink (lime, gin, vermouth, cucumber), and the Palomazo (tequila, blood orange, and grapefruit soda).

The upshot of this restaurant’s sprawl is that there always seems to be an oddity around the bend. Consider—and I rarely raise this issue in restaurant reviews—the restrooms. Someone decided that the industrial vibe required WCs festooned with punk-club splatter paint and graffiti that tilts toward the vulgar.

Such is Mister Tuna, which manages to be gigantic yet quirky, industrial yet friendly—advancing the primitive warmth of the grill but perhaps dancing a little too hard for its own good. The kitchen is capable of expert wood-fire cooking (those yams! those mushrooms! that pork collar!). Its raw fish offerings have the lively touch of modern Hawaiian fare. Those are strengths that, with a little focus, should take Mister Tuna where it aspires to go.