The largest brewery in the MillerCoors empire stretches across nearly 600 acres in Golden. The facility produces 13 million barrels of beer a year, mostly Coors Light, Coors Banquet, and other big-name brands such as Miller High Life and Keystone Light. Deep within the sprawling complex, a six-brewer team known as AC Golden (which is owned by MillerCoors but operates independently) makes comparatively small batches of beer unlike anything else found inside the brewery. In recent years, one AC Golden family of brews in particular, Colorado Native, has significantly impacted the balance of the agricultural industry on the Western Slope. 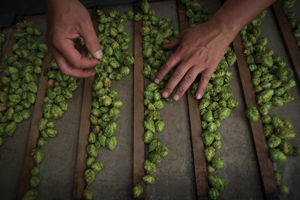 One day this past summer, AC Golden head brewer Jeff Nickel and his team boiled the sugary, tealike liquid known as wort, which forms the basis of all beers. Nickel used barley grown in the San Luis Valley and water from nearby springs in Golden’s valley. Brewer Jason Meherg wrestled a 40-pound bag of pelletized hops from a box in the freezer to add to the wort. Information displayed on the side of the box described the hops Meherg had chosen: the variety (Chinook), harvest year (2014), and alpha acids (13.4 percent), the chemical compound responsible for beer’s pleasantly bitter bite. Next to the description there was a stamp that read “COLORADO.”

In 2009, AC Golden’s president, Glenn “Knip” Knippenberg, wanted to start a line of beers brewed with all-Colorado ingredients—a relatively straightforward endeavor, except for the hops. Oregon and Washington produce a vast majority of the hops grown in the United States. Sparked by demand from AC Golden, a small number of farmers in towns such as Olathe, Paonia, and Hotchkiss—areas best known for sweet corn, onions, or even wine grapes—converted acreage to the state’s newest cash crop. It took until 2011 for farmers to produce enough hops for Colorado Native to be advertised as 100 percent Colorado-grown. Now, with a nascent hops industry taking hold on the Western Slope, due primarily to AC Golden’s MillerCoors-backed financing, the question is whether Colorado’s hops-farming business will ever grow beyond its biggest client.

Hops, the female flowers of the plant Humulus lupulus (a relative of cannabis), have been used to flavor beer for more than 1,000 years. Today, more hops are grown in the United States than anywhere else in the world. Almost all of those American-produced hops are grown in one region: the Pacific Northwest. The Yakima Valley in particular offers the perfect combination of long, sunny days and low humidity. Conditions there are so ideal, says Chuck Skypeck of the trade organization Brewers Association, hops farming elsewhere in the country mostly died out decades ago; growers, he says, simply couldn’t match the Yakima farmers’ productivity.

The recent boom in craft brewing—U.S. production increased by nearly 18 percent in 2014—has made hops a premium agricultural product. And many of the same conditions that make the Yakima Valley ideal for growing hops are plentiful on the Western Slope, including, crucially, long-held senior water rights. (Hops are a thirsty plant.) In 2007, a poor European harvest created a worldwide hops shortage, causing some varieties to jump tenfold in price. At the time, Colorado farmers took an interest in growing the high-yield, high-value crop. Then, two years later, Knippenberg had the idea that became AC Golden’s Colorado Native project. Still, with almost zero in-state production, MillerCoors decided to pay a substantial premium—five times more than average prices—to encourage local farmers to grow hops. (AC Golden has since dialed back its prices and says it now pays closer to the industry average.) Eager to diversify from their traditional crops, several farmers were interested but were unschooled in how to grow the plant.

They turned to Colorado State University agronomist and longtime homebrewer Ron Godin. By chance, Godin had started trialing hops six years earlier as a side project to see which varieties might grow on the Western Slope. “Some of the European varieties don’t grow well here because, I think, they evolved for higher humidity,” Godin says. But other varieties, such as Chinook, Nugget, and Cascade—ideal for popular American-style beers such as India Pale Ales—do really well, Godin says.

Most farms started small, with only a few acres. It takes several seasons to reach full yield, and hops farming is expensive. Godin estimates that, from the roots of the hops plant known as rhizomes to irrigation to the trellis systems needed to train the vines to climb to labor and processing at harvest, a farmer can expect to spend $10,000 to $15,000 an acre to start—not including land prices. By contrast, crops like corn cost less than $1,000 an acre. Despite that math, farmers slowly entered the business, drawn mostly by the high prices paid by MillerCoors, which buys roughly 75 percent of Colorado’s total hops output.

Others, including Misty Mountain Hop Farm’s Ron Munger and David Warren of High Wire Hops, were more ambitious. Munger now has 30 acres devoted to hops, the largest operation in the state, and he plans to add 10 more over the next year. He sells about 85 percent of his hops to AC Golden, but he also sells to other breweries. Warren cultivates eight acres and sells to dozens of breweries, including AC Golden. In all, Colorado has roughly 125 acres of hops in production today, with at least 50 more planned in the next year or two. Still, that’s tiny compared to Washington state, where 32,000 acres are devoted to hops and single farms spread across hundreds of acres.

Warren is appreciative of AC Golden having taken the lead in helping to establish the Colorado hops-growing industry; at the same time, though, he believes it’s important to diversify. “We like to connect with as many breweries as we can,” he says. “Some growers put in their hop yards just for the varieties used in Colorado Native, and they have no other outlet.”

Colorado ranks third among states for the number of craft breweries per capita with 235 total, and dozens more are slated to open in the next year. Existing breweries are also expanding. Denver’s Great Divide Brewing Company opened the first phase of a new facility in RiNo this summer, which gives the company the option to, over time, triple production. Thanks to a strong locavore trend, many breweries have begun to think more about using hops grown in Colorado—but low availability and, Skypeck says, lack of consistency and quality can keep them from making the switch.

Some brewers say there isn’t enough supply to satisfy even modest needs. Denver’s Our Mutual Friend Brewing Company (OMF) says about 90 percent of its beers at any point in time are made with all Colorado hops. OMF, however, is a tiny brewery, even by craft standards, so it’s easier for it to get the amount it needs. Sam Scruby, head brewer at Boulder’s Upslope Brewing Company, says he’d love to use more Colorado hops; however, for its line of popular canned craft brews, he would need thousands of pounds. “We’re signing hop-supply contracts for several years out,” Scruby says, “and we can’t find that kind of volume in Colorado.” Right now, larger breweries such as Upslope, New Belgium Brewing Company, and Left Hand Brewing Company use Colorado hops primarily in fresh-hopped beers brewed in limited batches just after the fall harvest.

AC Golden’s Knippenberg is sensitive to the impact Colorado Native has on hops farming in the state. He says MillerCoors won’t sign up more farmers unless the growers it currently contracts with are unable to meet AC Golden’s needs. He’s also aware of hops farmers’ narrow customer base. “I don’t want MillerCoors to be the only brewer buying Colorado hops,” Knippenberg says.

But without the premium money from a MillerCoors contract, farmers might not have a way to acquire the financing needed to expand. “They’d have to be able to get a higher price to put that infrastructure in,” says Bart Watson, chief economist at the Brewers Association. “It becomes a little bit of a chicken-and-egg problem. I think in order to grow, at some point, some people—either growers or brewers—are going to have to take a little bit of a leap of faith and invest beyond maybe what’s comfortable.”

Like just about everything else in the craft beer world, AC Golden is growing. Knippenberg says he hopes to increase production of Colorado Native from 10,000 barrels to 25,000 barrels by the end of 2017. That growth is partly the result of a strategy to expand Native via a range of year-round and seasonal sub-labels: an India Pale Lager (IPL), a saison, an Oktoberfest, and, for the first time last month, a hyper-local Olathe Lager, made from barley, corn, and hops sourced from farms in Olathe.

To successfully grow 150 percent in two years, AC Golden is going to need a lot more hops. These days, even Knippenberg is a little nervous about supply. In a good year, Munger says he can get 2,000 pounds of hops out of an acre—more than most Yakima growers. But yield is only part of the equation. Ideally, Knippenberg would like to bank a two-year supply of hops. Right now, he doesn’t have it. One catastrophic harvest could put production of Colorado Native at risk.

And by early 2018, it’s possible that Colorado Native could be handed off from AC Golden to MillerCoors proper, which might expand production even further. (If that happens, decisions about Colorado Native would be made on a corporate level, not by Knippenberg.) The handoff could lead to more investment by MillerCoors in local hops production. But if the availability of large amounts of local hops ever became a barrier to expansion—and Coors decided to source hops from elsewhere—the market could crash. “We’ve had more than one farmer tell us, ‘If you were paying Yakima prices, we couldn’t afford to do this,’?” Knippenberg says.

Perhaps the most hopeful sign for Colorado’s hops industry is that growers such as Warren are consciously trying to sell to other brewers—and that he says his operation would still work without premium pricing. As for Misty Mountain’s Munger, his advice to other farmers is this: “Grow hops to grow hops; don’t base yourself on one brewery.”