A year after its founding in 1870, Greeley erected a 50-mile fence around town to keep open-range cattle from gorging on gardens. Today the town focuses its enrichment efforts on aesthetics as much as agriculture: Since 1998, the city has mandated that one percent of capital improvement spending goes to public art. At the end of this month, the Greeley Art Commission debuts the newest additions to its collection: five “art trees,” arbor-esque sculptures planted along Eighth Avenue as part of the city’s revitalization of the area. The commission started last year by paying 10 artists $10,000 apiece to create art trees that the city installed. Eventually the Uptown Tree Project will include 30 sculptures between 10th and 16th streets. Here, a sampling of what you’ll witness when you walk or drive through this urban forest.

1 “A Ute’s Voice” (pictured, above) Reven Marie Swanson, 2014: This sculpture pays homage to the Utes (most of the tribe’s members live on a reservation in Utah, but they once roamed Colorado and parts of New Mexico as well) through colorful arrows that twirl around the support pole. A band of Utes killed Nathan Meeker, who founded Greeley before becoming an Indian Agent (a sort of ambassador to Native Americans), in 1879. 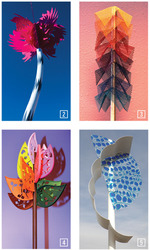 2 “Awareness” Pete Niehoff, 2014: Dr. Seuss fanatics should recognize the Truffula tree, which is devastated by overharvesting in The Lorax. Niehoff, a lab technician at the University of Northern Colorado’s student art studio, has created a sculpture that plays off the book’s theme of conservation—something adults will understand—while still capturing kids’ interest. We’re guessing Cindy Lou Who would approve.

3 “MoirÉ Tree” David Farquharson, 2015: The Aurora artist designs interactive sculptures and exhibits (including for the WOW! Children’s Museum in Lafayette). But in Greeley, Farquharson eschewed interactive lighting for the moiré effect: patterns imposed on each other to produce the illusion of motion. All you have to do is hit the gas to alter the movement, though Greeley probably frowns on that.

4 “Aeternum Folia” Ken McCall and Leslie Dixon, 2015: Sometimes a tree is just a tree. The sculpture’s name (Latin for “eternal leaves”) and colorful foliage represent nature and the march of the seasons. Mostly, though, this Idaho duo wanted to forge a beautiful, graceful piece that would catch attention. Consider us rapt.

5 “Cloud Tree” Barbara Baer, 2014: There’s not much to this tree, and that’s by design. The Denver-based artist knew it would be installed in a hectic urban environment, so she sought to fashion a serene respite—a place to stick your head in the clouds for a few minutes.