The Drawback
On busy nights, the timing can suffer—cocktails are tardy, pizzas arrive too soon.

Chef Kelly Whitaker didn’t work his way up through some sort of polite, professional advancement program. Instead, like most chefs, he was hazed. He washed dishes for a year in Fort Collins. Worked hot pizza kitchens in Italy. Lost 10 pounds in six months while learning how to endure the rages of red-faced chefs who didn’t give a flying fork about him. He was humiliated for not cutting carrots correctly (Wolfgang Puck, Spago). Insulted for insufficient salting (Quinn Hatfield, Hatfield’s). Good enough never was. Days off simply weren’t.

Is it any wonder that by the time Whitaker, 36, opened his first restaurant, he named it “Basta,” which is the Italian word for “enough”? You can almost picture him, hands up, palms forward, begging it all to end. “Basta! Basta! Enough already!”

But the adversity Whitaker endured on the way to owning his first restaurant didn’t cease when he cut the ribbon on Basta three years ago. He’d signed a lease for a space in what has to be the most uninspiring location ever—a nondescript, half-empty condominium complex called the Peloton on Arapahoe Avenue in Boulder. It’s almost impossible not to be cool in Boulder; yet somehow, this obscure location manages it. “We didn’t have much to go on financially,” Whitaker says, by way of explanation.

Armed with an affordable space, Whitaker set about achieving his vision of a wood-fired pizza joint that would turn out pies like those he’d learned to make years earlier in Naples. But it didn’t quite work out that way. Not long after opening, the pizza trend took hold and suddenly, Basta had lots of competition from restaurants in better locations. (Can you say Pizzeria Locale and Pizzeria da Lupo?)

Undaunted, Whitaker sallied forth. He became one of the first restaurateurs in the Denver-Boulder area to submit working plans for sous vide cooking to the state health department. He added more entrées to the menu. He continued to obsess over and perfect all manner of details: the cut and cure of the oak used in his oven; the 200-year-old starter used in his pizza dough; the ratio, in grams, of garlic to oil necessary to make the perfect purée.

Slowly, steadily, diners began to notice, and today, Basta has become the kind of place people seek out. And yet, it retains an air of the undiscovered.

The humble space is small and easy to settle into: concrete floors, open ductwork, a smattering of tables, and a single blazing wood-fired oven—there is no stove on site. The stack of cut wood by the door reminds you of how your meal is prepared. But Whitaker’s cuisine is so delicate and sophisticated that if you didn’t know about the fire thing, you’d never suspect it.

Take Basta’s chicken liver mousse—an appetizer presented in a small glass jar and topped with a thin orange layer of bittersweet Aperol gelée—which is smooth and dense with aromatic hints of fennel and brandy. Although it’s served with soft, warm slices of citrus-rosemary focaccia, you’ll be tempted to forego the bread altogether and spoon half moons of the delicate mousse directly into your mouth.

The generous serving of white burrata (a cheese so silky and rich it means “buttered” in Italian) in a small cast-iron skillet broadcasts several unexpected flavor notes. First, there’s a base layer of slow-cooked leeks that lends a bit of oniony sweetness—although, they are too large to eat easily. The melted leeks are folded into a parsnip purée that offers earthy creaminess. The chewy burrata sits on top of this, and a welcome dash of salt comes from a sprinkling of guanciale, an unsmoked Italian bacon made of pig’s jowl. All these ingredients are necessary to bring the dish to life. If you’re a vegetarian hoping to avoid pork by ordering it on the side, the dish will be disappointing.

The majority of Whitaker’s dishes are like this: Every element must be united for the dish to work. His duck rillettes is best when forked along with whole-grain mustard, a slice of pickled garlic, and salt flakes. The skin-on, whole striped bass, expertly cooked with papery-crisp skin, doesn’t leap to life until it’s dipped into the small crock of fish fumet and drizzled with a squeeze of lemon. Then there’s Whitaker’s slow-cooked short rib. Instead of a long, slow braise in a sauce that can obscure the meat, he takes short rib and cooks it sous vide (under vacuum) for 48 hours, creating perfectly pink and tender meat. Then, he pops the meat into the 1,000-degree wood-fired oven just long enough to sear it with a thin crust. This is as close to perfection as you can get with a piece of meat—and no saucy cloak is necessary. Whitaker centers the undressed meat on a thick wooden plank and surrounds it with accoutrements: flaked sea salt, shaved horseradish, tart crème fraîche, and a savory jus. A small crock of smoky potatoes puréed with celery, parsnip, onion, and garlic and a few knobs of roasted cauliflower complete the dish. At first sight, the preparation is straightforward. At first bite, you’ll learn it’s anything but.

Whitaker’s deceptively simple approach is evident throughout the menu. This light-handed technique extends to the pizzas, which aren’t obscured by haphazard toppings. Rather, a careful selection of flavorful ingredients—sausage, rapini, mozzarella, chile flakes—works together to sate your palate. The lasagna isn’t layered with thick strata of sauce and cheese. Instead, there is just enough lamb, just enough béchamel, and just enough roasted tomato sauce to make the dish memorable. The menu itself also communicates this stripped-down method. There is just one chicken, just one fish, just one meat.

In fact, this is the real reason behind Whitaker’s choice of the word “basta.” Why offer diners a choice of five beef dishes when one expertly prepared short rib is enough? Even the dessert menu—two sweets and a handful of ice cream flavors—is streamlined, making the choice easy. (Do yourself a huge favor and order the campfire vanilla bean ice cream; a flaming log thrown into the ice cream base creates the smoky aroma.)
Although Whitaker may have had enough professional hazing by the time he arrived at Basta, you won’t be able to get enough of this small safe house of a restaurant. Seek it out. Ignore the location. It’s worth it. 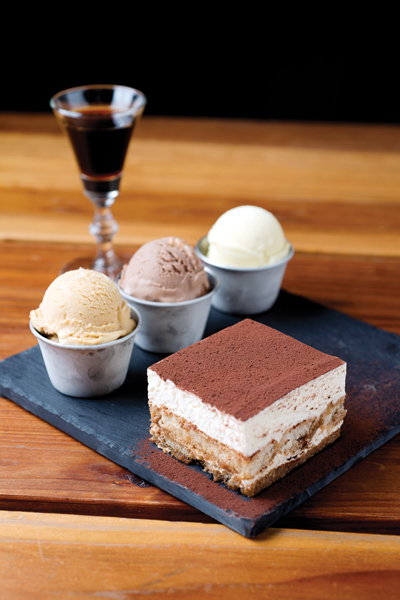