I’ve always taken solace in shoe size. Unlike all the other numerical markers we acquire in this data-driven world—age, weight, credit rating—shoe size rarely changes. I’ve been an eight since around age 13. So imagine my shock when, on a recent trip to the new Boulder Running Company location in Cherry Creek, I discovered I’m actually a nine in running shoes. “You want about a thumbnail’s worth of room between your toe and the end of the shoe so you don’t jam them, especially when your feet swell,” sales supervisor Sam Van Leuven says.

An Exercise and Wellness alum from Brigham Young University, Van Leuven manages BRC’s Saucony Stride Lab, which comprises a $90,000 treadmill with high-tech sensors and four cameras that record and measure everything about your form. The lab, which opened in April, is one of only 11 of its kind in the country and the only one available to runners for free in a retail environment. Make an appointment here and the 10 seconds of running—and subsequent analysis—will teach you more about how you run than your high school track coach ever did.

Not only does the Stride Lab’s treadmill have a smart motor (meaning it adjusts to your speed), it measures how much energy your body generates and is decked out with load cells that determine ground force reaction, or how much impact your body absorbs with every step. In my case, that’s between 1,300 and 1,400 Newtons. The number doesn’t really matter. Discrepancies between your feet do, as they can suggest an injury on one side. Changes in Newton measurements when wearing different shoes can provide intel on which shoes cushion your feet better.

While the perspective is far from flattering, Stride’s rear camera can capture a number of running foibles, among them “hip drop”—meaning the trailing hip sags, which can stress your IT band—and pronation, which happens when the ankle collapses in, causing increased force on the inside of the knee. The lab’s sensor data is displayed with arrows over the video, showing you exactly how force travels through your body. If you’re an overpronator, as I am, Van Leuven will fit you with a stability shoe that has a stiffer midsole on the inside of the foot to help correct
the movement.

Avoiding unnecessary effort can be the difference between a good race and a bad one. Enter the ceiling camera, which reveals superfluous arm and shoulder movements. Your shoulders shouldn’t dip forward, and your arms should stay tucked next to your body, moving mostly straight ahead, as my left arm does, not swinging wildly across your body or out in wide arcs, like my right arm.

The lab’s side cameras capture foot placement. Runners with good form land each step with a slightly bent leg; this allows their bodies to absorb the force of their stride with their muscles instead of their bones and joints. Achieving this often requires simply decreasing stride length. This angle also shows whether you’re using your hamstrings to pull your leg back (good) or simply rotating your hips (bad).

5280.com Exclusive: Find the perfect shoe for every foot. 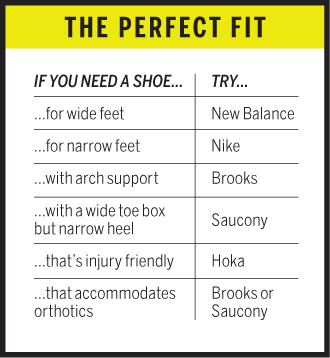