While the 2018 Food & Wine Classic in Aspen dished up all the luxurious eats, stellar sips, and celebrity-studded parties that you’d expect, this year’s festival felt different. In the wake of icon Anthony Bourdain’s suicide and the recent announcement that Prune chef-owner Gabrielle Hamilton plans to partner with accused sexual harasser Ken Friedman at the Spotted Pig in New York City, mental health and workplace culture in the age of #metoo were constant topics of conversation. Read on for our top moments from the weekend.

Ashley Christensen’s oysters with house-made crackers. The Raleigh, North Carolina-based chef of Poole’s Diner (among others) led industry attendees into the festival with a knockout dish: grilled oysters topped with buttery, flaky, scratch made oyster crackers.

Snail caviar. Yes, you read that correctly! Although the size and firm texture of White Pearl Caviar (or snails’ eggs), prevents you from mistaking the delicacy as the real stuff, we know from experience that the pearls can be a great garnish. The best example of this is at the Catbird Seat in Nashville, where we once ate steak tartare garnished with flower petals and snails’ eggs. If you see it on a menu, give it a try! 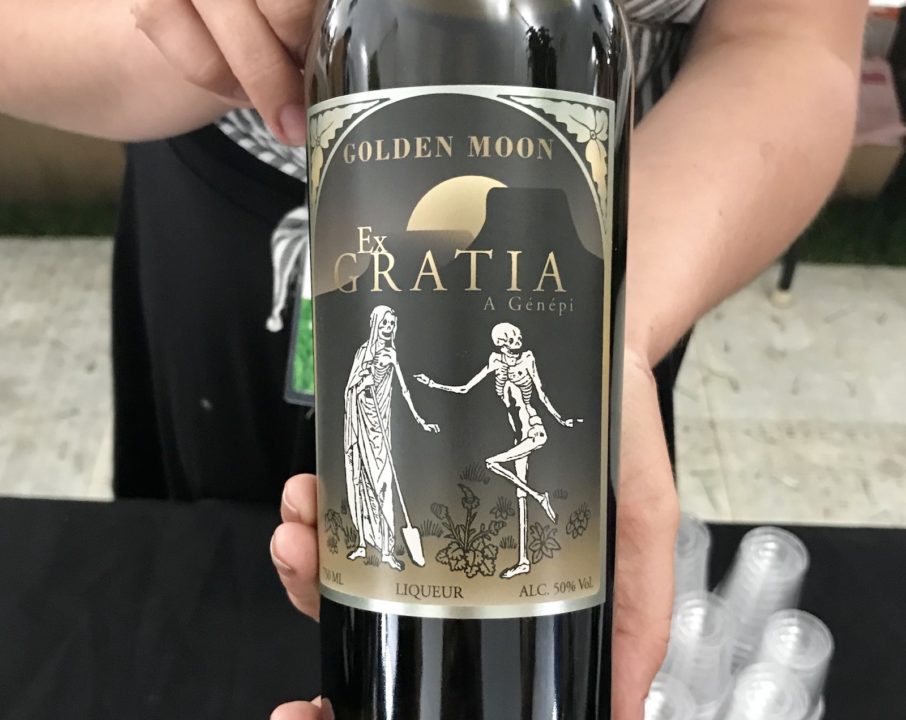 Golden Moon Distillery’s Ex Gratia. This Génépi-style liqueur (an herbal spirit infused with wormwood and other botanicals) quickly won us over in the Grand Tasting tent with its rich, bittersweet flavor. We weren’t the only ones: RiNo Yacht Club’s Mary and McLain Hedges worked Ex Gratia into the strawberry-basil Hobie Cat Cobbler cocktail—our favorite mixed drink of the always exemplary American Express Trade lunch (see more from that event below).

Seedlip’s Garden 108. In what has to be one of the more mind-boggling Grand Tasting discoveries, Seedlip is the world’s first distilled nonalcoholic spirit. The elixir is distilled with botanicals (like gin) but then the alcohol is entirely burned off. The herbal, slightly vegetal notes of Garden 108 make it a nice complement to tonic water and a squeeze of citrus.

Liholiho Yacht Club’s Yachtdog. Spam has a bad rep on the Mainland, but LihoLiho Yacht Club’s house-made Spam dog has us rethinking the meat product altogether. Battered and fried to a crisp, topped with kimchi and sesame seeds, and served on a buttery grilled Hawaiian bun, chef Ravi Kapur’s salty, just-chewy-enough dog was the star of Saturday’s American Express Trade luncheon at Herron Park.

Blackberry Farm’s Friends and Fellows Ride: Before his untimely death in 2016, Sam Beall, proprietor of Blackberry Farm in Tennessee, was a champion of true hospitality. Now, with the newly established Sam Beall Fellows Program, Blackberry Farm offers a program to help aspiring young professionals “become more well-rounded and knowledgeable, with immersive, hands-on experience and close-up seeing and learning in some of the world’s best places.” The foundation celebrated with a kick-off bike ride on Thursday morning from the Little Nell Hotel in Aspen up Castle Creek Road to the Pine Creek Cookhouse. A “peloton” quickly formed, with Lance Armstrong, Craig Lewis, Frasca Food & Wine’s Bobby Stuckey, and the Little Nell’s Carlton McCoy in the lead. Mary Celeste Beall, Sam’s widow and the current proprietor of Blackberry Farms, rode along with about 30 others in the pack. After making the 35-mile loop, riders and other influentials reconvened at the Little Nell for a luncheon in which Blackberry Farm’s executive chef Cassidee Dabney and the Nell’s executive chef Matt Zubrod collaborated on a menu. As Mary Celeste toasted Sam and the Foundation, she said, “bringing together the hospitality, dining, and cycling communities is a triple whammy of a way to kick off the Fellows program and impact the future of the culinary and hospitality industries.”

Yacht Rock After Dark: Bar Helix’s Kendra Anderson returned to Aspen to host her seventh yacht-themed party. We’d argue that this year’s bash—held on the upper terrace of the Gant—was her best yet. In addition to fabulous wines and cocktails (think: sparkling gimlets, spiced daiquiris), Anderson included an amari bar and Il Porcellino Salumi was on hand to feed attendees with its marvelous charcuterie.

Rosenberg’s Bagels pop-up brunch: Josh Pollack treated Aspen-goers to fabulous bagel sandwiches, cured fish, and caviar on Saturday morning. Sure, we can get the Standard sandwich here in Denver, but when else can you pair it with an Aperol spritz and eat it with a view of Aspen Mountain from Aspen Kitchen’s sunny deck?

Verlasso Salmon and the Infinite Monkey Theorem’s sustainable aquaculture dinner at Lance Armstrong’s home: Say what you will about the infamous former pro-cyclist, Armstrong opened his Aspen home to about 50 guests so all could learn about—and taste—responsibly-farmed fish. Verlasso Salmon’s Jennifer Bushman previewed an incredible documentary short, Full Circle: Journey of a Waterman, that you can watch here; Ben Parsons, winemaker-owner of the Infinite Monkey Theorem, poured his wares with every course. Locals Justin Brunson (Old Major) and Alex Seidel (Mercantile Dining & Provision, Fruition) worked with Adam Sappington, Barton Seaver, and John Tesar on the menu, which featured sustainably farmed and utterly delicious bass, halibut, arctic char, and, of course, salmon.

The Champagne and sushi party at Matsuhisa: This bash is one of Aspen’s most difficult to get into—and one of the rowdiest. Stellar bubbly (like the Frederic Savart L’Ouverture Premier Cru and Paul Bara Brut Rose Grand Cru Champagne Bouzy) flowed freely, made-to-order hand rolls and bites of sushi were everywhere, and Aspen’s finest definitely got loose on the dance floor.

Wine at the Mine: Infinite Monkey Theorem’s beloved Smuggler’s Mine party was, as usual, a who’s-who of Front Range talent. Along with TIMT’s canned vinos, party-goers enjoyed fare from the Inventing Room, Oskar Blues Fooderies, Method Coffee Roasters, High Point Creamery, the Regional, and many more…despite the rain.

Bonus: The best event we couldn’t get into came about thanks to Food & Wine’s editor-in-chief Hunter Lewis and journalist Kat Kinsman, who decided to take a mental health moment, inviting any attendees from the restaurant industry (read: no media) to come together for a cathartic chat session in the wake of Anthony Bourdain’s suicide. Lewis later shared that about 30 industry folks gathered to talk about their mental health journeys and current states of mind in a warm, open conversation. Kudos to everyone involved for bringing self-care into a notoriously non-stop event.

“We’re going toward, not going away. We don’t share a bloodlust, but are prepared to go forward proudly. I’m leading. It’s the right way.” —Gabrielle Hamilton, chef-owner of Prune in Manhattan, on her decision to partner with the Spotted Pig’s Ken Friedman

“The leadership at Prune is beautiful. This new leadership move could be good too, but it can’t be a hall pass to a predator.” —Hugh Acheson, chef-owner of 5&10 and the National (among others) in Atlanta, Georgia and culinary director for Punch Bowl Social

“We do this [run restaurants] because we love making magical worlds in a world that needs more magic. We live by the 95/5 rule: Ninety-five percent of the time we manage as closely and carefully as possible. Five percent of the time we spend foolishly and recklessly. That’s where we create memories that last a lifetime.” —Will Guidara, co-owner Eleven Madison Park in Manhattan

“If you don’t like washing dishes, you shouldn’t be a chef. It’s what we do.” —Traci Des Jardins, chef-owner of Jardinière in San Francisco (among others)

“When I was starting out, it was only men—and only French men—in the kitchen. But the people who taught me how to cook were women. I decided that when I get that opportunity, I will hire differently.” —Marcus Samuelsson, chef-owner Red Rooster, Ginny’s Supper Club, Street Bird Express, Marcus B&P, and others

“I think we all give. I’m a cook. I give people food.” —Jose Enrique, chef-owner Jose Enrique of Restaurante, Capital, and Miel in Puerto Rico, on his efforts to feed the people in his community after Hurricane Maria

“Sharing food with other people is an emotional transaction. It is not a financial transaction.” —Andrew Zimmern, TV personality and cookbook author

“Cooking with Shorey has bridged a gap between you two.” —Claudine Pépin, daughter of Jacques Pépin, on how being in the kitchen together has brought Jacques and his grandchild, Shorey, closer