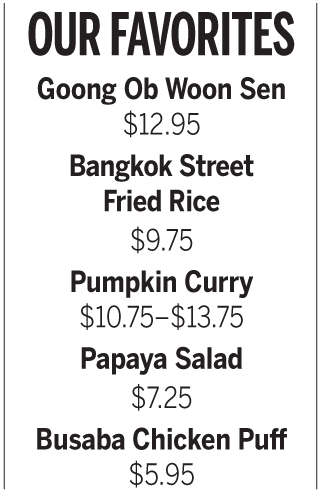 Every diner has a dish by which he or she measures a kitchen’s prowess. It might be rabbit, or soup, or macaroni and cheese. When I’m at a Thai restaurant, that item is goong ob woon sen. I first discovered the noodle and shrimp dish in Andy Ricker’s Pok Pok cookbook, where it’s called kung op wun sen.

When I spotted the Chinese-born, Thai-adopted entrée at Busaba in Louisville, I ordered it immediately and hoped for the best. This was more than just dinner: Having recently moved to the Boulder area, I was looking for a go-to Thai spot.

One bite and I knew I would be back. Cat Phairatphiboon, matriarch of the Thai family that owns and operates Busaba, hadn’t subdued her home-style recipe for the American palate. Creamy cloves of garlic and spicy ginger slices studded a tangle of steamed bean-thread noodles. Smoky bacon and juicy shrimp soaked up the peppery soy-based sauce. I’d opted for medium-hot, and the lingering burn from the chiles was on par with most joints’ spiciest offerings.

On my next visit, a $9.75 order of Bangkok street fried rice was also a hit. In fact, it was this simple stir-fry of scallion, tomato, broccoli, onion, and my pick of fried tofu that secured my devotion. Despite minimal ingredients, the high-heat cooking technique provided a deep, caramelized note—a flavor I’ve since attempted (and failed) to re-create at home with day-old rice.

I’ve since moved from Boulder to Arvada, but I continue to dine at Busaba time and time again for the piquant flavors that have come to feel like home. 133 S. McCaslin Blvd., Louisville, 303-665-0330