I dropped rocks into the drawstring pouch, cinched it tight, and clipped it to a carabiner. Then, with the grace of a gorilla, I tossed it high toward the tree limb, willing the weight of the sack to guide the attached rope over the top of the branch.

I missed. The bag made it 20 feet into the air before reversing direction and plummeting to the ground. It landed in the dirt with a dry thud.

It was late. The sun had already dipped behind the ridge to the west and I was running out of daylight, so the pressure was on to get my food bag strung up into a tree, far from the reach of a bear—and far from my tiny tent. Given that this was my 10th night alone in the woods, you would think I might have mastered the bear-bag hang—but time after time, I botched it.

One last try. This time, it was perfect: good aim, good height. With the rope streaming behind it like the tail of a shooting star, the sack sailed effortlessly over the branch. “Victory!” I cheered—just in time for the bag to swing back and hit me squarely in the face.

I slowly lowered myself to sit on a log, careful to prop up the ankle I had rolled an hour earlier. And as I cupped my throbbing cheek, I thought, Why am I doing this?

It had sounded like such a great idea: I’d backpack the Colorado Trail in its entirety, 486 miles, from just outside Denver all the way to Durango. A strong hiker who frequently adventures alone, I seemed the prime candidate for a solo thru-hike: determined, self-reliant, and so drawn to the mountains I couldn’t resist the urge to strap a pack to my back and walk as far as I could. Besides, I needed a break from my desk job—and if hoofing it across the state in the crisp mountain air would clear my head and free my thoughts, well, sign me up.

After all, this is Colorado. When it comes to the outdoors, “bigger and better” is a way of life, and although I’m not a snowboarder or rock climber, I can walk. And with 35 of the state’s 54 fourteeners under my belt, I know the mountains do something special for my soul. It’s only natural that my Rocky Mountain mentality would kick in: Why backpack for a weekend when I could backpack for an entire month?

So I requested five weeks off from work, began training, planned 30 days’ worth of meals, and organized my gear. On an early morning in late June 2014 (six months before Reese Witherspoon portrayed this kind of lone quest in the movie adaptation of Wild), I hopped out of my dad’s car at the Waterton Canyon trailhead in Littleton. I was off.

Not an hour in, a fellow hiker asked, “Where are you headed?” He probably just wanted to know where I planned on camping that night, but I gave a proud smile, squared my shoulders, and answered, “Durango!”—confident that a month later, I’d be waltzing into town. And when I did, I would join the ranks of Colorado’s boldest, most intrepid denizens.

I have always been a sensitive perfectionist—an unfortunate combination. As a kid, I didn’t want to try anything unless I knew I would win, or at least be good at it. My childhood was spent creating a world in which I was very safe—which meant I avoided any situation in which my vulnerability might be exposed. No risks meant no disappointment and no possible embarrassment.

But eventually, I discovered an antidote to my fear of imperfection: I could become a genuine badass.

In my mind, this new version of myself would live boldly and be callously courageous and entirely self-sufficient. She would do the thing that others didn’t have the guts to do. She would risk big and win big—because a badass never loses, or if she does, the risk is so great that others still admire her chutzpah. Through a series of successful experiments, I learned that by achieving impressive things, I could effectively hide my tender heart and vulnerable spirit. The mentality was intoxicating, melting away self-doubt and emboldening me to the point of resolute fearlessness.

So when I moved to Denver from Nashville in 2010 and was exposed to its inordinate number of overachieving adventurers, I knew I had to do something worthy of becoming part of this special breed. Armed with that vision of myself, I started hiking.

I’d like to say I experienced long stretches of transcendence—but from my very first day on the Colorado Trail, things were really, really difficult.

I was prepared for a challenge. I was prepared for physical discomfort. But I was not prepared for the pain. Because of a few rookie mistakes, on the first day my pack weighed 40 pounds; when I stopped for breaks and unbuckled the chest strap, the pack would drop to the ground like a boulder. Despite quickly shedding a good amount of that weight, I soon developed sores on each of my shoulders, spots where the straps rubbed me raw.

When I made camp on the first night, I pulled off my boots—and my heart sank at the red rawness of what I had suspected: a blister. First it was my left heel; the next day, my right pinkie toe and the one next to it; then the ball of my left foot; then the left pinkie. I doctored them as best I could, but there was no way around the first few days of excruciating pain. Every step was like walking on knives.

The days were hot and the sun was harsh, and soon a heat rash developed all over my face, stretching up over my ears. Within a week, my hands started to crack open—deep wounds that were more like cuts than cracks. I wasn’t sleeping. And when my appetite all but disappeared, I knew that things were bad—because when had I ever skipped a meal, especially after hiking more than 20 miles in a day?

On the 10th night, just before I reached my campsite, I rolled my ankle. Then when the rock bag knocked me in the cheek while I was trying to hang my food in the tree, it might as well have been the truth smacking me in the face: There are enough things in life we don’t want to do that we have to do—and hiking the Colorado Trail is not one of them.

The next morning, I limped 11 miles out of the woods and caught a ride from Twin Lakes Village back to Denver.

It’s a humbling thing to realize that your dream—of yourself and of an experience—wasn’t what you expected. I had spent time and money and effort, and if anything was going to get me back out on that trail, it was the knowledge that the people who love me were rooting for me, cheering me on, and pulling for me to reach Durango. 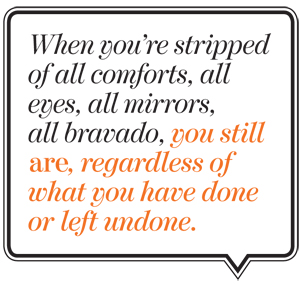 But it’s especially humbling to realize that I wanted the end result—to say that I had hiked the Colorado Trail—more than I wanted to actually do it. Somewhere deep inside, I thought having done a long solo thru-hike would prove to others that I was bulletproof—and more accurately, it would keep me from facing my own limitations. It would negate my imperfections and confirm me as strong, physically and—maybe more important to me—emotionally.

Here’s the truth about what 11 days alone in the backcountry did to me: It made me small. I woke up each morning alone in a tent with no shower, no real conveniences of any kind, and then strapped on a burdensome pack and walked for 12 hours. I applied bug spray like perfume and SPF 100 like my life depended on it (which it kind of did). I squatted in the woods and was swarmed by mosquitoes—often at the same time. I experienced true physical pain.

And yet, I learned a lesson I might never have discovered otherwise: When you’re stripped of all comforts, all eyes, all mirrors, all bravado, you still are, regardless of what you have done or left undone. I realized that no matter what I do or where I go, I am still Annie. How freeing—because when you no longer have to live up to the person you hope you might be, you get to be the person you are. And the person I am learned how to be a different kind of force: one who embraces my weaknesses as much as my strengths, knowing that to own my story, with its imperfections and occasional unfinished adventures, is the bravest, most badass thing I could ever do.

So on day 11, after 177 miles, I called it—not quits, but good. Eleven days on the Colorado Trail had been good enough—and, it turns out, so was I.