On a sunny day in august 2014, Brenda* swallowed a capsule of MDMA—a component often present in the illegal street drug known as Molly or Ecstasy—donned eyeshades, and reclined on a therapist’s couch in Boulder. From the time she was three until she was 12, Brenda had been sexually and physically tortured by her father, and from as early as she can remember, she had suffered from acute anxiety, depression, and hypervigilance, all symptoms of post-traumatic stress disorder, or PTSD. The disorder, which afflicts nearly eight million Americans, had, at various times, compromised her marriage, her career, and her will to live.

Desperate for healing, Brenda, a 38-year-old elementary school teacher in the Denver area, had tried 11 medications and weekly talk therapy for more than 15 years by the time she enrolled in an FDA-approved phase-two clinical trial in Boulder. Established to study MDMA-assisted psychotherapy to treat PTSD, the study is funded by the California-based nonprofit Multidisciplinary Association for Psychedelic Studies (MAPS) and focuses on anyone who has chronic treatment-resistant PTSD, including veterans, emergency-response personnel, and individuals who have suffered sexual and physical abuse. If the study is successful, it will be the first step toward making psychotherapy assisted by MDMA, or 3,4-methylenedioxymethamphetamine, a legally prescribed psychiatric treatment, which could radically change how doctors treat PTSD.

About a half hour after swallowing the MDMA capsule, the drug cast its spell on Brenda. MDMA flooded her brain with the neuro-transmitters serotonin and dopamine as well as the hormones oxytocin and prolactin. She felt, she says, alert and focused—not like she was “tripping” or like she didn’t know who or where she was. “The MDMA allows you to actually feel, to feel the love in the room from your therapists and the love from your loved ones who aren’t even in the room,” says Brenda, who had been apprehensive about using the so-called party drug. “I was nervous about taking MDMA, but my PTSD symptoms were so severe, even after years of conventional treatment, that I was willing to participate in research to have a chance to live.”

Over the course of about eight hours, Brenda engaged in an intense psychotherapy session in which she alternated between discussing her trauma with the therapists and going deep within her own psyche, at times reliving painful scenes of abuse from her childhood. Revisiting the trauma is typical of MDMA sessions. The drug dampens the body’s physiological fear response while heightening the ability for emotional processing, which allows participants to face their traumas without being overwhelmed by negative emotions—a key to the drug’s healing power. “When you walk through the fire and you’re able to stay present, it takes away the trauma’s emotional power,” says Marcela Ot’alora, a licensed professional counselor (LPC) and the Boulder study’s principal investigator (who worked with psychiatrist Dr. Will Van Derveer). In this way, the drug acts not as a medication to address some physiological issue but instead as a catalyst for therapy. “It’s the difference between taking a bus and taking an airplane,” Ot’alora says of MDMA’s therapeutic effectiveness. 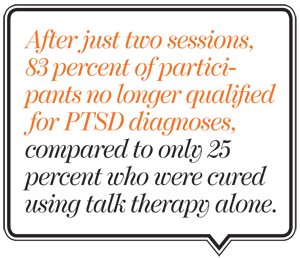 Brenda is one of 110 men and women who’ve taken part in recently completed MDMA-assisted psychotherapy clinical trials in Charleston, South Carolina; Be’er Ya’akov, Israel; and Vancouver, British Columbia (international trials can be used in the FDA approval process, though it’s not yet clear what role these studies will play in the FDA’s final decision). Over the course of about five months, the trials’ participants underwent three to five MDMA-assisted psychotherapy sessions in which they ingested between 75 and 188 milligrams of MDMA (a street dose is approximately 80 to 120 milligrams). The daylong drug sessions were spaced weeks, if not months, apart, and each was supplemented by as many as 27 additional hours of non-drug-enhanced talk therapy.

So far, the studies indicate that MDMA-assisted psychotherapy significantly reduces PTSD symptoms. Standard treatments for PTSD include antidepressants and talk therapy, but results have long left much to be desired. In clinical trials, existing therapies for PTSD were ineffective for about 25 to 50 percent of patients. An earlier phase-two study of MDMA-assisted psychotherapy showed that after just two sessions, 83 percent of participants no longer qualified for PTSD diagnoses, compared to only 25 percent who were cured using talk therapy alone.

Seven years of sexual abuse at the hands of her stepfather brought Renee* to Ot’alora. The twentysomething graduate student from Broomfield endured a traumatic childhood and, as a result, she was suicidal, socially isolated, and overwhelmed by shame, depression, and anxiety that affected her abilities to hold down a job and develop relationships. At 20, Renee was diagnosed with PTSD, and she had tried about 15 medications and four years of talk therapy before enrolling in Ot’alora’s study in March 2015. After three MDMA-assisted psychotherapy sessions, she experienced significant relief. “My PTSD is milder than ever before in my entire life. I feel like I am really experiencing the world for the first time,” she says. Renee credits the experimental treatment with saving her life: “I know now that I will never die by suicide and that I am a good, lovable person with a future.”

Although MDMA has been administered to more than 1,000 subjects with only one report of an unexpected serious adverse event (which ended once the drug wore off), the drug doesn’t come without risks. It can increase heart rate and blood pressure and cause the body to overheat, which can lead to liver, kidney, muscle, and heart failure. (This is of particular concern when the drug is taken recreationally—say, at a club. Medical and recreational Ecstasy aren’t always chemically identical, though; Ecstasy bought on the streets is often cut with dangerous adulterants like methamphetamine.) Long-term use of MDMA may also lead to addiction and cause damage to neurons in the brain. But no study has shown that clinical use of MDMA—taking moderate doses of the drug a limited number of times under medical supervision—causes long-term cognitive damage or addiction, according to Matthew Johnson, Ph.D., an addiction specialist and associate professor of psychiatry at Johns Hopkins University.

Not everyone is convinced of MDMA’s therapeutic promise. “In my view, medicalizing MDMA is [part of] the initial phases of an overall strategy to normalize illicit drug use in the United States,” says Bertha Madras, Ph.D., a former drug czar under President George W. Bush and a professor of psychobiology at Harvard Medical School. “MDMA also has a dark side. It can cause psychological and physical harm: confusion, anxiety, depression, and paranoia, which can last weeks after ingestion,” she says. “The problem with using MDMA for therapeutic purposes is that it is not possible to predict how an individual will react to the drug.”

Madras touches on another criticism of the drug: It can trigger latent mental illness in some users. (Participants in the MDMA trials underwent significant physical and mental screening for conditions such as bipolar disorder and schizophrenia before they were able to enroll.) Despite these concerns, Ot’alora has never had a participant have a negative experience with the drug. “Of all the sessions we’ve done, no one has gone into their trauma and come out on a darker side,” she says.

Brenda and Renee echo Ot’alora’s sentiment. Over the course of Brenda’s five MDMA-assisted sessions, she says she came to better understand her abuse. “I was able to process the trauma and understand that it was something that happened in the past,” she says. “But most of all, it was about remembering the painful things I had packed away. That work was painful but necessary in order to heal.” Today, Brenda is off all of her medications, teaching full time for the first time in six years, and taking a few classes to explore becoming a therapist. She is enjoying a life she never thought could be hers. “I feel like I lived my life with my feet in concrete blocks, stuck in the past. I had tried my hardest to heal, and it wasn’t working,” she says. “The MDMA was like breaking the concrete blocks off my feet, and I was able to climb over the wall and join the rest of the people who are living.”