When general mills patented microwave popcorn in 1981, it was a game changer: Popcorn consumption went from 600 million pounds to more than one billion in 10 years. But in terms of innovation, the industry mostly flatlined after that. Sure, new flavors continued to emerge (Sriracha, cinnamon-brown sugar, or caramel-cheddar, anyone?), but in terms of the delivery method, little changed—until Boulder’s Kristy Lewis got involved.

In 2010, Kristy—just a couple of weeks shy of delivering her first son, Quinn—and her husband, Coulter, took on the microwave popcorn biz. For years, the couple (then living in Boston) had discussed finding a way to restore the snack food to what they knew it could be: healthy, made with real ingredients in an environmentally friendly way, and, most important, cooked in bags made without dangerous carcinogens such as perfluorooctanoic acid, which is also used in Teflon and nonstick coatings. 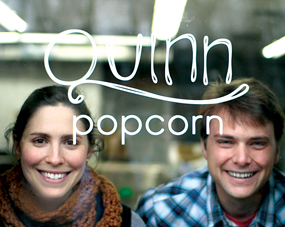 Kristy spent her maternity leave tinkering with fresh flavor options and popping corn kernels in chemical-free paper bags that Coulter sewed together. When her leave was up, Kristy gave notice at her full-time gig at a gaming company and spent the next year obsessively searching the world’s paper sources for a certified compostable paper for bags. During that time, she and Coulter also forged a relationship with Whole Foods Market, and in 2014, they moved to Boulder to be closer to what Kristy calls “a mecca for natural foods companies.”

Quinn Popcorn—which champions transparency, non-GMO and organic ingredients, and a bag that’s compostable and chemical-free—debuted its microwave popcorn in September 2011. Buoyed by flavor combinations such as Parmesan and rosemary and Vermont maple and sea salt, the company has experienced more than 90 percent growth since last year—even as the priciest option on the shelf at $4.29 to $4.99 for two bags.

And now Kristy and Coulter have moved beyond the microwave. The couple recently launched a bagged, ready-to-eat version for those without a microwave nearby (and for folks still tepid about the idea of zapping the snack). We’re currently gobbling up handfuls of the bright green kale-and-sea-salt flavor, but we’re already hungry for what this inventive pair comes up with next.