As the first rays of sunlight struck the Yosemite Valley on June 8, 2014, Jes Meiris reached for the granite wall above her. Suddenly, a piece of gear pulled out of the wall, and Meiris slipped and began to plummet down the rock face. She let out a scream that echoed into the early morning and woke two men camped 75 feet above her. For a rare instant, as she fell, Meiris’ mind was quiet, free of the necessary strategizing of her next climbing maneuver, the inner chatter of self-doubt, or the complicated feelings she was experiencing as a result of a recent breakup with a boyfriend and a falling out with a climbing partner. One small silver nut tethering her to the wall ripped out, then a second, before a third caught her 25 feet later. She jolted to a stop, suspended in midair.

Meiris, who lives in Colorado Springs, had started her quest 11 hours earlier in the darkness, some 1,500 feet below the spot where she now hung. Her goal was to become only the second woman to solo climb the most popular route on the world’s most famous big wall: the Nose on El Capitan in Yosemite National Park. Meiris also planned to complete the climb alone in less than 24 hours, something no other woman had done.

She took a deep breath and waited a few moments for the adrenaline to subside. She assessed the situation in her characteristically pragmatic manner, which had earned the 32-year-old climbing guide the nickname “JesBot.” Am I injured? Dropped anything? No. She looked up. The two men peered down from their portaledge. There was a way out nearby—the last chance for her to easily rappel down the rock. Meiris considered it. This is stupid. What makes you think you can do this? Then, she reached for a hold in the rock above her and
kept climbing.

Meiris was nine years old when degenerative osteoarthritis began to stiffen her growing joints, complicating her life as an otherwise happy kid in an outdoorsy Colorado Springs family. Her father was an avid mountain biker. Her mother, Sigrid Meadows, managed a climbing shop, ran marathons, and frequented the local crags in the 1980s when relatively few women climbed. Meadows introduced her two daughters to the sport when Meiris was five by installing an 18-foot climbing wall in their house. But Meiris didn’t take to the activity. “She was strong-willed, high-energy, and very defiant,” Meadows says.

Meiris spent hours at home crafting jewelry. Her favorite subject was science, but at school she struggled to sit still and focus and sometimes faked being sick so she wouldn’t have to go. Despite worsening pain in her knees and ankles, she excelled at soccer and gymnastics, though she tended to lose interest when her performance didn’t match her type A expectations. “I wanted to walk in and be the best,” Meiris says, “or I wanted to go home.”

After finishing high school at Fountain Valley School of Colorado, Meiris enrolled in Eckerd College in Florida. Four years later, she graduated and moved to Oregon, where she began to confront what she saw as her imperfections. For reasons she never quite understood—perhaps shyness or lack of self-confidence—she was terrified of having her picture taken. To get past her dread of the camera, she convinced a photographer friend to set up lights and take professional photos of her. Once the nerves wore off, she says, “I saw these pictures that made me look powerful in a way I’d never seen before.” 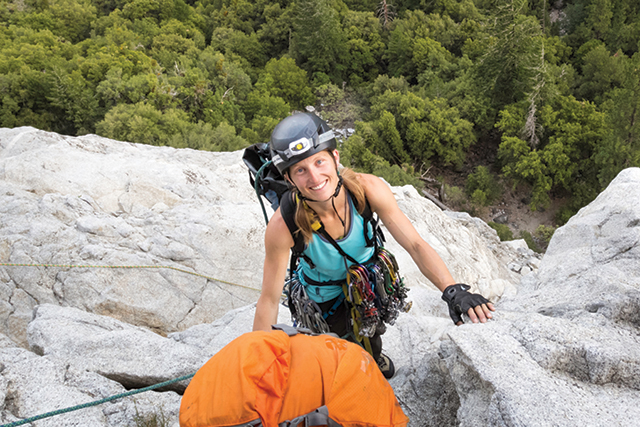 Around the same time, she also rediscovered climbing. She began to understand why her mother had tried to steer her toward the sport. “As a scatterbrained person,” Meiris says, “to have one thing to focus intensely on in any given moment was really attractive.” Meiris became fascinated with the obscure, male-dominated sport of speed climbing. The discipline enabled Meiris to cover terrain in a way that her arthritis made difficult on the ground; her joints ached much more when she ran.

In the most popular form of rock climbing, known as “free climbing”—showcased in Coloradan Tommy Caldwell’s famed 19-day ascent of El Capitan’s Dawn Wall this past winter—climbers place (and remove) gear in the rock as they go to protect themselves if they fall. But they don’t take aid from the gear by pulling on it. Speed climbing is different: Climbers grab gear, use webbing ladders, and will even climb the rope itself to hasten upward progress in difficult areas where holds might be scarce. The speed variety relies heavily on technical problem-solving. Meiris couldn’t get enough.

In 2008, she ascended the 2,000-foot northwest face of Yosemite’s Half Dome in a day with a male friend. In 2010, she tackled the Nose in 21 hours with a new boyfriend, with whom she would spend four years. In 2012, she joined accomplished Estes Park climber Quinn Brett to break the women’s team speed record on the Nose (10 hours, 19 minutes), igniting a fierce competition among women who have been setting new records on the wall ever since. “She shook things up and inspired other women to go big-wall climbing,” says speed climber Hans Florine, who keeps a database of El Capitan records at speedclimb.com.

Meiris and Brett returned to Yosemite Valley in 2013 to attempt to reclaim their Nose speed record, but the two no longer meshed. Brett grew doubtful that they were up to the task and suggested they bail. “Our partnership was just not a good match anymore,” Brett says. Meiris—who had spent months training—was crushed. She began to wonder if her previous accomplishments on El Cap owed more to her skilled partners than to her own abilities. She wanted to prove herself wrong. Meiris decided to return the following season and scale the wall alone.

At 8 p.m. on June 7, 2014, Meiris hoisted her 40-pound pack, loaded with precisely 2,000 calories in snacks, one gallon of water, and gear she’d taken weeks to select, and looked up at the towering wall. Only about 40 climbers had ever soloed the Nose since Tom Bauman first did it in 1969. Only one woman, Jacki Adams Florine, had ever done it. In 2002, Adams Florine took four days to complete the climb, camping overnight in a hammock rigged to the rock face. “I had the luxury of being the first, so I got to take my time and enjoy it,” says Adams Florine, now 51. “It just killed me that no woman ever tried it again.”

The prospect of breaking a barrier for women thrilled Meiris, but she was even more drawn to the idea of reaching her “physical limit,” which had always eluded her. She trained two to six hours per day, rope climbing and bouldering to build arm strength and mountain biking to build endurance. She videotaped her training runs on the Nose, narrating every move on the 3,000-foot climb. She also studied roped solo climbing, which requires climbers to ascend each pitch once, then rappel back down to retrieve their protective gear, then ascend again. On the Nose, that means climbing each of its 31 pitches twice—often in the dark and sleep-deprived. “It’s about grace under pressure,” says Hans Florine, who has soloed the Nose three times. “You have to be able to keep your shit together when stuff goes wrong. And stuff goes wrong.”

On summit day, Meiris put her cell phone on airplane mode to save the battery, tucked it into her sports bra, inserted a set of earbuds—she listened to her favorite band, Tool, while climbing—and ascended into the darkness.

She attempted to stay focused on the climb, but at times she was overcome with emotion as she thought about the relationships she had formed on these rock walls. When she knew she was nearing a spot to rest, she’d switch on her phone and feel the vibrations from a flood of texts from her worried mother, sister, and friends. Without reading them, she cried. “I am not a crier,” Meiris says. “If I had been with someone else up there, I would have stuffed it.”

About halfway up the wall, just as the darkness began to give way to morning, Meiris slipped and tumbled 25 feet down the rock face, waking those two climbers above her. She pushed on, and at 11 p.m. on June 8, after 27 hours and 20 minutes of climbing, she reached the summit of the Nose.

In the off-season, Meiris has settled into a more predictable rhythm. She works as a climbing guide and spends time with her mother. She coaches a climbing team at Fountain Valley High School in Colorado Springs. And in defiance of the awkward, painfully camera-shy kid she was 15 years ago, Meiris also models professionally. One morning earlier this year, she stood before eight students in the cozy second-floor studio of the Alvarez Art School in Colorado Springs and dropped her robe—the students are drawing the human body, and Meiris is nude. She looks striking, with a strong jaw, intense blue eyes, and a ripped physique. And she appears at ease as she shifts from pose to pose.

Ever since she left El Cap last June, disappointed with her failure to break the 24-hour mark, Meiris has considered another attempt. She returned to Yosemite in October to begin the work of preparing for another speed climb. En route, however, Meiris learned that a woman from Idaho, Chantel Astorga, had toppled her solo record, completing the Nose in 24 hours and 39 minutes. After a few training runs, Meiris’ foot ached, and she was plagued by second thoughts. “It felt empty, like I was just there chasing a number now,” she says. “It didn’t feel authentic, so I left.”

Today, Meiris isn’t sure whether she’ll attempt the Nose again or shift her focus toward something else. She says she’d love to join a search and rescue team, or go back to school to be a helicopter pilot, or maybe speak publicly about what she’s learned scaling big walls such as El Capitan: that it’s important to align your goals with your values; that often you can discover the most strength by allowing yourself to be vulnerable; and that, sometimes, the most courageous thing you can do is move on to the next challenge.