In the late 1980s, while backpacking through Europe, Robert Thompson ran out of money in France and was unable to afford a flight back home to Washington, D.C. So he did what any resourceful 18-year-old would do: He cobbled together enough pounds for a one-way ferry ticket to English-speaking London, where he got a bartending job to start saving up. He worked back-to-back doubles, slinging drinks for bricklayers and painters in South London’s Kingston neighborhood. This was back when British pubs served bags of Lay’s “crisps,” not house-made bangers with parsley salad. It would be years before Gordon Ramsay, Nigella Lawson, and Jamie Oliver all had TV shows. And it was long before nose-to-tail champion Fergus Henderson gave a modern face to gastropub fare and the Spotted Pig’s chef April Bloomfield kick-started the infatuation stateside. But three months in that British pub put Thompson in touch with his Gaelic roots. “That was really a watershed moment in my life,” he says—a moment celebrated today by Argyll Whisky Beer, the restaurateur’s modern Denver gastropub.

Located at 17th Avenue and Downing Street in Uptown, Argyll is Thompson’s second crack at the gastropub. When he gave up on the original Argyll in Cherry Creek after three years due to the drawbacks of the subterranean location, Thompson had an opportunity few in this business ever get—a second chance at a restaurant many already considered a winner (the original locale won Westword’s Best New Restaurant award in 2010). Specifically, the restaurateur wanted to further elevate the space, food, and beverage program this time around.

Thompson opened his current take on Argyll in the old Las Margaritas space last June. The spot bears little resemblance to its former self: A white boar of Scotland, mounted with its tongue sticking out, hangs in the bar. A collection of flasks is installed above the hostess stand. In the back room, old leather belts form a piece of art. The chairs for a 12-person high-top are upholstered in a wide plaid textile pattern called Hipster. Servers, who could certainly be referred to by the same name, are united by mismatched plaid flannels. 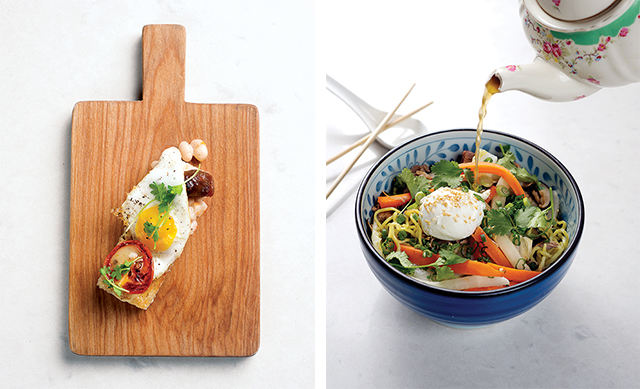 The food is as thoughtful as the curated decor, and you can taste the experience culinary director John Broening brings to every dish. At Argyll, Broening—the 51-year-old known for Spuntino, Duo, the late Olivéa, and the 2003 sensation Brasserie Rouge (also a Broening-Thompson partnership)—turns out food that is refreshingly consistent.

On my first visit to Argyll, I sat at the bar, and the witty pub snack that caught my eye that night remained a favorite across all of my visits. Playfully dubbed English Breakfast, Broening reinterpreted the iconic morning dish in miniature: A crunchy piece of sourdough was topped with a griddled cherry tomato, a fried quail egg, toothsome white beans, and a petite link of smoky paprika-studded pork chistorra made by Broening’s charcuterie maestro Aaron Faulkner. “Part of a gastropub is a playful element,” Broening says. I was also impressed with Argyll’s whiskey-cured Scottish salmon, which the kitchen steeps in George Dickel Rye for three days before subtly smoking it over applewood. The fish comes with precious dill flower buds and sieved hard-boiled egg elegantly sprinkled over it like a dusting of cheese. I gushed over a salad of flavorful, multicolored smoked and roasted peppers that were folded over and lined up across the plate like stripes on a flag. 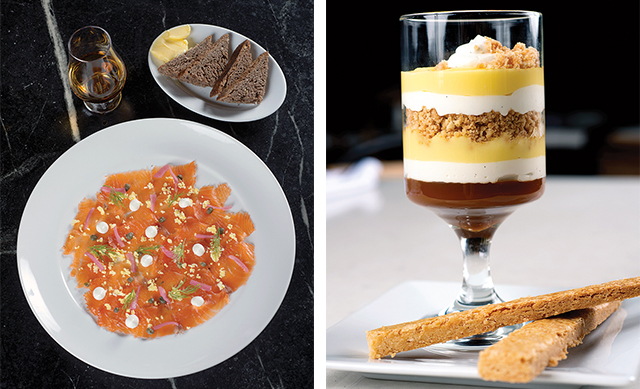 Several entrées were just as memorable. During a lunch visit, I polished off my entire bowl of pappardelle, which was topped with a quenelle of rich, toasty ricotta that is not only made, but also cold-smoked, in-house. Broening’s fish and chips is the most memorable version of the British alehouse classic I’ve ever had. A single enormous hunk of cod was encased in a warm Pilsner batter. It came with inch-thick wedges of thrice-cooked potatoes, a tin of mustard-y tartar sauce, and a scoop of the most incredible “mushy peas.” Mushy? Technically, yes. But strikingly bright green in color and loaded with a generous dose of mint, they were far more elegant than the humble menu description suggested. As is the case in many British pubs, menu options also draw from England’s Asian colonial history. From this arena I especially liked Broening’s Spot of Tea, a bowl of ramen noodles, pickled daikon and carrots, and a poached egg, all steeped in a dark, complex chicken and pork broth.

Desserts at Argyll were also noteworthy. An English trifle, served in the requisite thick-stemmed glass bowl, arrived with bright, creamy lemon curd that was layered with broken Irish butter shortbread and salted caramel. One night, seated under a reclaimed steel casement window that Thompson turned into a whiskey cabinet, I devoured a slice of boozy whiskey Bundt cake that was lighter than its rum-soaked cousin.

Argyll’s whiskey list itself is even more remarkable than the menu items made with the spirit. A 235-bottle list includes selections from Scotland, the American whiskey trail, Japan, India, and Colorado. The restaurant has 21 beer taps and keeps a cellar of special bottles, such as Straffe Hendrik’s wild triple. Bottled beers are poured tableside into pub pints, Pilsner glasses, or tulip-shaped glasses, depending on what you order. 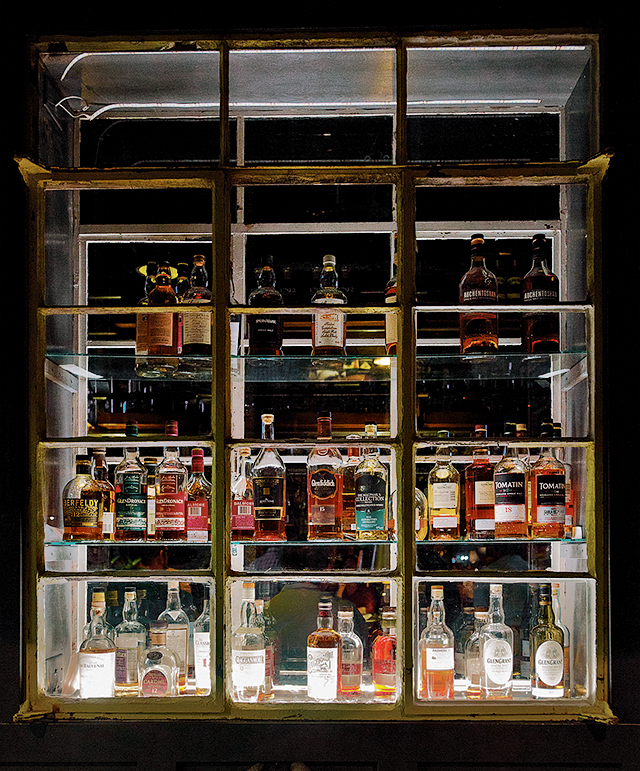 But the beverage program—an element Thompson felt so strongly about amping up that he added “Whisky Beer” to the restaurant’s name—still isn’t fully realized. Opening promises of a cicerone (a dedicated beer sommelier) were gone by the restaurant’s three-month mark. Not long after opening, Ryan Conklin, Thompson’s initial beer whiz and “whisky ambassador,” left. The impressive knowledge and hospitality I got from my bartender during that first visit also quickly faded. By my second meal, opening bar manager Kamuran Mataraci was gone. Thompson then passed the reins to Colin Dart, who also worked with the restaurateur at Punch Bowl Social and the late Le Grand Bistro & Oyster Bar. By this winter, however, Dart had also departed Argyll. Throughout the course of my meals, this revolving door of beverage stars trickled down to our guest experience.

Most nights, servers had to run back to the bar to answer straightforward questions like which state a beer was from. Drink orders came to our table piecemeal, creating awkward delays before we could toast. Refill requests were forgotten. Answers to some queries were never sought. On one visit, I asked our waitress which beer she would pair with the Spot of Tea. She suggested a Thai IPA. Aside from the Asian bent of both items, it was an underwhelming recommendation from a list loaded with better options. I left Argyll that night craving the food and beverage pairing know-how for which Conklin is so respected. (The cicerone, who’s now working at Terminal Bar, later told me that Liefmans’ Cuvée Brut, a cherry-flavored sour brown, would have worked well with the rich broth and acidity in the dish.)

Such stumbles were not limited to beverage service. One night, our entrées arrived before our starters. When we informed the runner that we had not yet received our first course, he left the entrées at the table while he ran around the dining room trying to figure out who was responsible for the error. Our waitress ultimately took them away and later brought our appetizers. When the time came for those entrées, we were convinced that some of our original dishes sat under heat lamps instead of being re-fired. My friend’s cauliflower curry was only lukewarm, and her mother’s cheddar-flavored shepherd’s pie was dry. On another occasion, I had to flag a server down for a spoon. That happens all the time, but before grabbing one, she quibbled with me about what had happened to the first spoon she swore she delivered. It turns out the beverage team wasn’t the only one in flux; I later learned Argyll lost its opening general manager at the three-month mark as well, which might have amplified many of these service blunders.

Despite these shortcomings, there is so much Argyll got right during my meals. I can see myself hitting it again, off the clock, for more of Broening’s intelligent, experienced comfort fare. I’ll just do so with a dose of service patience and some beer buddies in tow. Ultimately, however, it would be even better if Thompson could come up with a team and service protocol that are as consistent as Argyll’s food. In the meantime, I’d be willing to bet a lifetime supply of Lay’s that South London’s painters and bricklayers would be proud of his Uptown gastropub.